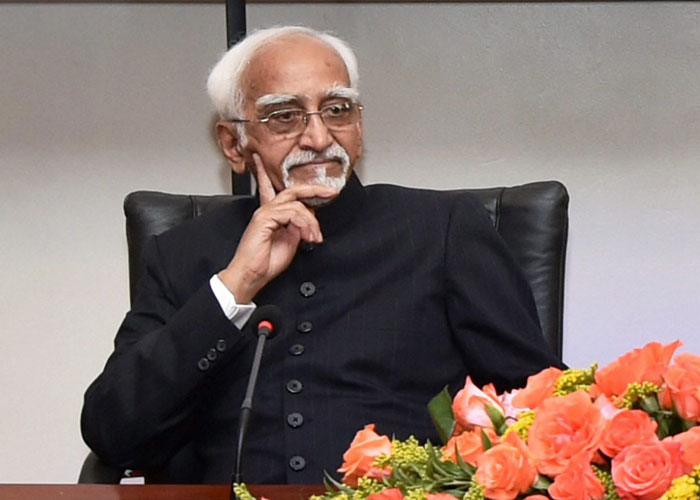 The dust has not yet fully settled in the wake of the deadly salvo fired by the former Vice-President M.H. Ansari (MHA) as he remitted office, and the exquisite and effective riposte by the Prime Minister to the Veep’s rearguard action. Admittedly, Ansari’s petulant act is no longer in the spotlight, only because other important events have overtaken his ranting.

However, it may take quite some time for the cease-fire to take full effect – and let us make no mistake that the action of Mohammad Hamid Ansari amounted to declaration of open war against the Indian Republic. It is altogether another matter that MHA’s efforts proved to be worse than a Chinese pataka sold in the Walled City area of Delhi. However, many major events in history owe their origins to humble events.

Nevertheless, this is the appropriate moment to start assessing the implications of what MHA did. This writer firmly feels that we should not look merely at MHA as an errant and rogue individual, but treat him as part of a coalition of forces and interests that is operating in Indian politics and society. The fellow is probably a minor cog in the whole machine that operated and guided him, but he was an important one at that.  And we will have to dig deep into historical parallels to put the entire episode into a proper perspective.

Over the years, I have attempted to study “regime changes” and the extremely complex interplay of forces and variables that are involved in such transitions. A few years earlier, I had written an essay in this portal on regime changes, focussing on the reasons why and how long-entrenched regimes are displaced and thrown out of power.

In the recent Indian context, our body politic, that had remained more or less stagnant for nearly sixty seven years since 1947, started a process of fundamental change in 2014. The change of rulers in Raisina Hill was by no means a full transformation, but a baby step in that direction. Yet, the forces of status quo rightly interpreted the developments as a critical and existential threat to their roots.

To cut to the chase, we must not mince words, but spell out the entire scenario. The Congress juggernaut (along with its allies) had implanted itself into every nook and corner of the administrative and the power structure of India. NaMo’s NDA government that assumed office in May 2014 was the first credible threat faced by the Gandhi-Nehru-Gandhi (GNG) cabal that had ruthlessly and slyly ruled this ancient civilisation of ours since the transfer of power in 1947 from the departing British imperialists. The short interregnum that India saw earlier between 1977 and 1980 was a minor distraction and kerfuffle for this power elite.

For 10 Janpath, the elections of 2014 were a combined earthquake and tsunami of epic scale. However, entrenched oligarchies do not disintegrate or descend into disarray. Their DNA does not have a panic button. Therefore, the coterie’s High Command set into motion their scorched earth policy against the new regime.

This involved the utilisation of institutions and individuals in equal measure. From the higher judiciary and the media, to academia and every conceivable level of the administration at the Centre and in the states, the moles were given clear-cut agendas to combat the present rulers. There were no Queensberry rules that would be followed; every method, fair and foul (predominantly the latter) was legitimate. The financial resources at the disposal of the GNG gang are humongous and they were suitably placed at the disposal of their entire forces.

Ansari was merely one cog in the wheel of this GNG juggernaut, although this word, even in its anglicised and distorted version, might not be deemed adequately “secular” for this lot. However, Mrs Gandhi junior and her advisers chose cogs that could become battering rams if the occasion so demands. The post of the Indian Vice-President under our Constitution may appear to be a ceremonial one and a distraction. However, unlike the President, the VP also has a critical role in the country’s legislature as the Presiding Officer of the Rajya Sabha.

Even a cursory study of Articles 63 to 71 in Part V, Chapter I of the Constitution, will tell us about the importance of the VP in India’s polity. Apart from being the Rajya Sabha Chairman, the VP also deputes for the President during the latter’s absence, illness etc. Therefore, MHA could, in theory and practice, punch well above his weight at any critical juncture in the country’s history.

However, MHA was made of sterner stuff. As a former mandarin in the Foreign Service, he was fully au fait with administrative procedures and the successful art of file-pushing to keep the current flowing in his favour. His pièce de résistance (as the Lutyens zone glitterati like to say, never mind the pronunciation) was to create a TV channel from public funds that would faithfully sprout the GNG ideology and oppose the new government’s policies tooth and nail. The Rajya Sabha TV channel, staffed from top to bottom with Ansari’s henchmen and women, and accountable to no one except MHA, was truly a master stroke by the fellow.

Thus, the brouhaha about MHA’s devious sniping misses the wood for the trees. Yes, I have grave misgivings about the man’s behaviour and comportment in public gatherings where he studiously refused to pay his respects to the national anthem and to our military heroes. I am equally unhappy about the influence his family ancestors may have had on his psyche. His Aligarh University grooming and his repeated postings in West Asian countries are also factors that could have influenced his world view. And it must be recorded that his extravagant world travels as the VP did not exactly add to his lustre.

However, all these are mere icing on the cake. Without taking away anything from NaMo’s demolition of MHA, I suggest that the latter was a mere walk-on actor or worse, a puppet. The actual puppet-masters/ mistresses are behind the scene and these are the persons and forces we have to combat. Throughout recent history, we have had this phenomenon of scorched earth policies and snipers left behind by fallen regimes. From the White Russians after the Russian Revolution of 1917, to the Royalists in France after 1789, to the Empire Loyalists in the U.S. after 1776, these forces have always tormented successor regimes.

For the record, the Americans treated the Empire Loyalists with brutal efficiency and expelled most of them to Canada. Do the nationalist forces in India have the determination to take on the GNG coterie with the full force of law as soon as possible and with total efficiency?