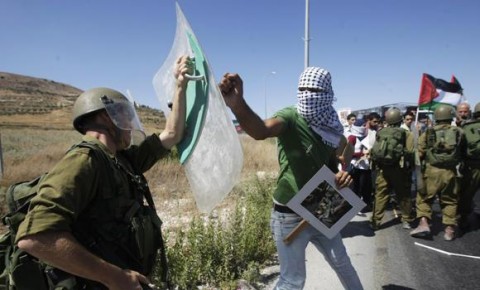 By rejecting a Parliament resolution on Gaza disturbances, External Affairs Minister Sushma Swaraj has given a clear signal to the Opposition that the Narendra Modi government is not comfortable with the appeasement of Muslims and Arabs regarding foreign policy. She rightly said, “Israel and Palestine should have peace talks.”

Earlier, she tried to stop even a  discussion in Parliament over the subject. But Rajya Sabha Chairman Hamid Ansari, a Nehruvian relic and Sonia Gandhi appointee, put petty politics before national interest and allowed discussion. Thus began the charade in which politicians found excuses to placate the Muslims.

Leader of the Opposition in Rajya Sabha Ghulam Nabi Azad criticized the government for the supposed delay in the discussion. He wanted to know if the country’s foreign policy towards Palestine has changed. He blamed the government for being a “spectator” to the ongoing “massacre” in Palestine: “I request the Indian government, the Opposition, the House, and 124 crore people of the country to rise to the occasion on humanitarian grounds. A resolution should be passed… the use of force must stop… prevent further loss of life and property in Palestine. A united appeal must be made. Government must realize India’s stature and walk the talk. Entire House should condemn the attack and pass a resolution.”

As usual, sanctimoniousness and dis-ingenuousness were the characteristic features of the Congress leader’s speech. So, “loss of life and property in Palestine” should be prevented, but what about the persistent attacks on Israel by Hamas terrorists that kill and maim innocent people? There was no call for stopping that “on humanitarian grounds.”

While the Congress response was a mix of half-truths and twisted facts, the Left’s reaction was downright mendacious and dangerous. Addressing the Rajya Sabha, Communist Party of India (Marxist) leader Sitaram Yechury urged the government to stop buying military equipment from Israel. Only a communist can express such treacherous ideas. As it is, our armed forces are short of arms and armaments; our military preparedness is in a mess; the suggestions made by the CPM leader are a recipe for disaster.

Indian communists’ hatred for Israel is pathological. This is the reason he could call Israel’s action as “genocide of sorts.” There was more bombast: “This is against insaniyat (humanity) completely.”

Look who is talking. Yechury believes in the most violent ideology mankind has ever witnessed—communism, responsible for the largest number of genocides and death of over 100 million people across the globe. The Black Book of Communism: Crimes, Terror, Repression, an anthology written by several European academics and edited by French historian Stéphane Courtois, informs us about the horrors that the progeny of Marx and Lenin unleashed on the unfortunate peoples of Russia, China, and other countries. “Communist regimes turned mass crime into a full-blown system of government,” Courtois wrote in the introduction.”

Communist regimes are responsible for more deaths and greater misery for common people than any other political ideal or movement; even Nazism was not so dangerous. The victims of communism suffered executions, artificial famines, deportations, physical confinement, or forced labor.

And yet Yechury has the cheek to talk about insaniyat?

Non-BJP Parliamentarians have their own reasons to castigate Israel: they want to be seen as the champions of Muslims. Most of the media also reacts on similar lines. Therefore, it is not surprising that nobody has pointed out that Tel Aviv was forced to act because of continuous, unprovoked attacks on Israeli citizens from Gaza. The media showed pictures of wounded children, destruction in Gaza, and so on. What nobody revealed was that Hamas has been using human shields for quite some time. In fact, this is part of their strategy. A video clip surfaced on the Net, showing Hamas Interior Minister in Gaza Fathi Hamad boast of Hamas’ willingness and even eagerness to use children and the elderly as human shields. “For the Palestinian people, death has become an industry, at which women excel, and so do all the people living on this land. The elderly excel at this, and so do the mujahideen and the children. This is why they have formed human shields of the women, the children, the elderly, and the mujahideen, in order to challenge the Zionist bombing machine. It is as if they were saying to the Zionist enemy: ‘We desire death like you desire life.’”

Over the years, the Hamas incentivized the ‘death industry.’ Synagogues were burnt. Daniel Greenfield, a scholar on radical Islam, recently wrote in www.frontpagemag.com, “the Christian population of Gaza was cut in half. The Baptists nearly disappeared after a Christian bookstore was bombed twice and its manager was clubbed and shot.”

What happened to the Christians of Gaza was the same thing that had been happening to Christians across the Middle East under Islamic rule, Greenfield wrote. “While the media is focusing on Gaza, ISIS has just finished ethnically cleansing the Christians of Mosul by demanding that the non-Muslim residents of this Iraqi city convert to Islam, pay Jizya or die.”

ISIS is a cousin of Hamas, he wrote. “Both organizations are outgrowths of the Muslim Brotherhood.”

These facts are rarely mentioned either by our Muslim-appeasing politicians or secular media Brahmins.

Against this backdrop, the