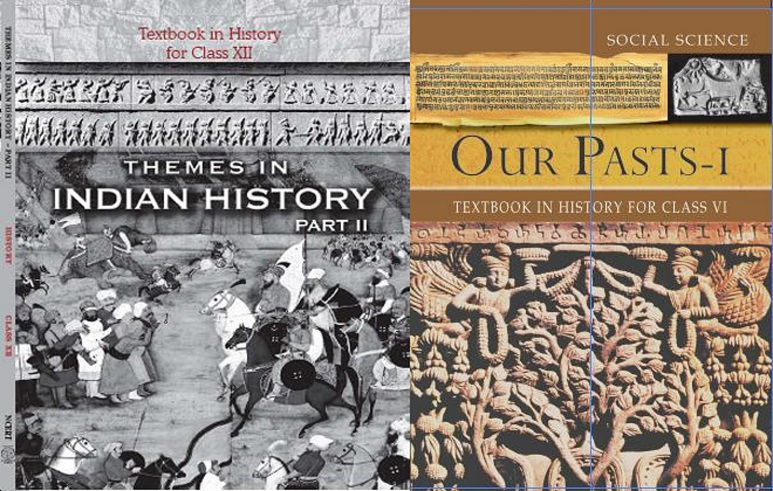 The debate over rewriting the history textbooks of India has been re-ignited and as usual emotions are running high where most of the people are not even aware about the issues at hand.

But this has not prevented them from taking partisan stances and firing the usual clichés, without ever properly examining the flaws in our history textbooks. Of course, in the present textbooks there are several factual errors or the deliberate attempts at whitewashing or obscuring the uncomfortable facts but we should be able to see the problem in its totality. The trouble with history textbooks can be seen under six important categories:

The first trouble with the history writing is that of perspective. It’s true that history is multi-faceted and it is not possible to include all the angles in school textbooks. However, history must be written from the perspective of the general reader and not the rulers alone.

It is therefore a tragedy that the history of India is largely written as the history of foreign dynasties entrenched in and around Delhi and the people of India have been reduced to the footnotes. Especially in the medieval era, it is largely about imperial and brutal campaigns of the Turks, Afghans, Mughals etc. rather than the resistance movements by the people against these oppressors.

In fact, it is difficult to find even the reference of the local dynasties and kings and all we have is the sequence of fratricidal wars or the wars between different foreign tribes and dynasties who invaded India at different points of time. The names like Queen Abbaka are unknown to the people. The example of Queen Tarabai (1675) is illustrative. Our youth would be hard-pressed to recall this great Queen who took the command of the Maratha revolution after the death of Chhatrapati Shivaji and the execution of his successor Sambhaji by Aurangzeb.

Khafi Khan (1731) writes that Mughals underestimated this seemingly helpless woman of two young children. But under the indomitable command of Tarabai, the war spread inside the Mughal territory and Maratha power began its ascendance. In battles, she led from the front, mobilized resources and motivated soldiers drawn mostly from the peasantry. Deccan became the graveyard of Mughals with lakhs Mughal soldiers dying every year in the epic 27-year Mughal-Maratha war.

But the narrative of Mughal-Maratha war is skewed in favour of the imperial Mughals who get a sympathetic treatment as against the Maratha ‘rebels.’ The same is the case regarding the narrative of Indian interaction with Western imperialism. The central actors in our books are the British and not the Indian princes and people. It would not be an exaggeration to say that Indians are absent from the history textbooks on India! The second issue is the monolithic narrative of history which progresses from the Harrapan era to the Vedic age then to the Mahajanpadas and the rise of the first empire under Mauryas. It then shifts to the Guptas and then after Harshavardhana, simply jumps to the Delhi Sultanate followed by the Mughals and the British.

What makes it even more troublesome is the dominance of north India, especially the Gangetic plains in the textbooks which fails to reflect the diversity and plurality, diversity and variegated hues of Indian history. The south finds a flimsy mention with Cholas, Satavahanas etc. the Vijayanagar Empire is largely ignored despite it lasting almost as long as the Mughal Empire and its historical importance in shaping the socio-political and economic milieu of large parts of India.

There is also hardly a mention of the Chalukyas, Gurjaras, Pratiharas, Kashmiri dynasties, Kakatiyas, Rastrakutas, and Ahoms. Do we read about the Eastern Gangas and Palas of Bengal who ruled for four centuries each? Or the Western Ganga dynasty, which ruled from 350 C.E to 1000 C.E? Many times, these dynasties and empires ruled areas larger than the largest European countries for centuries. And then we have the bewildering absence of any history of the Northeast in our textbooks.

Then there is the third issue of the exclusion of Dalits and Tribals from these books. Instead, their role and agency in history is simply denied by presenting their culture and religion as the imposition of the ‘Aryan Invaders’, which needs to be abandoned. In a single stroke, the whole Dalit-Bahujan Samaj is robbed of its culture, ingenuity, history and spirituality, and de-humanised as people lacking agency, reduced to the footnotes of history. The rich line of Shudra and even Dalit kings is also conspicuous by its absence in the textbooks.

Even Kings like Raja Suheldev have no place in mainstream history. Raja Suheldev defeated the 100,000 strong Ghazanavid army in Battle of Bahraich, which held back Islamic invasions of India for more than a century after the depredation of the Mahmud of Ghazni.

The immense role played by Dalits in the first war of Independence is also ignored with freedom fighters like Uda Devi, Matadin Bhangi, Vira Pasi, Chetram Jatav etc find no mention at all. The various agrarian movements led by Dalit leaders like Ekka movement of Madari Pasi are reduced to obscure events despite their massive scale and appeal during the British Raj. Tribal history too is ignored. Students passing out of the schools and colleges are ignorant about the rich tribal communities of India apart from the stereotypical image of ‘backward tribals’ who need to be ‘rescued’.

They gain little, if any, knowledge about the tribal society, polity, spiritual systems and the vibrant tribal kingdoms and culture. Also, tribals were the ones who continuously resisted the western imperialism in every part of the country and paid heavy for the same. This fierce and continuous resistance to western imperialism is one of the most intense and glorious in the annals of the world but which finds only passing mention in the textbooks in the half-hearted information on Santhal uprising etc.

Scheduled castes and Scheduled tribes constitute nearly 25 per cent of the Indian population and it raises serious question marks on the veracity of history writing which treats them as footnotes of history only to be discussed in the context of caste oppression and even there, they are passive entities in the narrative.

The fourth problem is that the history of India is not only written from the flawed paradigm but is also hopelessly outdated. One can say that there are too many ideological debates and too little of archaeology, facts and data.

This sort of history writing is based on the narrow spectrum of sources of history whereas a large number of significant archaeological and literal discoveries in the past few decades have not been incorporated into the textbooks. We have even failed to produce an authoritative translation of the numerous classical texts not only of Sanskrit but also of Tamil, Kannada, Pali and various other regional languages and dialects.

The state of history writing in India can be gauged from the fact that numerous documents, letters, secret communications, contemporary reports in and around the third battle of Panipat are gathering dust in libraries and private collections and have never been studied. And this is the case with just one important event as close in time as Panipat 1761. Also, India has always been a civilization with strong oral traditions. In fact, much of the local histories and histories of the castes and communities have only been preserved in the oral traditions.

But there has never been any systematic attempt to record and analyze these narratives. Instead, most of our history writing consists of references and cross-references within a small group of English language historians with the premium being placed on references to western historians.

The oral traditions are either simply ignored or just randomly picked up to embellish an ideological narrative. With respect to the subaltern groups like Dalits, tribals etc. we see the wholesale dismissal of their oral traditions as ‘invention of history’ either in the Ambedkarite mould or as attempts at “Sanskritisation.” It is a matter of concern that even the sources of the history are seen with the present day ideological blinkers rather than as an honest objective enquiry.

For example, we know that the Pratiharas built a strong and prosperous polity with a powerful military and defended the borders of India for about three hundred years. But what is not elaborated upon is their ingenious and superb water management and irrigation system, which enabled them produce the surplus to sustain such a polity in otherwise arid regions of the western and north-western sub-continent.

There is no reason why history should be a bland political narrative especially of foreign overlords and their shenanigans. History has to be an organic and vibrant entity, which relates to everyday life and India as a living civilization.

The sixth flaw in history writing is India’s interaction with the world down the ages. The strong maritime traditions of India, the spread of its ideas and philosophies across the world and the various influences imported by India are lacking in emphasis.

Human civilizations do not develop in isolation. In fact, interactions with the world is an important part of the history of any country and civilization. It is more so with India, which has exerted tremendous influence on the socio-political and economic development in the Indian Ocean Region and the Central Asia.

India has always had a strong maritime tradition: the world’s first international trading port is Lothal in Gujarat from where Indian ships sailed to Arabia, Iran, Africa and Babylonia, carrying with them not just goods but people and ideas. Harappans maintained trading posts as far as the northern reaches of Afghanistan and as early as 3rd century BCE, Odia sailors were navigating the waters of South-East Asia. These trade relations led to the flowering of the rich tradition of cultural exchange and spread of knowledge systems across Asia.

And in turn, India itself was shaped by such interactions on many occasions. The study of such events cannot be reduced to wars or the accounts of foreign travellers. It has to be a dynamic study involving multiple points of interaction.The textbooks of history, as it stands today, are not only distorted both in content and perspective but also do not present the complete picture of Indian history.Therefore, rewriting history textbooks is a crucial and urgent task if India is to develop a proper historical narrative worthy of its antiquity and to inform its present and guide its future.

(This essay was first published in The Nationalist)