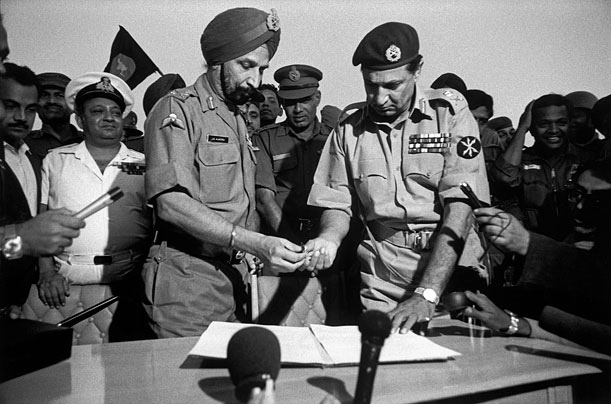 Pakistan and India fought the first Kashmir war between October 1947 and December 1948. At the time of independence, the princely state of Jammu and Kashmir was independently ruled by Maharaja Hari Singh, of the Dogra dynasty. The ruler had the option of remaining independent, joining India or Pakistan. Jammu and Kashmir, demographically had a predominantly a Muslim population, mostly converted during the five centuries of Muslim rule over the region that preceded the hundred years Hindu Dogra rule at the time of independence. Hari Singh was undecided about the path he wanted to choose for his kingdom. The Muslim rebellion soon broke out in Jammu and was the pretext of the Tribal Muslims (Pashtuns from NWFP mostly) and the Pakistani Army to cross over to capture the state. They had begun to run over Hari Singh’s forces. The King appealed to India to respond with military help, and in return signed the formal instrument of accession with India, as required by India, on 26th October, 1947. Indian forces thereafter entered and the protracted battle continued over a year before the formal ceasefire on Jan 1, 1949. At that time, Pakistan had gained significant territory, though India had the majority. At the beginning of the 1947 invasion, the Pakistani forces had advanced without problems before the first resistance at Uri. Pakistan has not halted its campaign since, nor has the theatre of war changed.

Pakistan launched Operation Gibraltar in the late summer of 1965. Pakistani Army had a regiment called Azad Kashmir Regimental Force that today is called Azad Kashmir Regiment. The operation was named after Umayyad conquest of Spain, launched from the Port Of Gibraltar in 711. The symbolism has little to do with India or Pakistan’s own history, but refers to the Pakistani State’s identification with the history of the expansion of the Caliphate. In operation Gibraltar, about 30,000 Pakistani troops infiltrated Kashmir as guerilla fighters, confident that their visions of an Islamic Caliphate will resonate with the majority Muslim population of Kashmir and that an open rebellion would lead to Kashmir’s secession. The operation was a spectacular failure, as the Kashmiris had a greater respect and identification with their own history than that of the Arabian Caliphate. This failed operation launched the Indo-Pakistan war of 1965, with a ceasefire, brokered at the UN by USA and USSR.  By the time the ceasefire was declared, India had the upper hand in the three weeks, ferocious conflict. The Tashkent declaration of 1966 followed. India lost Prime Minister Lal Bahadur Shastri in Tashkent, a national tragedy that has escaped the period historians. The 1965 conflict was the result of Zulfikar Ali Bhutto’s conviction that after India’s capitulation to the Chinese forces in 1962, Pakistan could inflict a decisive defeat on India. He had successfully persuaded President, Marshall Ayub Khan to his point of view. Ayub Khan referred to the infiltrators as Bhutto’s Mujahids.

Pakistan’s disastrous cultural blindness and rejection of East Pakistan’s due political, executive and economic rights, led to disaffection and desire for cessation. In the 1970 general elections in Pakistan, despite winning 167 of 169 seats in E Pakistan, and hence an absolute Majority in Pakistani Parliament of 313 elected members, ZA Bhutto (People’s Party) and President, Gen Yahya Khan refused Sheikh Mujibur Rehman, his due right of becoming Pakistan’s Prime Minister. Yahya, a personal friend of Nixon, responded by unleashing a pogrom on the rightfully dissenting East Pakistanis. The Punjabi (and West Pakistan) dominated Military were set upon their own countrymen in E Pakistan. Operation Searchlight launched the infamous genocide of Bengalis (selectively targeting Hindus), in which a reported two to three million were slaughtered. Countless women were raped and ten million refugees entered West Bengal, causing enormous hardship to the state and India’s economy. The world remained silent in the face of this humanitarian disaster.

American complicity in Indo-Pak war of 1971

The East Pakistanis in the Pakistan army defected and formed part of the Mukti Bahini that India supported. Indira Gandhi, India’s Prime minister, was rebuffed by the American Administration of Nixon and Kissinger, both of whom personally despised her. When Indira Gandhi visited Washington in November 1971, Nixon made her wait 45 minutes before granting audience, and went on to extend his support to the largest genocide of human beings, since the Jews suffered at the hands of the Nazis. Nixon and Kissinger supported Pakistan, a member of the American led military pact CENTO and SEATO. In July 1971, Henry Kissinger had been to Beijing, where Zhou- En Lai went on record to say that they supported Pakistan and would not sit by idly, if India continued on its course of confrontation. It is also a matter of record that Mr. Kissinger confirmed American Support of Pakistan to the Chinese during this visit. On August 9, 1971, India signed the peace, cooperation and friendship treaty, with the Soviet Union, ending its formal policy of non- alignment.

For the record, India’s formal entry into the war in 1971 was in response to Pakistan launching Operation Chengiz Khan with attacks on 11 Indian airbases on December 3, 1971. Once again the symbolism of operation Chengiz Khan is unmistakable. Pakistanis indeed have forgotten that it is their forefathers, who suffered slaughter at the hands of the Mongol Invader. Instead, he was their hero, to be emulated, by invading India. This strange thought process also permeates their naming of missile systems after Ghazni, Gauri and so on.  Pakistan, to this day psychologically considers itself as the remnant lineage of the ‘glorious invading Islamic armies of antiquity’ that killed their forefathers as well.

As the war unfolded in 1971, the US advanced the 7th Fleet with the largest aircraft carrier in the world- USS Enterprise, with USS King, USS Tripoli, USS Decatur and USS Tartar Sam to threaten the Bay of Bengal, while the British Royal Navy sent its fleet led by EAGLE to threaten India’s West Coast. India was saved due to Soviet Intervention, with their nuclear-armed ships and submarines encircling the American Navy. This also warned off the Chinese, who had been requested by the Nixon administration to move their troops along India’s Northern borders.  Britain’s role was nefarious and the UN’s role non-existent.

But, Israel did send arms to India, despite India’s support to Arabs and failure to grant Israel diplomatic recognition until 1992.

India’s decisive victory in 1971 and vivisection of Pakistan, was probably the most humiliating event in Pakistan’s history. Pakistani ruling elites seem to have harbored ambitions of creating an Islamic Caliphate with imposition of the Arab language, Arab Culture and Salafist ideology on their own people and advance the same beyond their borders. Imposition of a single foreign identity on Kashmiris, Baluchi’s, Sindhis and Pashtuns, like the Bengalis, is a delusional and destructive idea no different than ISIL’s goal of homogeneity. Imprisonment of Waseem Akhtar, the elected MQM Mayor of Karachi-the largest city and hub of commerce and culture- reflects the disconnect between the people, their choices and their state.

The 1971 war not only failed to bring circumspection, it actually led to greater reinforcement of failed ideas. It spurred the state into creating, nurturing, training, funding and using radical Islamic fundamentalist forces as an active arm of state policy. This was to be formally supported and organized with the help of the United States, determined to displace a Socialist, Soviet leaning regime from Afghanistan, as the seventies transitioned into the eighties. Gen Zia- Ul- Haq, who removed ZA Bhutto, with alleged American Support in 1977, remained the President from 1978 to 1988, where he became a firm ally in eliminating Soviets. This is the period, when the Pakistani ISI and the US oversaw the creation of an international Jihadi force of Taliban and Mujahedeen Warriors, as tools of the American foreign Policy. This was a symbiosis between the world’s most powerful democracy and the world’s most violent fundamentalist force. America and Pakistan were the parents of Taliban and of the development and promotion of Opium and Heroin trade as instruments of foreign policy (which the Taliban had actually opposed).  Pakistan became a pawn to American goals of planning the demise of the Soviets. In a quid pro quo, the US allowed promotion of the secession of Kashmir through violent jihadi outfits, which it co-created with the ISI.

Once the Soviets withdrew (1988-89) and the USSR officially broke up (December 1991), it became easy to redirect the Jihadis to the Kashmir theater under the new Operation Tupac, which had commenced officially in 1988, under the orders of Zia Ul Haq. Operation Tupac remains in existence to this day with its declared objectives of 1) Disintegrating India 2) Utilizing Spy networks for Sabotage and 3) Using the loose borders with Nepal and Bangladesh to set up bases and conduct operations. Operation Tupac has had great success in comparison to the failed Operation Gibraltar. It is also worth noting that the escalating Khalistan Movement that reached a peak in India in the 80’s had a Pakistani sponsorship with at least tacit US support. The Government of India had protested US involvement and the backing of Khalistan, in a formal protest, duly denied by George Bush Senior, US Vice president in 1984, during his India visit.

* Pakistan’s policy on Kashmir is a publicly declared state policy, e.g. Operation Tupac.  Covert and overt means have been used for more than 50 years and shall continue.

* Trying to prove Pakistan’s complicity in every attack is both redundant and self-defeating given the declared Pakistani policy seeking India’s disintegration.

*The incessant efforts to present evidence to the world makes India looks weak to the very powers that were complicit in letting this happen. It also offers a plausible deniability to Pakistan, which has never hidden its policy goals from the world. India’s interest in stirring debate is a poor cover for unwillingness to have a clear policy of response.

*The media, politicians and interlocutors of India have chosen to mislead their own country into a make-believe world of political solutions, peace and bonhomie through shared culture. They have deliberately obliterated the obvious history between India and Pakistan, since partition.

*To the amusement of the Pakistani Establishment, India stills coddles a culture, which the ruling Military- Jihadi elite in Pakistan, has proscribed for its own country. Officially, Pakistan has chosen to enforce an Arabic monoculture of language (Urdu), dress and theocratic dogma on its own citizens .The Baluchistan freedom struggle, the disaffection of Sindhis and Pashtuns are a testimony to Pakistan’s vision for itself. The creation of Bangladesh is testimony to the same.

Dr Subroto Gangopadhyay is a Houston-based Consultant Cardiologist and member of IHAR (Indian History Awareness and Research). He can be reached at: subrotog1959@gmail.com.