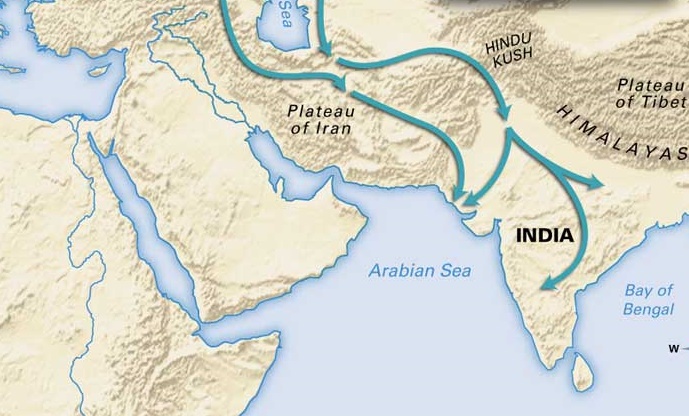 In June 2015, Scroll.in published an article by Shoaib Daniyal on the Aryan debate, wherein he ridiculed the Out of India theory by comparing it with Intelligent Design or a Flat Earth Hypothesis. Here is a brief response by Dr. Koenraad Elst to the article.

While I don’t much mind an ignorant pen-pusher pontificating about the Aryan invasion debate, some concomitant modesty would at least be in order. Ridiculing any scepticism about the 19th-century Aryan invasion theory (AIT) merely shows that he is quite unaware of the state of the art.

So he equates the rivalling Out-of-India Theory (OIT) with Flat Earth and Creationism. But it is very easy to find material evidence against both the latter, such as the fossil record. By contrast, your contributor is quite unable to muster any evidence against the OIT. Even Harvard professor and AIT champion Michael Witzel admits that no material evidence of Aryans moving into India has been found “yet”, i.e. after two centuries of being the official hypothesis sucking up all the sponsoring. So your correspondent thinks himself superior, successful where the greatest specialists have failed?

A year ago I was participating in a Delhi conference on the Sindhu-Saraswati Civilization. While there, I received an e-mail from one of the world’s foremost specialists on the linguistic aspect of Indo-European origins, HH Hock, all the way from the US. Predictably, he upheld the now-dominant invasion scenario and added that no one takes the Out-of-India Theory seriously today (though it was the dominant assumption from 1786 till ca. 1820). Among linguists, this is approximately true: Nicolas Kazanas, Shrikant Talageri and myself have been in splendid isolation in those circles. But then, linguists who can competently argue in favour of the AIT are hardly more numerous. As I have verified at several specialist conferences, most concerned linguists don’t work on the problem of the origins, which has an aura of obsoleteness, and blindly follow the dominant theory because it happens to be what their textbooks contained. Which is what non-linguists like the cited team from Auckland also do.

However, while I read this e-mail, I was surrounded by the creamy layer of Indian archaeology. Each professor read his paper presenting the findings at a particular Harappan site where he was digging, and each of them reported a complete cultural continuity, no trace of an invasion. Sitting next to me was the dean of Indian archaeology, the nonagenarian professor BB Lal. When he was young, he made his name by “proving” that the archaeologically attested Painted Grey Ware indicated the Aryans on their way into India. That “proof” is still cited till today in favour of the AIT, at least in India. But in reality, Lal himself has renounced that hypothesis decades ago, realizing that his posited link with Aryan invaders was itself based on a tacit acceptance of the omnipresent AIT. Today he emphasizes that there is no trace at all of any Aryan invasion.

You choose to poison the debate by insinuating a Hitler reference into it. Suit yourself, but again it proves your ignorance, for Hitler was a zealous follower of the AIT. If the OIT has been associated with Hindutva (wrongly, for VD Savarkar, who launched this political concept, was an AIT believer), its alleged political use is at any rate only a trifle compared to the AIT. The OIT has been upheld mostly in one country for a few decades by a few scholars without any political power. By contrast, the AIT has been used politically for some 160 years by major state actors such as the British empire and Nazi Germany, and in India by Jawaharlal Nehru, the Ambedkarites (though BR Ambedkar himself emphatically rejected it), the Dravidianists, the missionaries and of course the secularists. If you don’t like the mixing of scholarship with politics, you should first of all lambast the AIT, not the OIT.

May Allah (or whoever serves as God to you secularists) give you the wisdom to keep your mouth shut on topics you don’t know enough about.