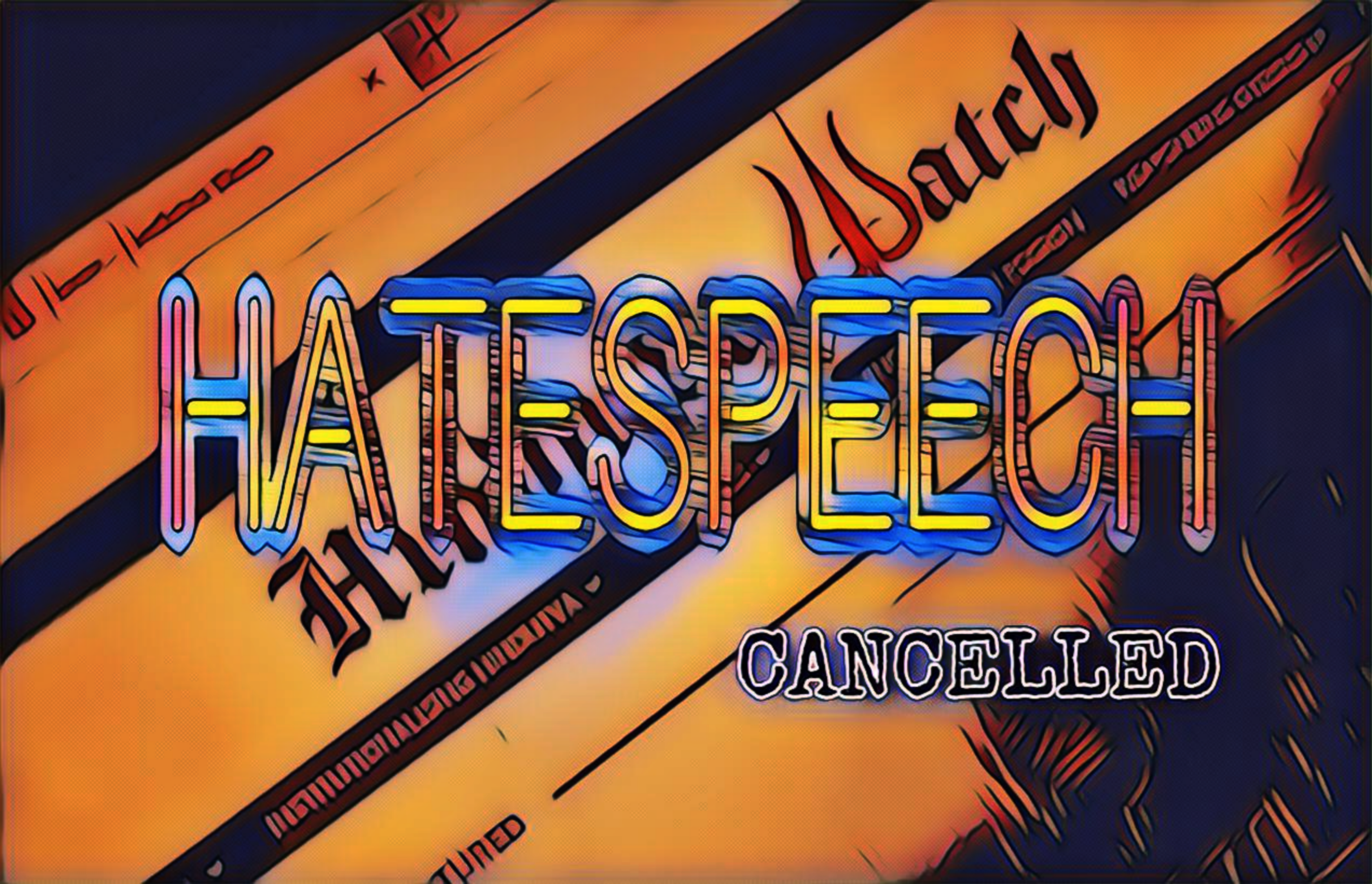 Someone sent me a tweet by some organization called HindutvaWatch (Editor’s note: HindutvaWatch is an anti-Hindu platform whose editors and publishers do not have the courage of their conviction to let the public know who they are, and who funds their hate platform): 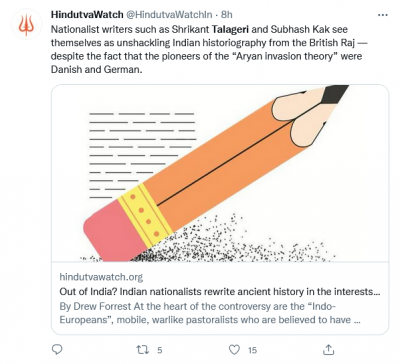 In this world of what many on the “right” not incorrectly refer to as “liberandu” pseudo-intellectuals, Hindu-bashing is a compulsory or mandatory regular: hate speech against Brahmins, Hindus, and Hindutvites is not considered hate-speech at all; on the contrary it represents liberal speech! Since no one is there to defend Hindus from attack or calumny (I sincerely consider the BJP Parivar, usually wrongly referred to as the Sangh Parivar even many times by myself, as one of the most effective among anti-Hindu forces, all the more effective because it has managed to convince Hindus that it is in “Hindutva” clothing, and I never make the mistake of thinking they are there to defend Hindus), these leftists have a field day spewing their hate-filled venom and bile on anything and everything Hindu in a wholly one-sided war. I have increasingly realized that we can’t do anything about these poison-pots any more than anyone can do anything about natural phenomena like death and disease, and we must carry on with our lives and activities without bothering to “reply” to them or try to counter their brazen lies. But occasionally, especially when my name comes up (but not necessarily every time it is brought up), I feel the itch to respond, senseless though it is. This is one such case.

I read through the above poison-pen article by the writer and was not in the least surprised to see it bursting with lies. One of the most hilarious lies, and one which illustrates the totally Goebbelsian and Orwellian nature of “liberandu” discourse is the following: “It is a criminal offence under Indian law for a publication to cause offence to any Hindu” (the italics are in the article)! Which India is the writer (Drew Forrest) talking about? I remember reading Superman comics in my childhood, and the references in them to a “Bizarro World” where everything was exactly the opposite of what prevails in the actual world: such writers seem to be writing from some kind of “Bizarro World” which has somehow succeeded in completely hacking and taking over the communications systems, academia, and media in the actual world. This kind of brazen propaganda illustrates in a nutshell the totally shameless nature of these writers, and how they bank on the utter ignorance-cum-credulity and/or committed evangelistic zeal of their readers.

Here is another joke by this comedian: the OIT is “an expression of “Hindutva”, right-wing Hindu chauvinism, which casts Hindus as the children of the soil and non-Hindus — Christians, Buddhists and especially Muslims — as alien interlopers.” The writer, needless to say, since these writers do not need to read anything in order to pontificate on any subject, naturally ignores everything I have written on this point, including, to give just one example: “Muslim and Christian fundamentalists may identify wholly with their foreign brethren, and some Muslims may even gloat at the idea that they are the descendants of Islamic heroes who ‘conquered and ruled’ a land teeming with kafirs, the fact remains that they are all Indians, as much as the Hindus“ (Talageri, 1993a:46).

But I will refer here only to what he says regarding me:

I will not honor this shameless and brazen liar and sniveling coward by analyzing every falsehood on his part in detail and quoting (again in great detail) from my books and articles as I usually do in such cases, since the man is clearly beyond the pale of honest debate.

Am I using ad hominem and “invective”? Well, I am proud of it if I am, since all critics of Hindus, Hinduism, and Hindutva use ad hominem and invective very consistently in their criticisms, and confidently expect the browbeaten Hindus to refrain from following suit in return for fear of criticism in the one-sided “debate” that these “liberals” delight in, with all the one-sided rules loaded in their favor and stacked against Hindus. But I would not be the writer of my recent blog “Karṇa and Yudhiṣṭira in the Mahabharata” if I allowed myself to fall in with their repeatedly fulfilled expectations from cowering Hindus, so I will indulge in the same kind of discourse that they do.

1. “Nationalist writers such as Shrikant Talageri and Subhash Kak see themselves as unshackling Indian historiography from the British Raj — despite the fact that the pioneers of the “Aryan invasion theory” were Danish and German.”

This liar has clearly not read anything written by me, where I expressly and repeatedly and in detail take on all those Hindus who treat the AIT as the creation of colonial British machinations (or for that matter Danish and German Protestant theology). As I put it about the scholars (British, Danish, German, or whatever): they “were, by and large, reasonably honest; and although they were often wrong, they were naturally wrong and not deliberately so” (Talageri, 2000:404), and I have even written an entire article on my blog site in criticism of, and titled, “Indology-Bashing”, where I express my respect for these Indologists.

In fact, the religion, race or nationality of the Indologists is hardly ever even referred to by me even in passing, or to make some telling point, let alone as a criticism. This Hindu-hating writer, however, in the above article itself, finds it necessary to tell us, in order to make some kind of point best understood only by himself, that David Reich “is Jewish”.

2. “…the “Voice of India” authors, nationalists who often write together and recycle one another’s ideas.“

The fool does not even know the difference between OIT writers and “Voice of India” writers. Voice of India authors (Sita Ram Goel, Ram Swaroop, Koenraad Elst, Harsh Narain, and many others) have written a huge number of scholarly tomes on a very wide variety of subjects, most of them not even touching on the AIT-OIT debate, and on every subject the books have been pioneering works which have broken new ground in every field and occupy a unique position in Hindu ideological writing.

In the case of my OIT books, where in fact I do not quote other OIT-friendly writers at all but exclusively quote only the western AIT-friendly writers to make all my points — something which I naturally should not expect this ignoramus to know — I face at least as great and bitter, if not much more, opposition from “nationalists” as from western academicians, and there is very little “recycling” of my (very very original and un-“recycled”) work by other writers.

In fact, anyone reading Drew’s hate article above will see how much blind and unimaginative recycling Drew himself (like other anti-OIT writers) has done of Witzel’s writings — often using the same words used by Witzel in his totally outdated and discredited critique of my second (2000) book.

3. “Witzel argues that Talageri’s first book, The Aryan Invasion: a Reappraisal, treated the four Vedas and Puranas, mainly religious texts, as trustworthy historical sources for the extreme antiquity of Aryan roots in India. This, he said, did involve a “paradigm shift” — backwards, to a pre-Enlightenment belief in the authority of scripture, just as early 19th-century European scholars regarded the Bible as history. ‘This is not scholarship in the post-Enlightenment sense, but … ultimately a religious undertaking,’ Witzel writes.“

After my three subsequent books in the years 2000, 2008 and 2019 (all of which incidentally represented giant steps upwards based on what I had written in that first book in 1993), it is strange that in the year 2021 this propagandist should be still quoting what Witzel apparently said about my first book, in which I dealt, chapter-by-chapter, with the different kinds of AIT arguments (many of which were indeed based on the Vedas and the Puranas, which necessitated my examining the correctness or otherwise of the historical conclusions that those AIT writers derived from the Vedas and Puranas).

Equally strange that while this man read what Witzel apparently said above, he has not read what Witzel has repeatedly said about the historical value of the data (incidentally, exactly the same data used by me in my analysis in my books) in the Rigveda and its usefulness in analyzing the history of the Vedic period:

Clearly both these fools fervently depend on their readers being even bigger fools (and ignoramuses to boot) than themselves.

5. “…instead of confronting the argument, the “Voice of India” writers — mostly amateur historians with no linguistics background — dismiss linguistic analysis as “a petty conjectural pseudo-science” and “hair-splitting”.

Koenraad Elst and I are the Voice of India writers who have written most prominently on the AIT-OIT issue. And we have dealt with the linguistic issues in ruthless detail: I have both blogs and YouTube video-talks devoted exclusively to the linguistic evidence which totally disproves the AIT and proves the OIT, and in many of my blogs I have strongly (and with detailed data and explanations) countered those kinds of Hindu writers who “dismiss linguistic analysis as ‘a petty conjectural pseudo-science’ and ‘hair-splitting’.”

But when you know that you are writing blatant lies, it is necessary to fall back on that old time-tested device of the shyster — the strawman argument.

6. “The hallmark of religious faith — and the nationalism often entwined with it — is that it is highly resistant to rational argument”.

This would be the cue for a polemical Hindu to allege that Witzel and Forrest, and other anti-OIT warriors of their ilk, are motivated by religious faith in Christianity or “Protestantism” (as some warriors from the Hindu side have narrowed it down to) — and the Colonial Imperialism often entwined with it — but this has never been an argument from my side (except in respect of actual Christian missionaries; and I know these two are not Christian missionaries, though definitely anti-Hindu bigots).

I would rather say: “The hallmark of fossilized academics — and the hate politics often entwined with it — is that it is highly resistant to rational argument”. Certainly, no AIT supporter has ever shown the guts to even pretend to try to debate the AIT-OIT issue on rational grounds with me.

The irrefutable Mitanni evidence presented by me (in the context of the clear division of the Rigveda into two distinct chronological periods which I have classified as the Old Rigveda and the New Rigveda, see my two blogs “The Chronological Gulf Between the Old Rigveda and the New Rigveda“ and “The Recorded History of the Indo-European Migrations – Part 2 of 4 – The Chronology and Geography of the Rigveda“) proves that the Mitanni people, who dominated a major part of West Asia from the sixteenth century BCE had migrated from India during the period of composition of the New Rigveda, and that the geography of the earlier Old Rigveda was to the east of the Haryana Sarasvati river in a period going back as far as at least 3000 BCE. This conclusive evidence, and any debate on it, has been very successfully stonewalled by the cowardly AIT proponents.

Fraudulent and cowardly shysters like Drew Forrest are content to spout their hate propaganda through captive media rather than indulge in honest rational debate.

Talageri, S. G., 1993b: The Aryan Invasion Theory – A Reappraisal. Aditya Prakashan, New Delhi (1993a minus 3 chapters, and with a different Foreword).

Witzel, M., 1997b: The Development of the Vedic Canon and Its Schools: The Social and Political Milieu. In “Inside the Texts, Beyond the Texts”, ed. by M. Witzel, Cambridge 1997 (Being the proceedings of the International Vedic Workshop, Harvard University, June 1989).