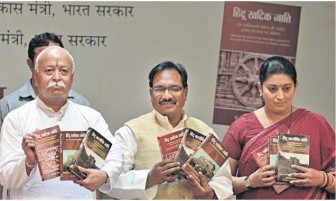 On 22 September 2014, this report from Hindustan Times speaks of the RSS’s new found agenda of absorbing Dalits into the larger Hindu fold by rewriting history. The report goes on to mention how following the triumph of the NDA in the 2014 Lok Sabha elections, the RSS has stepped up its attempts to  “validate” a unified Hindu identity by coalescing all caste groups together, breaking down all social barriers. The report admits that

‘An overarching Hindu identity beyond any castes or sub-castes is an objective that the RSS has been striving for decades, despite being projected as an upper caste outfit.’

Yet somehow the reporter finds such attempts suspicious. It is the same old problem RSS faced for most of its subsistence: damn if you do, damn if you don’t. Now let’s see some of relevant assertions made by the RSS:

shudras’ were never untouchables in Hindu scriptures. ‘Islamic atrocities’ during the medieval age resulted in the emergence of untouchables, Dalits and Indian Muslims… In pre-historic and Vedic age, Khatik castes have been recognized as Brahmins who affected sacrifices ……Three top RSS leaders have sought to attribute the genesis of Dalits, tribals and many other groups to “Muslim invasion” in medieval times.

Such statements were made by RSS leaders on the occasion of the release of three books penned by BJP spokesman Vijay Sonkar Shastri recently — “Hindu Charmakar Jati”, “Hindu Khatik Jati” and “Hindu Valmiki Jati”. Now it is undoubtedly a matter of debate when the stigma of untouchability actually crept into Hindu society, but a host of Historians like the renowned Jadunath Sarkar, GC Pandey, and even the Marxist DD Kosambi have attested that this stigma may have gained wider currency during the medieval timeline. The aforementioned historians have shown through rigorous research that social turmoil in the indigenous society was largely the outcome of the Islamic invasion.

However, I found the assertion made by some of the RSS leaders about untouchability being absent in the Vedic system of Varna tempting, since it is not just the RSS who hold such views. Sample the following:

2. In the Vedic age the Rishis did not form an exclusive caste of their own but followed different professions according to their convenience or natural tastes…

The first excerpt is from Annihilation of Caste penned by social reformer and Dalit icon Babasaheb Ambedkar, while the second excerpt is borrowed from Acharya Prafulla Chandra Ray’s voluminous A History of Hindu Chemistry. Of course there is  no doubt that this Varna system is largely pointless in the current social context. As Veer Savarkar pointed out in his ‘Essentials of Hindutva’ –

All institution is meant for the society, not the society or its ideal for an institution. The system of four varnas may disappear….….

Keeping in mind the ridiculous concepts like the Aryan Invasion Theory being taught for long as the cause for caste anomaly, one should write books on such matters only after in-depth, well-rounded research of reliable primary sources. It would have been better if the Hindustan Times writer had taken the effort to quote relevant excerpts from the books released by the RSS in order for us to know if the information provided is trustworthy or not. But he followed the age-old tradition of just casting doubt on the RSS without proper verification.