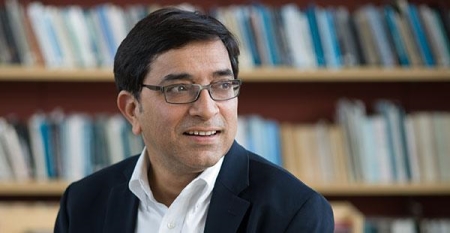 Writing in a column in the Indian Express on 14 April 2014, Brown University Professor Ashutosh Varshney claims that

If Muslims vote en bloc, there is still a chance that they can frustrate Modi’s ascent to power.

Prof Ashutosh Varshney’s dislike for the BJP’s Prime Ministerial candidate Narendra Modi is well-known. Indeed, in an earlier article on Narendra Modi, Prof Varshney had made misleading claims about the RSS and Savarkar which resulted in a factual rebuttal by RSS spokesperson Ram Madhav.

In the present column however, Prof Varshney goes a step further and actually gives an explicit suggestion to the Indian Muslim community to vote en bloc against the BJP solely in order to stop Narendra Modi from becoming the Prime Minister.

If Prof Varshney was contesting elections as a candidate or if he was canvassing for a particular political party on the ground, his aforementioned statement would be treated as a violation of the Model Code of Conduct resulting in penal action.

It is one thing to have a personal preference for or against a certain party or ideology. However, specifically calling upon a particular community to vote against Narendra Modi purely because they are Muslims falls well within the definition of communalism.

It is quite clear from the above that Prof Ashutosh Varshney is communal.