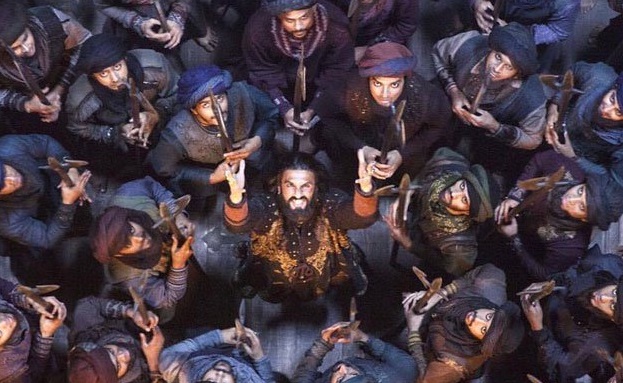 Fiction or otherwise the movie “Padmavat” quintessentially repeats what can be called as the asymmetric application of “Dharma” by Indian rulers. In one of scenes, the Mewar king Ratan Singh following his “Rajput Dharma” is seen welcoming his enemy Khilji at the cost of a missed opportunity to eliminate him and gesture that is not reciprocated by Khilji. Whether this happened in history or not is not the subject matter. However down since ages and right upto the current strategic doctrine of India, we have always applied one sided “Righteousness or Morality” in the garb of ‘Dharma’ which in fact our ancient texts have repudiated in many cases.

The most interesting part of Mahabharata which often is less stressed upon is the Anushasana Parva, an extended range of dialogues where in Bhishma gives out the most valuable wisdom to Yudhishthira from his deathbed post war. Though Bhagavad Gita overshadows most of the other ‘Gitas’ and wisdom texts in Mahabharata, this ‘Parva’ is quintessential text of “Raj Dharma” or what can be called the most ancient leadership guides. Although we will visit the key word “Dharma” later but for now its important to understand that this section of Mahabharata primarily addresses the “duties of the king”. The great knowledge spelled out by Bhishma isn’t however restricted for kings alone but is essentially a decision-making manual in different circumstances, context and situations for people at large. If studied deeply our Itihaas and Puranas are filled with leadership manuals programmed and articulated in subtle stories. One such story told by Bhishma to Yudhisthira appears in the ‘Apaddharmanusasana Parva’ which lays out the canvas for ‘decision making’ specifically during a calamity, adversarial or difficult circumstance. The story in summary relates to Vishvamitra, the great Rishi. The earth had to face the wrath of Indra and had to suffer severe famine and thus severe shortage of food. Vishvamitra and his family were severely malnourished and facing possible death due to starvation. With nothing to eat and desperate for his family’s survival Visvamitra decides to steal food from a house. He ends up in a Chandala’s house, (a person considered to be from lowest strata of the society during that time) and finds the half eaten lower part of the dog’s flesh hanging from the ceiling. When he tries to steal it, he is caught by the Chandala who then tries to convince that Vishwamitra is committing a great sin and not upholding his ‘Dharma’ by trying to

Vishvamitra then forcefully puts up a counter-argument that only if he survives he will be able to uphold ‘Dharma’. If he (Vishvamitra) doesn’t survive then everything else becomes immaterial. Vishvamitra further says “By committing this sinful act today I shall certainly save my life which is very sacred. Having saved my life, I shall afterwards practise virtue and cleanse my soul. Tell me which of these two is preferable (to die without food, or save my life by taking this food that is unclean)” (source- KM Ganguli Translation of Mahabharata)

Chandala finally relents, Vishwamitra then takes the meat to feed his family and the story goes on. However hearing this Yudhistira is shocked and stupefied and questions the justification of such an act. To which Bhishma gives a wonderful answer:

“I do not instruct thee in respect of duty, taught by what I have heard from the Vedas alone. What I have told thee is the result of wisdom and experience. This is the honey that the learned have gathered. Kings should gather wisdom from various sources. One cannot accomplish his course through the world with the aid of a morality that is one-sided. Duty must spring from the understanding; and the practices of those that are good should always be ascertained, O son of Kuru! Attend to these words of mine. Only kings that are possessed of superior intelligence can rule, expecting victory. A king should provide for the observance of morality by the aid of his understanding and guided by knowledge derived from various sources. The duties of a king can never be discharged by rules drawn from a morality that is one-sided. A weak-minded king can never display wisdom (in the discharge of his duties) in consequence of his not having drawn any wisdom from the examples before him. Righteousness sometimes takes the shape of unrighteousness. The latter also sometimes takes the shape of the former. He who does not know this, becomes confounded when confronted by an actual instance of the kind. Before the occasion comes, one should, O Bharata, comprehend the circumstances under which righteousness and its reverse become confused. Having acquired this knowledge, a wise king should, when the occasion comes, act accordingly, aided by his judgment. The acts he does at such a time are misunderstood by ordinary people…. The man of true knowledge should find out for himself the morality laid down for the good. If even a wise man speaks of morality under the influence of wrath or confusion of understanding or ignorance, his deliverances go for nothing. Discourses on morality made with the aid of an intelligence that is derived from the true letter and spirit of the scriptures, are worthy of praise and not those which are made with the help of anything else. Even the words heard from an ignorant person, if in themselves they be fraught with sense, come to be regarded as pious and wise.” (source- KM Ganguli Translation of Mahabharata)

The subtle context of this conversation and the illustration brought out by Bhishma is in relation to the concept of Dharma. Unfortunately we pride ourselves of being a Dharmic Civilization without even understanding the word “Dharma”. While Dharma is complex in definition, its important to first note that what its not and using the Upanishadic concept of “Neti Neti” (conclusion by negation theory, not-this, not-this), it’s definitely not “Religion” as the popular narrative seems to have become. The word Dharma originates from the root “Dhr” which refers to “(that which) holds or sustains (oneself)”. Bhishma rightly mentions that “Dharma” is very difficult to define

“It is most difficult to define Dharma. It has been explained to be that which helps the upliftment of living beings. Therefore, that which ensures the welfare of living beings is surely Dharma. The learned rishis have declared that which sustains is Dharma”.(Source Dharmic Education- A Panacea for Social Evils in Emerging Economies Karanam Nagaraja Rao Krishna Kishore)

The operating word is “sustenance” which often has been ignored and Dharma has been homogeneously applied across all situations and circumstances. The Indian kings and rulers especially in the medieval India applied this homogenous concept of morality and righteousness asymmetrically to the invaders and barbarians in the garb of “Dharma” and lost their very existence. Even in the current context the strategic doctrine of India has this underlying asymmetric “Dharma” in its consciousness, which is often a losing proposition when dealing with expansionist forces. We hold our morality and righteousness in the highest order and rightly so but the situational and conditional application of Dharma has to go hand in hand. The term “Apad-Dharma” (adversarial and contrarian circumstances) has increasingly become the norm of the geopolitical and chaotic world that we live in.

While the texts show that Dharma is contextual and situational it also has umpteen examples of being ‘individual’ specific in its application. Again going back to Mahabharata, the greatest Kuru Bhishma was known for his great pledge of being a bachelor and his life-long allegiance to the king of Hastinapur. His interpretation of Dharma is completely different from that of people like Arjuna. When Amba comes in and pleads to marry with Bhishma, he rejects it even though there was a known tradition of not declining any woman’s proposal was prevalent those times. Bhishma sticks to his interpretation that his pledge is supreme and upholding to it is his “Dharma”. During the exile period, Arjuna takes a vow of celibacy for some time and its during then that he meets the Naga princess Ulupi who courts and urges him to marry him. Arjuna initially rejects Ulupi but relents and breaks his vow after a convincing argument by Ulupi.

In fact Mahabharata is a Samam-Purnam of individual interpretations of Dharma. The most definite case can be made out from the killing of Kauravas, none of their great warriors were killed in a “traditional fair” manner. The same Pandavas were all too tempted to apply the homogeneous application of Dharma had it not been for Krishna who guides them to the asymmetrical action again and again.

While the interpretation and definition of Dharma can never be agreed upon but for India to mature into the world power it has to re-look at the Dharmic playbook and learn from the valuable lessons from its great texts.

The Apasatma Dharmasutra says “The Righteous ( dharma) and the Unrighteous ( adharma) do not go around saying, ‘Here we are!’ Nor do gods, Gandharvas, or ancestors declare, This is righteous and that is unrighteous.”

Here at CertificaitonKits, we have on-staff seasoned CCNA, CCNP, and CCIE instructors. These instructors have helped develop Cisco training curriculum, delivered boot camps and have authored various books you will find in Barnes & Nobel or Borders.
210-260 pdf
When you purchase a lab kit form us you will get a lab workbook to help guide you through your labs. But the lab workbook does assume that you have some basic knowledge about Cisco routers and switches.
200-125
For example, the pdf questions, debate each topic at a distance, the applicants study them dull and annoying. Similarly, the applicants provide favorite to exercise test. A practice test is communicating and stimulating as associated to pdf material.
cisco
If you want to pass your ICND1, ICND2 or CCNA exam on the first try, it is essential you have a sound, effective study plan that is proven and other Cisco CCNA students have followed to successfully pass their 200-120, 101-101, or 200-101 tests.
300-115 pdf
We are providing the helping material in two ways which are • PDF • Practice Test Software PDF Exam – the first technique expected of applicants to prepare for CCNA Routing and Switching 200-125 Cisco Certified Network Associate, are hand notes that consist of full, comprehensive information about every CCNA Routing and Switching 200-125 Cisco Certified Network Associate area.
http://www.passexamway.com/
It is written in layman’s terms for very green students and it the cheapest solution. However I have found that it does not go as in-depth to some topics as I might like.

However, most of the time many questions asked in a preceding exam are somewhat repeated either in the same formulation or paraphrased.
200-125 exam
So if you are already familiar with Cisco routers and TCP/IP, this may be a better solution for you. Finally, we recommend the Bryant Advantage Ultimate CCNA Study Package.
210-260 iins
The preparation of CCNA Routing and Switching exam, you can do with our preparation material.
300-115
Just focus on over study material for the preparation of CCNA Routing and Switching 200-125 Cisco Certified Network Associate.
cisco
When you purchase a lab kit form us you will get a lab workbook to help guide you through your labs. But the lab workbook does assume that you have some basic knowledge about Cisco routers and switches.
http://www.itcert-online.com/
In preparation of our CCNA exam, we want to make sure we cover the various concepts that we could see on our Cisco CCNA exam. So to assist you, below we will discuss preparing for the CCNA exam.