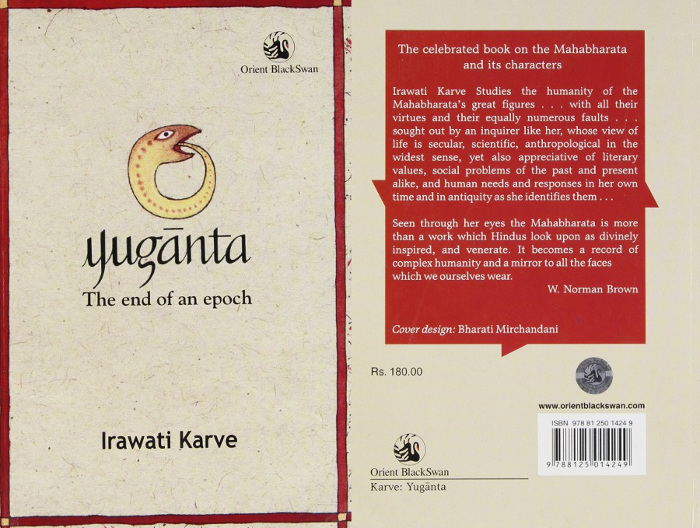 Yuganta by Iravati Karve can be purchased from Amazon

One must set aside any kind of judgmental attitude. As the Mahabharata says, there are neither perfectly good, nor perfectly bad people. Viewing it as we do based on narratives set by films and TV series, we however tend to align Pandavas with heroism, courage, truth, benevolence and other such virtues. On the other hand Kauravas and all their associates are considered greedy, lecherous, plotting and scheming bigots, who should be abhorred under all circumstances.

Somehow with Mahabharata this doesn’t seem to be the case. Every character has his or her own shades of grey. “Yuganta” by Iravati Karve tells us to first accept this fact. They should be studied to learn from their life and times, without judging them for their actions. This is not a story book, but rather a collection of essays which analyse various characters of Mahabharata and their roles. Through these characters, the author tries to imagine ‘what might have been’ the actual scenario.

Yuganta essentially tries to read Mahabharata between the lines. Out of the ten chapters that comprise this book, the initial ones contrast Gandhari and Kunti. While Gandhari is the mother of those who lost the war, and sons of Kunti were the ones winning it, both characters have more or less faced the same amount of adversities in their lifetimes. Both responded to their respective situations in a different manner. Outcomes were different, and readers will start wondering what other choices were available to them.

There is one chapter dedicated to the patriarch Bhishma. All his life he sought to keep an heir on the Kuru throne. Even though the kings he made were rarely worthy of the throne, he himself selflessly maintained law and order across the kingdom. Or so it seems. What was his real motive asks this chapter. He persistently tried to stop the war even during his last days, even on his death bed. But was it a selfless motive or the greed of remaining the supreme authority, the king maker, even without sitting on the throne. Was it something like enjoying the without having to shoulder the responsibilities?

In recent times we have seen many authors exploring in depth the character of Draupadi, mostly from a western feminist point of view. We have here a chapter dedicated to Draupadi. We see how she may have managed between her five husbands. Questions that were never asked, are raised. How were her relations with Bhima, Arjuna or Yudhishthira as individuals? Did she love Arjuna more, or did Bhima adore her? Was she as knowledgeable as Yudhhisthira and perhaps his competitor in intellectual terms? This chapter explores the relation between being in love and being ever compassionate. What might be the effect of such choices?

In the introduction the book, the author raises doubt on the division of Mahabharata into Parvas. Whether this classification was present at the beginning or was it a work of later scholars is asked. The author goes on to explain her reason doubt being the consideration of eighteen as a sacred number. A later chapter raises the question of caste and class conflict through the story of Drona and Ashvatthama. Both were born Brahman and took up the role of Kshatriyas. The question raised here is did “par dharmo bhayawah” mean that taking up someone else duties would cause miseries? Did picking up someone else role cause troubles for the father-son duo. Does Mahabharata emphasize class-divides through such narratives? But these questions are for the reader to ponder upon.

Krishna is the most famous character or Mahabharata undoubtedly, although he enters into the epic at a later stage. Whether he was a human being or a god is a question of much debate. The chapter on Krishna details his friendship with Arjuna instead. How he was related to the Yadava clan? Did relations with the Kuru clan forge this friendship? The emotional aspects of the kinship which are seldom touched in discussions on Krishna find a place in this chapter. It makes the reader treat the godlike character of Krishna with more humane compassion.

Assimilating miracles, by presenting them in a form acceptable to readers of today is not new. The chapter on Vidur, thus asks if he might have been the father of Yudhishthir. As with other chapters this too makes the reader uncomfortable with the idea of what if this would have been the case? Iravati Karve had been a student of sociology and anthropology. Her book does not treat the characters of Mahabharata as titans, but rather as ordinary human beings with complex human characteristics and emotions.

The author insists that in order to counter her line of thought and refute her arguments, if one were to read the original Mahabharata, one of her purpose of writing these essays would be complete. She has been quite successful at this task. Yuganta by Irawati Karve raises interest in reading the original epic in full.