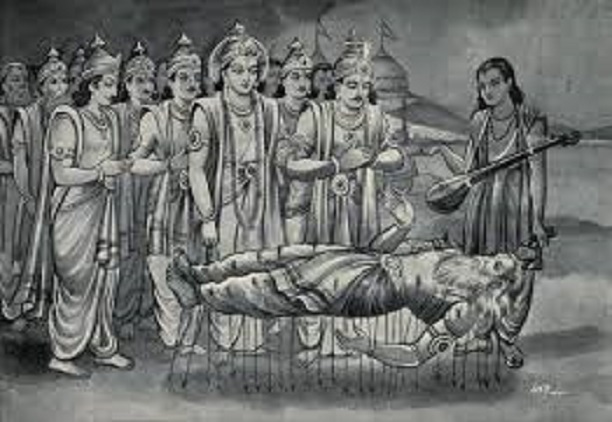 In the Indian calendar, February 4 2017 happens to be a Shukla Paksha Ashtami, the 8th
Day in the brighter half of the lunar month. It is mentioned in the Mahabharata that one of the
the most revered persons, Pitamah Bhishma who was always clad in silvery white clothes,
chose to leave his body on this very day. In many parts of the country, people perform Tarpan with kusha grass, sesame seeds and water in his memory. On this significant day, it would be appropriate to know the story of Bhishma and how he shaped the narrative of the Mahabharata. In times when Kingship was looked at as the rightful inheritance by a son who qualifies in every respect, Bhishma, in his prime of youth gave that up without a second thought and even vowed to remain unmarried. That shows his magnanimity, tyaga bhava and why he shines as the most revered character in the Mahabharata.

King Shantanu of the Kuru lineage who was the son of Pratipa was wandering in the forest. His eyes fell upon a beautiful woman. Instantly attracted by her beauty and radiance, Shantanu enquired her origin and expressed his desire to marry her. The beautiful damsel reveals that she is Ganga and agreed to marry the king but placed a condition before him. She said that after their marriage, the king should neither interfere nor question any of her actions. Intoxicated by her beauty, Shantanu agreed to the condition. They led a virtuous life in the palace. After many years, the queen Ganga who was a beauty in form and character gave birth to a child and let it go in the river. Remembering his agreement, Shantanu did not  interfere with her actions. She let go of seven such children and when she was about put the eighth child into the river, Shantanu unable to bear the pain and rage questioned her action.
Sad that he had broken the promise, the queen revealed that she was the River Goddess Ganga and that she would have to leave the King and take the child with her. She went on to explain the real reason for her actions. It so happened that on a certain day, the eight Vasus who were celestial beings had come down to earth. They happened to see the divine cow Kamadhenu in Sage Vashistha’s ashram. One of the Vasu Dyu’s wife expressed that she would like to gift the cow to her friend. Unable to refuse her request, the vasu stole Kamadhenu. Upon knowing this, Sage Vashistha cursed the Vasus to be born on earth and that the vasu Dyu will lead a long life of on earth. Ganga mentioned that the Vasus had taken her help to be born on earth and that she had to keep their birth and liberation a secret. The eighth child was destined to be on earth and he was named Devavratta whom we know as Bhishma.

After Ganga had departed, Shantanu was deeply saddened. On one of his other expeditions, he was attracted by the fragrance of a woman. He came to know that she was the daughter of a fisherman. When he expressed his desire to marry her, the fisherman placed a condition that the child born to them should be crowned the next king. Unable to make such a promise, he returned to the palace discouraged. Looking at the King’s sorrow, Bhishma took it upon himself to meet and convince the fisherman. He promised the fisherman that he would never marry and that the child born to the fisherman’s daughter shall become the king.

It was unthinkable that someone born in the royal family and who was next in line would take such a strong oath. This beautiful yet terrible oath earned him the name Bhishma. The oath is terrible because a prince vowing to remain unmarried will mean that the royal lineage stops with him. Giving up the kingship made the oath all the more terrible. This oath also earned him a boon from his father who said “Death shall never come to thee as long as thou desirest to live. Truly death shall approach thee, O sinless one, having first obtained thy command.”.

While Bhishma’s oath gained him a boon of choosing his time of death, there was a woman’s oath that caused his death. Amba along with her two sisters, the princesses of Kashi, were carried away in a chariot by Bhishma to get them married to his brother Vichitravirya. Amba who was already in love with King Salva, expressed her anger and demanded that she be let go. Refused to be accepted by Salva, then by Vichitravirya and also by Bhishma, Amba took a terrible oath to defeat Bhishma. Unable to accomplish this in her present lifetime, she was reborn as Shikandin, the daughter of Drupada, who later became a man through a yaksha’s exchange of gender.

Those who read the abridged version of the Mahabharata often miss the significant role that Bhishma played in the welfare of Hastinapura. Hastinapura was always going through turbulent times, either because of untimely death of Kings or weak lineage or a blind king’s rule. Bhishma who was in Hastinapura across generations was the pillar who protected and stabilized the throne. He was instrumental in identifying the right Gurus Dronacharya and Kripacharya for the Kuru princes. He identified appropriate wives for Dhritarashtra, Vidura and Pandu. Throughout the Mahabharata, one can see that Bhishma always shared his wisdom to bring stability in the kingdom. He actively participated in war to protect the Kingdom and always advised them on proper niti to be adopted at all times to maintain the prosperity of the Kurus. One often has the question: Could Bhishma have stopped the Mahabharata war from happening?

Vyasa Maharishi narrates that Bhishma had tried on many occasions to stop the war but the words of Duryodhana were so strong and Dhritarashtra was so blind to his son’s attitude that Bhishma could not do much. Though he knew very well that a war would be disastrous, having been with the Kurus for so many generations, he decided to stay on the side of the Kauravas to fight the war.

The Kurukshetra war started on the Shukla Paksha Ekadasi of Margashirsha month. This is also the day when the Bhagavad Gita was delivered and observed as Mokshada Ekadasi. The war had started and it was the ninth day and both the sides were creating severe damages. Bhishma as a commander in chief seemed invincible. It is mentioned that in the war, Bhishma single handedly destroyed 1.27 Akshauhinis. On the ninth night the Pandavas and Shri Krishna approach Bhishma and they ask Bhishma the means to kill him. Bhishma reveals that he would never fight a woman or a woman who has become a man. The next day, the Pandavas place Shikandin in front of Arjuna and shower arrows on him. Bhishma refused to retort as he could not fight Shikandin who was born a woman.

When Bhishma fell on the ground, the entire place came to a stand still and vaidyas rushed to provide medical aid. Even at the moment, Bhishma made one last appeal to Duryodhana to give up war and make peace with the Pandavas but he refused. He even requests Karna to fight on the side
of the Pandavas as Dharma was on their side. He too refused. As suggested by the Rishis, Bhishma lay on a bed of arrows waiting for an appropriate Muhurtha to leave his body.

The depth of Bhishma’s understanding of life, governance and liberation are beautifully presented in the Shanti Parva which is the longest chapter in the Mahabharata. After the war is over, Yudhishthira is dejected and wants to renounces his position as King. Shri Krishna takes him to Bhishma who is lying on the bed of arrows for the transfer of knowledge of  Purusharthas (Dharma, Artha, Kama, Moksha) from Bhishma to Yudhisthira. Shri Krishna expresses that with the passing away of Bhishma, all the wonderful knowledge will vanish with him and hence it was important to imbibe them from him. When Yudhisthira and Krishna meet Bhishma, he mentions that he is weak after having fought the war and is in tremendous pain. Also, he questions that in the presence of the all-knowing divine Krishna of what value could his meagre knowledge be. Krishna affirms that Bhishma is the foremost of the Kurus and blesses him that he would not experience the pain from the wounds caused by the arrows. Krishna adds that Bhishma sharing the knowledge himself will establish him as one of the wisest beings in the collective memory of future generations.

No wonder even now we remember Bhishma’s life, message and liberation from the earth with great reverence. Bhishma niti is still considered to be one of the foremost reference texts expounding the principles of Dharmic living and conduct. The word Pitamaha (the Grandfather) immediately invokes the remembrance of Bhishma in the minds of Bharat vasis. Dharmo Rakshati Rakshitaha (Dharma protects the one who protects Dharma).