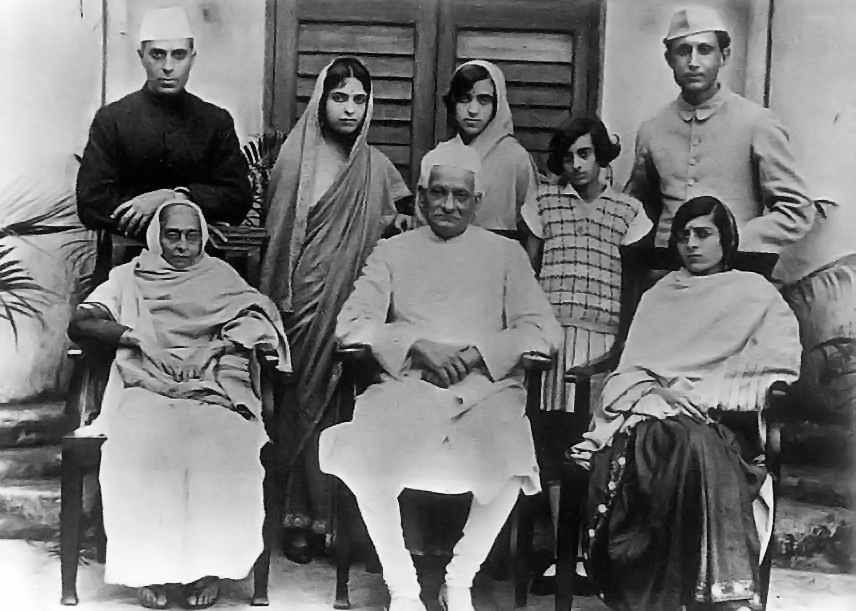 The Congress has always been a party held together by a personality—first by Mohandas Gandhi, later Nehru, and now Sonia Gandhi. It is inevitable therefore that force of personality rather than concerns of national interest should have influenced major decisions even at crucial points in India’s history. This was so in Kashmir, in Tibet, over the border dispute with China, the Shimla Agreement, and most recently, the misadventure in Sri Lanka.

It is India’s misfortune that this personality-dominated entity should have controlled the fate of the nation for the better part of half a century since independence. The question for the future is—will history repeat itself or have the people of India learnt their lesson?

The Congress apparently has not. This is clear from its behavior preceding the brief war with Pakistan over Kargil, when Sonia Gandhi tried to take over the Government in a coup under false pretenses. This was also very clear in the manner in which the Sonia Gandhi remote-controlled UPA government rode roughshod over India for two consecutive terms. It is further clear that with a paltry 44 Lok Sabha seats, the Congress still tries to pretend it is relevant in Indian politics and indulges in a daily exercise of sabotaging and preventing India’s progress.

It is unnecessary to go into the details here, but a basic question needs to be asked in the context of the Kargil war. At the very least, the episode involving the infamous tea party and the coup attempt showed that there are people at the highest level who have no conception of national security. Anyone who indulges in such a reckless adventure, treating the nation and its interests in such a lighthearted manner is unfit for high office.

This is what India escaped in April 1999—no thanks to the Congress party.

Nehru may no longer be on the scene but his legacy of sacrificing national interest for personal gain—or what N.R. Waradpande in his book on Nehru has called ‘assault on nationhood’—continued unabated especially in the 2004-2014 decade.

By no stretch of imagination can the dynasty or its party be called nationalistic. The behavior of the Congress party in mindlessly supporting Sonia Gandhi at the cost of national interest shows both Nehru and his party in their true colors.

A hugely significant point which is conveniently overlooked in public discourse is the fact that some documents in the National Archives are not available to scholars if the Nehru family members feel that they might contain any damaging information.

But the Congress, joined by the Communists, went much further, especially when Indira Gandhi became Prime Minister. Just as Nehru sought control of the “commanding heights of the economy” with his socialistic planning, he and his successors built a centralized educational establishment that would perpetuate his anti-Hindu view of Indian history and civilization. This led to anti-Hindu forces dominating education for more than fifty years.

The first minister of education was Maulana Azad—said to be a ‘nationalist’ Muslim and a close friend and open admirer of Nehru—at least in public.

Azad was an indolent man and an ineffective administrator, but with a strong commitment to exalting the glory of Islamic rule in India. He had a hand in sabotaging R.C. Majumdar’s multi-volume work on the Indian Freedom Movement, which at times was critical of the Congress.

So the official rewriting of Indian history had begun—with its whitewashing of the horrors of Islamic rule accompanied by the introduction of anti-Hindu propaganda—describing Hinduism as full of inequities and Islam as egalitarian. Nehru himself had set the trend with his glorification of Muhammad of Ghazni and Babar.

Under this programme of de-Hinduisation, vandals and terrorists like Ghazni, Babar and Aurangazeb were treated as bringers of civilization and equality, while portraying such freedom fighters as Shivaji, Rana Pratap, Chandrashekar Azad and others as obstructionists standing in the way of progress.

But thanks to the official hospitality extended to such historical revisions, the influential National Council for Educational Research and Training (NCERT) came to be dominated by scholars who pursued the Nehruvian agenda or were willing to cater to it.

The same was true of another influential educational body — National Institute for Educational Planning and Administration (NIEPA). Independent-minded historians and other scholars who were not prepared to toe this official line were removed or made ineffective.

A fateful event that played into the hands of the Secularists was the appointment of Nurul Hassan as education minister in the Indira Gandhi regime. He claimed to be a Marxist, but he pursued an anti-Hindu agenda like a Muslim Fundamentalist. After the creation of Pakistan, many Muslim Fundamentalists pretended to be Marxists, and kept attacking Hinduism for its ‘inequality’.

As a result, anti-Hinduism acquired a stranglehold on education. NIEPA is a particularly influential body that administers and oversees educational policy in India. NCERT controls textbooks and other materials that are used in schools and colleges in India. Both were now under the firm control of anti-Hindu forces.

Through his control of these two powerful bodies, Nurul Hassan became education Czar in India. He extended patronage to the Marxist-dominated Jawaharlal Nehru University and the Muslim separatist Aligarh Muslim University. They were allowed to provide consultants and experts on all educational matters. As a result, these two academically undistinguished but politically opportunistic universities have come to command resources and influence disproportionate to their merit.

A single example should help give an idea of the dangers of this centralized feudal educational policy. For over 20 years, H.S. Khan headed the history and sociology division of the NCERT. He was known to hold the view that India became civilized only through the introduction of Islam. This incidentally is also the official Pakistani line. This was also the view of Nurul Hassan who was of course the patron of H.S. Khan.

In 1986, on Khan’s initiative, textbook writers in all the states were directed to change the version of history to accord with the anti-Hindu model. Specific guidelines were issued to all the states instructing them not to glorify any period of history—meaning any Hindu period—as a Golden Age.The Gupta period therefore was not to be glorified despite its great achievements.

As a further step in de-Hinduisation and rehabilitation of tyrannical Muslim rulers, Hindu leaders like Shivaji, Chandrashekara Azad and Rana Pratap were not to be described as freedom fighters against alien rule, but treated as terrorists who opposed ‘civilized and civilizing’ rulers like Aurangazeb.

As a result, the anti-Hindu agenda, which had been gaining strength since the early 1950s, accelerated dramatically under the feudal regime of Nurul Hassan.

However, following the rout of the Congress party in the 1999 and2014 elections, their monopoly has come under threat. This has made these men and women resort to desperate measures like what is coming out in the ICHR scandals, a scholarly precursor to which can be found in Arun Shourie’sEminent Historians.§

What should be done?

From all this two points become clear.

First, the history being taught in Indian schools and colleges was created by colonial masters and their willing servants to serve anti-national interests and damage India’s heritage and culture.

Second, institutions created to serve national educational goals were dominated by self-serving individuals hostile to national aspirations. The result is that institutions like the ICHR fell into the hands of mediocre scholars with political influence. They have contributed little of significance because of their worship of the West and their inferiority complex. They have built no Indian schools of thought, especially in history.

Sri Aurobindo had foreseen this long ago when he wrote:

[That] Indian scholars have not been able to form themselves into a great and independent school of learning is due to two causes: the miserable scantiness of the mastery of Sanskrit provided by our universities, crippling to all but born scholars, and our lack of sturdy independence which makes us over-ready to defer to European [and Western] authority.

There is another problem. In the fifty years after independence, the Government and its agencies like the ICHR, NCERT and NIEPA have supported only such scholars who are weak in scholarship and afraid of thinking independently, but willing to toe the official line. They are products of the Macaulayite education system, which was created to produce colonial servants and not independent thinkers.

When we look at scholars doing independent work like Natwar Jha, David Frawley, R.C. Majumdar, Shriakant Talageri, Michel Danino, Sita Ram Goel and others, none of them has received support from the Government.

This shows that the Government has been supporting political favorites rather than capable scholars. When we look at Government sponsored scholars the picture is even more dismal. The only time anyone hears about them is when there is a scandal or a political dispute like the ICHR scandal. They have no important contributions that can be compared to, say, the work on the Saraswati River. They are political hangers-on rather than historians. They are able to get away with it because of their monopolistic hold over the establishment.

It is clear that a self-respecting nation like India cannot allow this disgraceful state of affairs to continue. India cannot have its children’s education controlled by men and women with slavish minds and a hostile attitude towards the nation and its heritage.

The first step is to break the monopoly of these people, which has already begun to happen to some extent. But this is only because there is a Government in power that is more nationalistic in orientation than previous Governments. A more permanent solution should be found so that history and education are not subject to the whims of politicians and special interests.

So both the causes and the consequences of this domination by anti-national interests are clear. The question now is how to remedy the situation?

The first step would be to rewrite history books based on the latest findings and the primary sources. But this is not enough, for history can change as more discoveries are made.

To ensure a free-spirited inquiry and unfettered research, there should be no Government organizations that tell educators and scholars how to write and teach history. This means disbanding organizations like NIEPA and NCERT. They have become little more than centers for thought control and political propaganda.

The ICHR should be reorganized strictly as a funding agency that invites and funds proposals. For any major research program, several scholars and/or groups of scholars should be funded so that independent schools of thoughts can flourish. It should never be allowed to become the monopoly of a single ideological advocacy group as happened under the protracted Congress regimes.

But ultimately, the nation’s education system should be changed to encourage to independent and critical thinking. No subject or personality should be placed beyond review and criticism. As Karl Popper once observed: “If our civilization is to survive, we must break with the habit of deference to great men. Great men make great mistakes.”

This means that no one — be he Mahatma, Prophet or anything else — can be put beyond the pale of review and criticism.

Popper of course was speaking in the context of the Western Civilization. Indian sages have also expressed similar views. In his Vishnu-tattva-vinirnaya, Sri Madhvacharya said:

Never accept as authority the word of any human. Humans are subject to error and deception. One deludes oneself in believing that there was a man who was free of error and beyond deception, and he alone was the author of any text.

And as Bhagavan Buddha said: “Accept nothing on my authority. Think, and be a lamp unto thyself.”