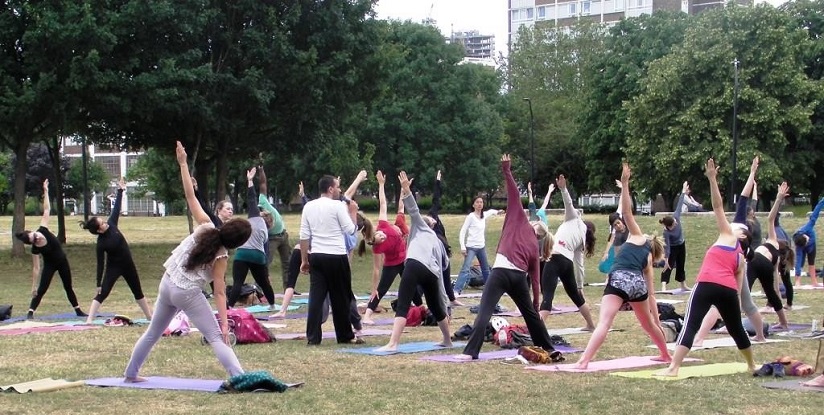 One just can’t make this up! If money–grubbing rip-off merchants like the trendy lowlives in Europe and the USA who make a fortune out of Yoga or even a cool hippie or Hilary Clinton were to run a Yoga Session, the illiterati at the BBC, Guardian or the Independent would be applauding it as “environmentally green, health conscious and the epitome of cool”. One only has to search “Yoga” on the Guardian’s website to learn that.

But when the elected government of one of the very few millennia–old surviving indigenous cultures and nation in the world gets its day in the sun to celebrate something that all humanity can derive benefit from, the illiberal liberals get apoplectic while they stress out over Yoga. Funny how, these days, they even beat the rival camps of proselytisers to either decry everything Indian as the very work of the devil or purloin it for the “civilized world” and package it as a gift of the master race which the natives would otherwise so presumptuously celebrate as their own. The Master Race just can’t have that.

In the British press, the build up to International Yoga Day began weeks before the main event.  The Guardian, with its Hindu hating Jason Burke (at one time he described the Iraq invasion as “entirely justifiable from a humanitarian perspective”) was quick off the mark using all the wiles of the plagiaristic 14–year old which seem to be the hallmark of the foreign news hack: name dropping, a sprinkling of unheard of, but dangerous non-entities like Owaisi thus creating a vacuous veneer of “research” and “respectability” best described as pretend-journalism.

The Independent went even better. The masters who snivel like dithering cowards in the face of shades of murderous monotheisms, sometimes “explaining”, making excuses for or completely sidestepping matters such as vote rigging, child sexual grooming, school takeovers, radicalization, gender segregation at political rallies, or women running off to be brides of war, feel compelled to lecture Hindus and India through editorials. The “Indi” could not have done better than to play to their gallery of pseudo-liberals since it chose IYD for its sanctimonious rant. Why, even if Mr Modi walked on water and found the answer to green energy and solved world hunger, this gang would gripe, being morbidly fixated about “Hindu fundamentalism” and the “pogrom of 2002.”

Not to be outdone, the BBC pulled out their trump cards. What better than to have a couple of natives do the “heavy lifting” of Macaulay‘s unfinished civilizing burden?

Drum roll for Naga Munchetty please! To celebrate IYD, the BBC commissioned a 30 minute TV show titled “Bend it like Britain”. What is it with some people of Indian descent in the media? They seem to lack any knowledge or empathy for the culture and traditions of their ancestors. Naga did not disappoint as the golf–addict girl from Streatham proudly showed off not just her ignorance of but her unwillingness to “connect” with the subject of Yoga, paying too much attention to the trendies paying a fortune to “do Yoga” with some hyperbolic marketers who made out the ancient, 3000 year–old Yoga to be something that they had “invented as some new whizz” hanging out at a fancy tower block in the City of London. Thankfully, the show was rescued by some authentic people who showed the deep connection between Yoga and Sanatana Dharma.

Despite Naga’s mild contribution to the liberally illiberal cause of India and Hindu bashing, the good old Beeb, in keeping with their penchant to REALLY rub the noses of the heathen, pulled the ace from their pack on Radio. Not just any programme, mind you:  the devoutly serious “Sunday” programme hosted by the equally devout, catholic educated and scholar, Edward Stourton.

For those who may not know, “Sunday” is a SERIOUS programme, being the flagship for religious broadcasting on BBC National Radio looking at current ethical and religious issues. On Sunday, 17 June, the topics covered included “altruistic evil”(yes, this is a serious matter!), the Charleston shootings, Pope Francis and the Turin Shroud, together with initiatives by some UK Muslim organizations to counter religious radicalisation and the threats from both non-violent and violent extremism.

Being subjects of gravitas, the programme sympathetically analysed and presented positive stories about Christianity and Islam.

The shroud is an “icon.” How does its value diminish/remain in the modern age, its association with the historical Jesus, to understand the real Jesus, read the Bible.

Being British and Muslim is “un-contentiously normal”; “true meaning of jihad…. in a spiritual context”; Involvement and engagement … Girl Guides/Brownies;  the UK Department of Education’s roll out of statutory duties of schools in safeguarding against radicalisation.

Sandwiched between these two items which were each over five minutes long, was the item about International Yoga Day.  Let’s follow the BBC’s take on an event that millions around the world were celebrating that very morning and which many millions more use as a regular form of spiritual and physical relaxation from life’s travails.

Listen for yourselves from 16:56 min.

17:08 to 17:38 min – a brief snippet of a couple of local Kolkata residents talking about Yoga, its identity with India; its health and cultural significance.

17:38 to 17:52: Stourton wastes no time in raising the bogey of Yoga “causing concern among Muslims”, and brings in Rahul Tandon, BBC’s very own “British brown sahib” lackey now residing in India, and cuts to the chase asking “Rahul, what is Mr Modi’s political agenda?”

What follows can most politely be described as a condescending two minute drain-take of all things Hindu and India.Why? Because it has little to do with Yoga and mostly to do with the BBC’s obsessions: Finding something to beat Hindus and India with, and combine it with a story line that has caused “offense to Muslims and some Christians”, and hey presto, you get a really heady brew.

Tandon jokingly starts by suggesting to Stourton that “I don’t know if you have done your stretches this morning”.  Tandon then proceeds to paint the ignorant nonsense conflating Surya Namaskar with praying to “the old Sun God” and how this was offensive to Muslims and that even Christians were offended because IYD falls on a Sunday.

Take a bow Tandon!  You win the prize for making the most effective contribution to insulting your ancestors’ culture over Yoga on IYD. Your ancestors would be proud of you.

As doyens of the “new Europe”, the BBC and its sisters in crime display the classical neo-colonial attitudes of the old Europe, seeing themselves as adjudicators for the world, even when they are blatantly wrong. They belie their “liberal” claims in that they toe the line by being meek in the face of aggressive and murderous ideologues but yet are happy to mock and take shots at the traditions and culture of a billion souls is because they think that these heathens both in India and elsewhere are unlikely to bite or scratch.

Why do they persist so?

Could it be that these illiberal liberals are offended by their lurid imaginations wherein they wish to but will never see millions of “minority” Indians seeking refuge sailing in rickety boats across stormy seas to escape from Mr Modi and Hindus who are allegedly forcing Yoga upon them in violation of their rights to worship the “one true god” so long as it is not Tandon’s “old Sun god” or some other Hindu one?

Might it be that these illiberal liberals are bending over backwards so much as to cause themselves to be so offended? Surely, this is not a Yogic posture!

Might they snap out of their stupor if they were to experience a Yoga “terror” attack?

Perhaps all illiberal liberals need to release their stresses by getting on the mat and doing some meditative Yoga?