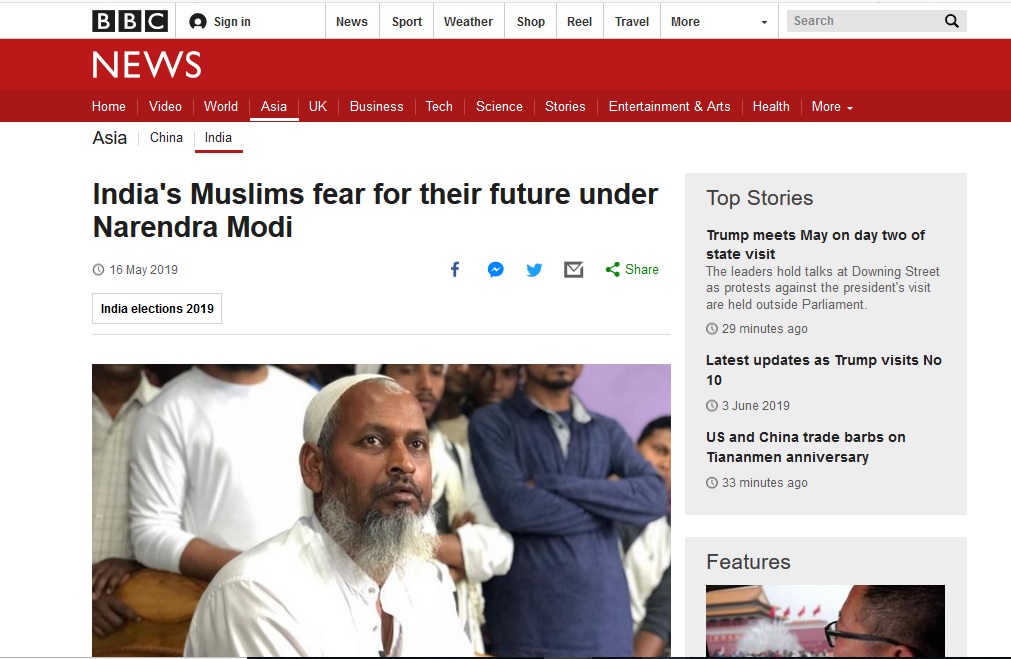 Once they used to say, “, Look! What wonderful things the Mughals and the British have done for us!”

Now they ask, “What will the Saffron hordes do to us?” In the “us”, they presume to speak for the underprivileged masses about whose lives they know little and for whom they care even less.

Oh, the intolerance! Wall-to-wall coverage on the goggle-box. Well-heeled desperados, waxing vacuously, away from the heat and dust, safe in airconditioned studios; grim faced, the lot of them; a puffy eyed, sleepless nightmare unfolding before them, but noses firmly turned up as if swamped in a stench of death.

The “saffron” ticker keeps going up by the minute.

The “secular” ticker remains firmly stuck in no-man’s land, swallowing the once-famous, but now the victims of intolerance into the political quicksand – not even the dynasty legacy in Amethi is spared.

How SO very undemocratic.

Oh, the intolerance! The wailing, the chest beating. The desperate, futile wriggle-room calculations of hope against hope continue with each saffron tick. An unspoken yet palpable angst cuts the air.

We did everything to defeat the saffron evil. Five years of scheming and planning vaporised in a flash.

What went wrong? Who’s to blame? The rickshaw driver, the farmhand, the vegetable woman, the sweeper? The house maid? The chai-wallah?

How very dare these subalterns cast their vote for intolerance? A “social activist master of psephology” is driven to a public meltdown, “I would like to hold them by their collar, and say, ‘you idiots’”.

How have these “do cowrie ke neech log” stooped even lower? See! We knew that a measly bank account and a gas cylinder would be the death of civilisation as we designed it.

We were right. Democracy is wasted on these ungratefuls. Democracy is in danger: in fact, it is “a mockery of what democracy should be”.

How very dare the unwashed, unlettered, uncouth masses destroy the “Idea of India”, an idea that, we, the privileged English educated were bequeathed by our white masters and which we gave birth to in 1947 and which has nourished socialist secularism for 70 years? What a mockery and how utterly ungrateful.

Is this what Aazadi was about?

Have all the sacrifices that Chacha and his dynasty made been reduced to this?

Oh, the intolerance! The soul of India is lost to darkness. The inheritors of power will not say it, but in their hallucinating minds, a saffron Kristallnacht is coming, to be followed by gas chambers – after all, the white 21st century post-colonial colonials have declared it.

Oh, the intolerance! Who would dare outlaw triple talaaq and empower the Muslim woman? That is SO misogynistic. – why, the Guardian knows all about Hindutva misogyny and informs the world that it is so.

Oh, the intolerance! Decriminalising Victorian prejudice against LGBT? Must be an “upper-caste” ruse surely, and SO very Brahamnically patriarchal – goes without saying.

Oh, the intolerance! “high-caste” chowkidar-divider-in-chief hogs the airwaves with Mann ki Baat, bypassing the “Lootyen” gang – that IS how Fascism started – doesn’t everyone know?

Oh, the intolerance! Clean the Ganga? You gotta be joking, right? Oh, Jesus have mercy on the oppressed “minority”, spare them from unbearable poverty and save their cowhide tanneries from economic meltdown. See, that WAS the justification for partition in the first place. Besides, the unholy river is filthy anyway; the Indoo dumps half-burnt carcasses in it, at least those that are not eaten by his weird godmen. Damn these goddamn Indoo godmen, all saffron, even when they roam stark naked. – CNN said so.

Oh, the intolerance! Bharat Mata ki Jai? – My oh my, have you ever heard such rabid Communal Hindu Nationalism? SO hateful and hurtful it must be to “low-castes” and how insecure and second-class the oppressed “minority” must feel. Short of actually laying on a flotilla of rescue ships, this is what BBC intelligence says.

Oh, the intolerance! Public highways are pathways to inclusive development, or so the economists would say. Sure enough, ‘tis true everywhere, especially for a “Red” Belt and Road – but not the “Saffron” majoritarian, anti-minority, oppressive, high-caste, intolerant communal, fascist, capitalist road. That is the road to nowhere, except …. intolerance.

Oh, the intolerance! Where dissenting voices are so silenced by the totalitarian tea-seller that a desperate Distortian is forced to whimper from the safety of the NYT, “They peddle myths and call it history”. The last gasp twitch of dinosaurs who, by the paucity of ideas and knowledge generated in six decades of distortion, have given fresh meaning to the zero. A dying species that clings on zombie-like; whose time is up; one which history will deal with as unsparingly as they have run roughshod in their craven, distorted whitewash of history.

Oh, the intolerance! How very dare that the Indoo “believe” that Ram actually existed and was born anywhere? Don’t they know that Ayodhya is holy for Muslims? – even the NYT tell us this.

Oh, the intolerance! Beef is food for the oppressed and the poor; it is the “minority’s” livelihood. So, listen up, Hindutva bigots: personal health and a strong economy depend on a ready supply of beef. Only outside India, beyond where the Indoo lives, it cow meat a proven pollutant, a risk to health, and a blot on the carbon footprint.

It does not stop there. There’s more…

Why allow objectivity to come in the way when one has colonialist superiority and prejudice for the pagan to fall back upon?

It is perfectly fine for irrelevant white nobodies to lecture hundreds of millions of Indian subalterns that they have voted for what said white nobodies and their dying-to-be-somebody brown sepoys consider “flagrant social dominance of upper castes Hindu(s), pro-corporate economic growth, cultural conservatism, intensified misogyny, and a firm grip on the instruments of state power”,… and where “India’s soul (is) lost to a dark politics…”.

Where the big lie of 2002 remains a trope, the beastly people with a beastly religion are fair game and anything is possible.

It is easy peasy. In fact, for the liberal racist, it is as easy as “Eeni Meeny Miny Modi” to paint India’s “soul lost in darkness”. You see, liberal racism IS liberal; in its jaundiced eye, all are equal. But not the ungodly Indoo for he is not human.

Oh, the intolerance! The nasty natives, like the worms that they are, have turned; democracy is wasted on these beastly darkies who have made a mockery of it, so ungrateful that they don’t know what is good for them.

So, someone, quick! Hire a flotilla for the literally hundreds of malcontents, who feel SO insecure that it is beyond their tolerance.

Get ‘em outta there.

Note: Please note that this article is intended to be satirical.