Behind the mask of the three hundred Ramayanas 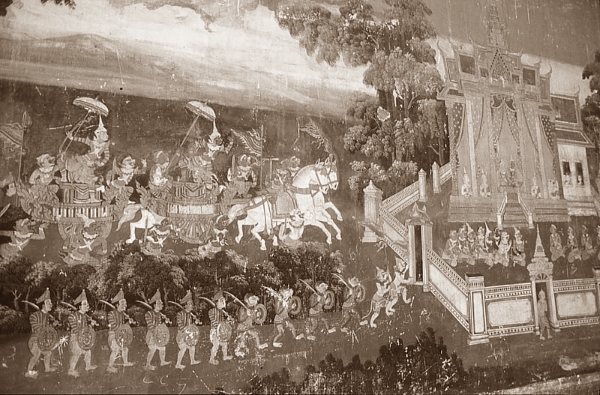 Note: This is a translation of a November 2011 article by Shatavadhani Dr. R Ganesh in Kannada Prabha. Translation by Sandeep Balakrishna.

There has been widespread and intense debate over A.K. Ramanujan’s essay titled 300 Ramayanas in the media. These debates are nothing new for Ramayana scholars. The Shatakotipravistara—that is, the long, uncountable list of various Ramayanas have been subject to extensive discussions and debates in our Itihasas and Puranas over thousands of years.

However, what was indisputably upheld was the fact that all Indian traditions traced their Ramayana retelling, studies, interpretations, and scholarship to Valmiki, and not to any other source.

There is also the argument that Bauddha and Jaina Ramayanas are different and in some cases, older. However, this argument is irrelevant. It has been established that the Tripithakas in their current form were compiled during the third Sangeeti organized by Kanishka in the 1st century C.E. Equally, scholars also agree that the Jataka tales, which are not part of the Tripithakas were composed even later than Kanishka’s period.

If one claims that the Dasharatha Jataka (which is one of the tales found in the aforementioned Jataka tales)forms the basis of Valmiki Ramayana, it is the equivalent of saying that Einstein’s research forms the basis of Newton’s research. The pioneer of the Jain Ramayana, Vimalasuri lived in the 3rd Century C.E. Therefore, if his Ramayana becomes the primary source for Valmiki, then it stands to reason that Kalidasa came much earlier than Valmiki.

And now, if we examine the other claim that regional-language Ramayanas (both oral and written tellings) formed the inspiration for Valmiki, we find that none of these tellings have an antiquity prior to the 8th—9th Century C.E. What’s more, when we examine only the oral tellings of Ramayana in all regional languages, this is what we find: the linguistic and literary style does not date back beyond 500 years, and this after giving a wide berth in terms of using linguistic and literary yardsticks.

In the light of these historical facts, who do we credit for providing the inspiration to Valmiki? There’s an answer to this as well: apparently, there existed numerous folk songs both in Sanskrit and other languages prior to Valmiki’s time, and that he took inspiration from them. Let’s accept that for a moment.

But the question arises: so what happened to all these pre-Valmiki folk traditions and stories? If we argue that these were lost due to the vicissitudes of time, then it is not absurd to argue that those evidences that proved the exact opposite of this argument were also lost due to the vicissitudes of time. This is akin to saying that the eggs that were used to make omelette became chicks, and over time contributed to the increase in the species of hen. Therefore, we need to debate using available evidence instead of speculating on something that might or not have existed.

It is common knowledge that all retellings (and/or work based on Ramayana) of Ramayana in Sanskrit and various Indian languages (including Kamban’s in Tamil)—have expressed their debt to Valmiki. We have a big list of the writers of such Ramayanas beginning with Sanskrit poets such as Kalidasa, Bhavabhuti, Bhoja, Rajashekhara and Kaviraja, and the Kannada writer and poet Kuvempu. One can quote their dedication and reverence towards Valmiki in their own words, but constraints of space prohibit it.

If this is the case, what is the background, what is the motive force behind the claim that Ramayana has 300 faces?

In reality, what exists behind this sort of deceptive claim is not scholarship but tactics. What exists is the practiced moves of the Leftists. The first step the Leftists take while opposing something is to reject the object of their opposition completely. When they encounter factual, evidence-based counter arguments to this, they immediately indulge in the logical fallacy known in common parlance as change of grounds. One of the ways they do this is by claiming that “we reject the contention that there is only one definitive text.” And when even this claim is proved false, again by citing facts, evidence, and sound logical reasoning, they turn around and assert that “there is no such thing as definitive; there is no such thing as ancient; these things kept changing variously at various points in time.”

These Leftists who seem to have made it their mission to criticize and reject everything that deviates from or doesn’t fit with their worldview do not need serious study and evidence. However, those who oppose them must come equipped with scholarship, evidence, and sound reasoning! Indeed, their history shows that they’ve made a tradition of the ugly device of spit and run.

About a century or so ago, when research on Indo-European languages was in its infancy, some comparative linguistic scholars who couldn’t digest the fact of Sanskrit’s antiquity floated a fiction of a Proto-Indo-European language, which they held was older than Sanskrit. The story of how ridiculous and laughable this theory proved is now largely forgotten. This sort of mischief in the academia has continued in the case of the so-called 300 Ramayanas as well.

[pullquote]What exists behind the deceptive claim of 300 Ramayanas is not scholarship but tactics. [/pullquote]

Recently, Chandrashekhara Kambar, our latest Jnanapith winner commanded thus: “the original Mahabharata where Kauravas were the heroes and Pandavas the villains has been turned on its head in recent times.” Indeed, he has said nothing new. His is a variant of a sizeable lineage of such Mahabharata distortionists. And this distortion has been comprehensively, convincingly demolished long ago by scholars like V.S. Sukhthankar, whose On the Meaning of the Mahabharata is perhaps the finest rebuttal. In this case, Ramayana too shares the same distortionist fate.

If one reads the work of scholars like G.K. Bhat, who has compiled the Baroda edition of the Ramayana (with all its interpolations and various tellings), Dr. V. Raghavan, the foremost authority on Ramayana, K.R. Srinivas Iyengar, and Dr. K. Krishnamurthy, the shocking weakness of A.K. Ramanujan’s Ramayana scholarship will become evident. Indeed, in the world of scholarship, any nonsensical prattle in the name of “freedom of speech” without presenting evidence is not only ridiculous but dangerous as well.

A supremely gifted poet immortalized the story of a famous individual in the form of an epic poem.  By that, he earned the honour of becoming the Adi Kavi (the First Poet) of the entire literary tradition of this country’s oldest language. Indeed, Kalidasa has used the word “kavi” as a synonym for “Valmiki.” Until recently, this fact was recognized, accepted and honoured by all regional language writers and poets. Drawn irresistibly by this immortal epic, they have in their own ways, for their own happiness (or profit) retold it, and in many cases, have enriched it in their own unique way. It might sound like a cheap analogy, but this is akin to remaking a super-hit movie into different languages—either a frame-to-frame remake or a remake with minor changes here and there.

What’s more significant is that almost every sect born in India has adapted, adopted and used Ramayana to expound their respective teachings. From the Jainas who got Ravana killed by Lakshmana, from the Bauddhas who focused on Sita’s abduction, from the Vedantins who get Rama to listen to Advaita discourses, from the Vishishtadvaitins who discern Sharanagati in Vibhishana, from the Dwaitins who propel Hanumantha as the future Brahma, from the Shaktas who get Sita to kill a hundred-headed Ravana, from the Shaivas who reject the Vishnu-hood of Rama all the way up to the modern-day intellectuals who regard Ramayana as irrelevant—all of them had to take refuge in the Ramayana itself.

Indeed, the famed verse of Brahma, Param Kavinaam aadhaaram, has come true in an extreme form in the case of the purveyors of the 300 Ramayanas fraud.

A Study on women characters portrayed in the Rāmāyaṇa