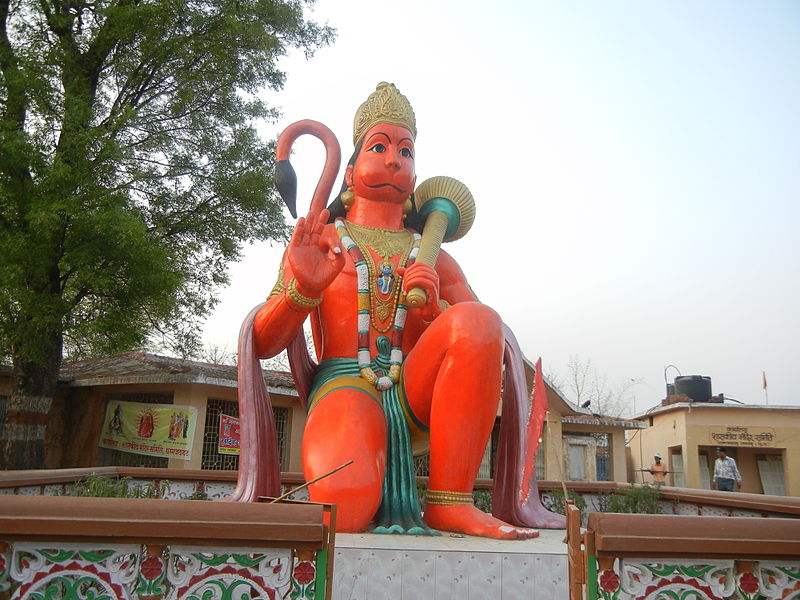 Hashtag #BajrangiTwitter is trending on Twitter, thanks to article in The Wire that talks of “militant Hinduism”. After this article was published, social media is seeing an upsurge of Hanuman Consciousness with some great artwork and pictures of Hanuman ji being shared by thousands of devotees across the globe.

The Wire’s article only demonstrates the childish mistaken mapping of Hanuman to a smiling, calm, benign God by the author. Throughout the article she generously maps the vibrancy and energy shown by swayamsevaks as aggression and dominance. The author’s imagination peaks when she writes “The smile on his face has been replaced with strong frown lines. He radiates mean energy against a black and saffron background. His thunderous expression spells danger, and makes it clear he is no longer a server but a destroyer.” And by the way, Hanuman is a Chiranjeevi who lives in the hearts of millions and there is no need to reincarnate (The article is titled Militant Hinduism and the Reincarnation of Hanuman).

Anybody who has even mildly browsed through Ramayana or Mahabharata will know the great prowess of Hanuman Ji. The one who set out to gobble up the sun cannot be just a cute little boy.

There are many instances in the Ramayana where Maharishi Valmiki describes the might of Hanuman ji. The Sundarakanda has a detailed description of Hanuman deciding to cross the ocean to search Sita Ma. With a great desire to cross the ocean, Hanuman grew his body to an immeasurable size and pressed his feet on the Mahendra Mountain. As soon as he pressed his feet, the entire mountain shook and the flowers on all the trees just shed making the mountain look like a mountain of flowers. His press was so strong that Sulphur just shot from the mountain making it look like a volcano. There was a thunderous noise which was heard in all four directions and unable to bear the shock, Rishis, Vidhyadharas and numerous beings who were residing on the powerful Mahendra Mountain just fled. He took off with great force and the energy was so high that trees were uprooted and followed Hanuman in his flight. During this flight, Maharishi Valmiki describes Hanuman’s face as taamram mukham meaning ruddy face and the air from the armpits as vayurjiimootha garjati i.e thundering clouds.

Inside Lanka Hanuman vanquishes demons set out to kill him. He crushes them with his palms, feet, nails, chest and thighs without use of weapons. This sent the demons running in all ten directions, as Maharishi Valmiki describes.

While bringing the Sanjeevani herb, it is said that he just shook the mountain three times, uprooted it and flew it to Lanka as if it was not big task.

The Mahabharata described the interesting encounter between Bhima and Hanuman, both being Vayuputras. Bhima is one of the strongest personalities in the Mahabharata and his prowess is compared to a thousand elephants. His was humbled by Hanuman when he set out to get the Sougandhika flowers for Draupadi. Seeing Hanuman lying there blocking his path, Bhima made a thunderous roar. Beasts and birds fled on hearing the sound but Hanuman slightly opened his eyes with disregard for the mighty Bhima. Unable to move Hanuman’s tail by even an inch, Bhima realized that he was not dealing with a monkey but a great blessed being. Hanuman gives a detailed account of who he is and he also talks about the changes that happen on earth when Yugas change. Bhima is determined that without seeing Hanuman’s original form, he would not leave the place. Hanuman agrees. Vyasa Maharishi describes (as translated by KM Ganguli):

“Hanuman attained his lofty and gigantic body like unto a mountain, furnished with coppery eyes, and sharp teeth, and a face marked by frown, lay covering all sides and lashing his long tail. And that son of the Kurus, Bhima, beholding that gigantic form of his brother, wondered, and the hairs of his body repeatedly stood on end. And beholding him like unto the sun in splendour, and unto a golden mountain, and also unto the blazing firmament, Bhima closed his eyes. Thereupon Hanuman addressed Bhima with a smile, saying, ‘O sinless one, thou art capable of beholding my size up to this extent. I can, however, go on swelling my size as long as I wish. And, O Bhima, amidst foes, my size increaseth exceedingly by its own energy”.

Overwhelmed by the form Bhima says “O lord, by me have been beheld the vast dimensions of thy body. Do thou (now), O highly powerful one, decrease thyself by thy own power. Surely I cannot look at thee, like unto the sun risen, and of immeasurable (power), and irrepressible, and resembling the mountain Mainaka. O hero, to-day this wonder of my heart is very great, that thou remaining by his side, Rama should have encountered Ravana personally. Depending on the strength of thy arms, thou wert capable of instantly destroying Lanka, with its warriors, and horses, elephants and chariots. Surely, O son of the wind-god, there is nothing that is incapable of being achieved by thee; and in fight, Ravana together with his followers was no match for thee single-handed.”.

Hanuman is benign to the Dharmic, a ferocious vanquisher of the Adharmic, a bhakta and a chiranjeevi. To stereotype him to a “Smiling God” shows a clear disconnect with what he truly represents. Hanuman Chalisa beautifully conveys:

Even Yamraj (God of Death) Kuber (God of Wealth) and the Digpals (deputies guarding the four corners of the Universe) have been vying with one another in offering homage to your glories. How then, can a mere poet give adequate expression of your super excellence?