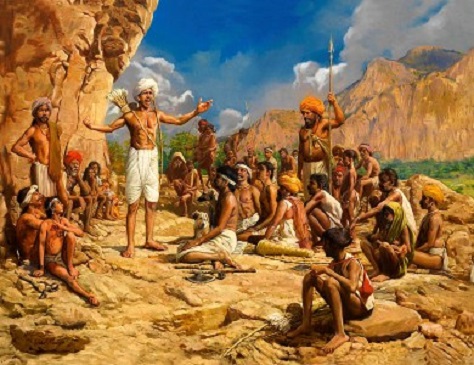 This article was contributed by IndiaFacts supporter, reader, and well-wisher, Shwetank Bhushan.

During the colonial phase of India there was a hero who had the courage to fight against the might of the British Raj and his leadership was so sincere that people joined his struggle without a second thought. This great hero was Birsa Munda.

Birsa was born in Bamba, a suburb of Ranchi (Now Jharkhand) on 15 November, 1875. The son of poor parents Sugna Munda and Karmi Hatu, he grew up around the forests of Bohonda, grazing sheep and dancing in the akhara. He also developed an interest in playing the flute. He went round with the tuila (one-stringed instrument made from pumpkin) in the hand and the flute strung to his waist. Due to abject poverty, his father had to move from place to place looking for work, which caused Birsa to move to Ayubhatu, his maternal uncle’s village where he stayed for two years.

He went to school at Salga, run by one Jaipal Nag. There he came in contact with a pracharak who visited a few families in the village which had been converted to Christianity and attacked the old Munda order. As he was sharp in studies, Jaipal Nag recommended him to join German Mission School in Burj, Chaibasa.

Since converting to Christianity was obligatory to join the school, Birsa became a Christian and was renamed Birsa David, which later became as Birsa Daud.

One day while the class was going as usual in the German Mission School, a teacher Dr Nottrott repeatedly used disparaging words for the Mundas. Birsa returned the favor by criticizing Dr. Nottrott and the missionaries in razor-sharp words eventually leaving the school in protest.

That was a turning point in his life as he realized the maxim that saheb, saheb ek topi hai (all whites, the British and the missionaries, wear the same cap).

Soon after leaving school, Birsa and his family left Chaibasa and gave up their membership of the German mission. As an adolescent, Birsa heard tales of the Munda uprisings (ulgulaan) of the past and the Sardars (leaders) of the community urging the people to revolt. The Sardars talked of a golden age when the Mundas were free from oppression and foretold a time when the ancestral right of the community would be restored.

They saw themselves as the descendants of the original settlers of the region, fighting for their land, and reminding people of the need to win back their kingdom.

Making of a Prophet:

Instead of improving his life, Birsa realized that his culture was getting destroyed as thousands of Mundas were being converted.

The colonialist connection of Christianity was a powerful tool of selling Christianity as the religion of the downtrodden. Any connection between the rulers and the missionaries was however indirect.

Around 1890 Birsa went to Bandgaon and that is where he came in contact with Anand Pandey, who was the ‘Munshi’ of Jagmohan Singh, the  zamindar of Bandgaon.

Pandey was well versed in the principal scriptures of Vaishnavism (as customary in the area) and with the Hindu epic-lore. Birsa also met a Vaishnav monk who preached there for two months. From them Birsa learnt a lot about Hindu religious teachings and got the opportunity to read the Ramayana, Mahabharata and other Hindu scriptures.

He gave up eating meat, began worshipping the tulsi plant, and wore the sacred thread.

Eventually he started a new tribal faith known as ‘Birsait‘ which laid stress on prayers, faith in God, observance of a code of conduct, abstention from alcohol, sacrifices and so on. His movement was aimed at reforming the tribal society. He urged the Mundas to stop believing in witchcraft and sorcery. Birsa also wanted people to once again work on their land and cultivate their fields.

Birsa’s claim to be a messenger of God and the founder of a new religion sounded preposterous to the missionaries as his simple system of offering was directed against the church which levied a tax.

Birsa Munda started to propagate the principles of Hindu religion and advised converted tribal people to revert to their original religious system. He also urged the people to worship cow and opposed cow slaughter. The Mundas, Oraons, and Kharias flocked to Chalkad to see the new prophet and to be cured of their ills. Soon both the Oraon and Munda population in the entire region became devoted ‘Birsaities’. Contemporary and later folk songs commemorate the tremendous impact of Birsa on his people, their joy and expectations at his advent. The name of Dharti Aba was on everybody’s lips.

At that period of history, Mundas were utterly frustrated, disappointed and discontented. They felt that the Zamindars, moneylenders, Christian missionaries and the British courts, had only one point program and that was to exploit the Mundas. The missionaries lured them to become Christians and the others attacked on their traditional values and socio-economic infrastructure.

Birsa left Chalkad in the wake of the mounting Sardar agitation. He participated in the agitation stemming from popular disaffection at the restrictions imposed upon the traditional rights of the Mundas in the protected forest. During 1893-94 all waste lands in villages, the ownership of which were vested in the Government, were constituted into protected forests under the Indian Forest Act VII of 1882. In Chhotanagpur, the forest settlement operations were launched and measures were taken to determine the rights of the forest-dwelling communities. These orders were sometimes not understood by local officers who acted as if all right of forest-dwelling communities had been curtailed. Petitions were submitted claiming the resumption of what they called were their old ancestral right to free fuel, grazing etc.

Birsa led a number of raiyats of Sirgida to Chaibasa with a petition for the remission of forest dues. Nothing came of it. The Chotanagpur Protected Forests Rules framed under the Indian Forest Act came into force in July 1894. Viewing Birsa’s involvement in the Sardar agitation with concern, Anand Pandey advised him not to let his emotion overpower him; but he would not turn a deaf ear to the inner voice. Thus his three years’ association with Pandey came to an end in 1894.

To the twin challenges of agrarian breakdown and culture change, Birsa and his supporters responded through a series of revolts and uprisings. The movement sought to assert rights of the Mundas as the real proprietors of the soil, and the expulsion of middlemen and the British. While landlords and moneylenders were taking over their land, and missionaries were ridiculing criticizing their traditional culture. He recruited volunteers to fight the British Government.

What worried British officials most was the political aim of the Birsa movement, for it wanted to drive out the missionaries, moneylenders, landlords and the government officials and set up a Munda Raj with Birsa as its head. The slogan of the movement was “The reign of the Queen is over and the Munda Raj had begun.

Even though the Munda agitation was not an all-India movement, it shared the essence of the national freedom struggle.

As the movement gained momentum the British officials became desperate. They spread rumors that on a particular day the non-believers of ‘Birsaites’ from the region are going to be massacred besides winning some people over by bribing.

As a result of these manipulations Birsa was arrested on 24 August 1895.

The British Raj convicted him on charges of rioting and he suffered rigorous imprisonment for two years in the Hazaribagh Jail.

Birsa was released in 1897, following which he began touring the villages to gather support. The Christian missionaries were getting desperate as Birsa became the biggest stumbling block in their path of conversion. So they co-operated with the colonial officials to get Birsa’s followers arrested. Birsa went into hiding for two years.

During his period in hiding he attended a series of secret meetings and practiced the traditional ritual of throwing arrows on the effigy of Queen Victoria and enemies.  By the end of 1899, local folklore states that Dharti Aba the messiah reappeared with magical powers to invigorate his followers, the ‘Birsaites’. Birsa Munda’s longtime companion, a Munda woman Sali was instrumental in organizing the women in the movement.

Birsa gave a clarion call to the Birsaites of a decisive war against the British Raj. He used traditional symbols and language to rouse people, urging them to destroy the British and establish a kingdom under his leadership.

After intensive preparations, the Birsaites made a gallant bid to overthrow the British Raj. They raised the white flag as a symbol of Birsa Raj. The Anglican Mission at Murhu and the Roman Catholic Mission, at Sarwada was the main target. The Birsaites openly declared that the real enemies were only the SahebLog (British Officers and Missionary heads) and the Christian Mundas would not be touched.

In January 1900, the entire Munda community was up in arms. During the Revolt of 1899-1900 Birsa emerged as the supreme leader of the Mundas. After a series of concerted attacks for nearly two years on strategic the Munda warriors started congregating on “Dombari Hill” (Nearly 20 Kilometers from the present day Ranchi-Jamshedpur Highway), on the call of Birsa. They adopted Guerilla war tactics. They attacked police stations and churches and raided the property of moneylenders and zamindars. The revolt rocked the British administration to the extent that the commissioner declared a heavy cash reward for the arrest of Birsa.

The then commissioner Mr. A Fobes and Deputy Commissioner Mr. H.C. Streattfield, rushed to Khunti with heavily armed battalions to crush the Ulgulan (Total Revolt) for “Abua Disun” (Self rule). Subsequently British forces attacked the Munda warriors congregated at “Dumbari Hill” and made indiscriminate firing like that of  “Jalianwala Bagh” killing several hundred people. The whole hill was littered with human corpses. But Birsa somehow managed to escape.

He was treacherously nabbed while asleep at Jamkopai forest in Chakradharpur (Bengal) on 3 March, 1900 and mysteriously died in the jail on 9 June of the same year.

Even after decades have passed Birsa’s birth anniversary which falls on 15 November, is still celebrated by the tribal people in as far as Mysore and Kodagu districts in Karnataka,while an official function takes place at his Samadhi Sthal, at Kokar Ranchi, Jharkhand.The legacy of this brave warrior lives through the war cry of the Bihar Regiment which is Birsa Munda Ki Jai (Victory to Birsa Munda).

Unfortunately few of our countrymen know of this valiant freedom fighter but, it is not too late to propagate the legacy of this great hero who died unsung.