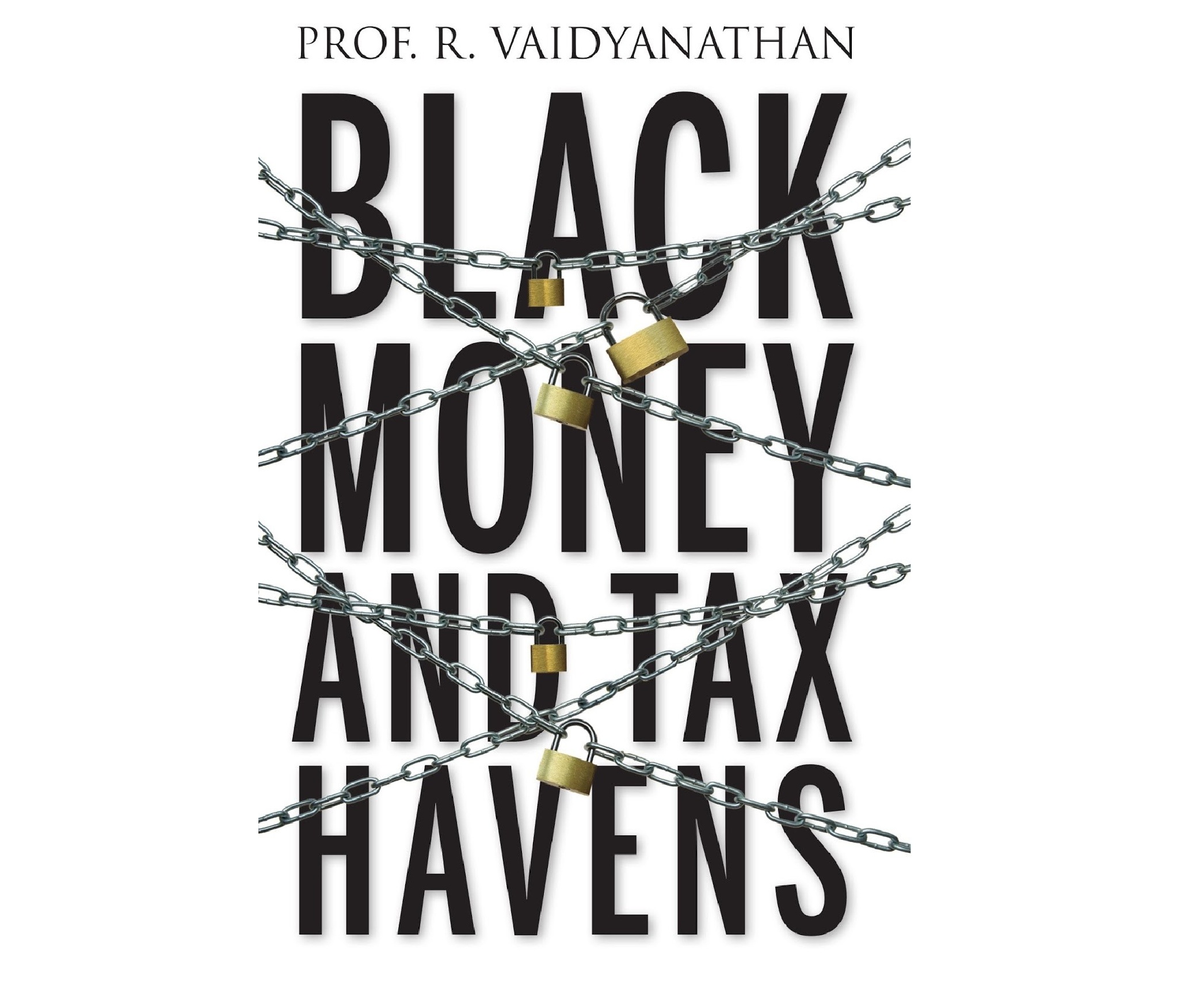 “Black Money and Tax Havens” by R Vaidyanathan can be purchased from Amazon.

The subject of black money, and tax havens that act as conduits for such black money, has been the topic of intense fascination and speculation by the lay public for decades. It has been the theme of countless novels and movies, and some action by governments the world over. In India, the war against black money is one of the few areas where there seems to be unanimous political consensus on the need for inaction. Prof. Vaidyanathan’s book is a short and accessible reckoner for people wanting to gain more than just a superficial understanding of this subject.

First, some numbers. Calculating accurately the amount of black money generated in an economy is neither possible, nor estimable with any degree of accuracy. This is well-borne out by the varying estimates that have come over the decades.

At a conservative estimate of black money, at 30 per cent of the economy, we are looking at a number of $680 billion, or forty four lakh crore rupees, based on the World Bank’s estimate of $2.264 trillion as India’s GDP in 2016. (Explore via Google Public Data)

The causes that lead to the generation of black money are varied – “high rate of tax, Corruption, Procurement can generate black money, Suppression of receipts, inflation of expenditure, Issues of permit and licenses, Ineffective tax laws, and Political factors“.  The methods are equally varied and innovative – “Land and real estate transactions (possibly the most important class of assets used for investment of black money), Financial market transactions, Bullion and jewellery transactions, cash economy and use of counterfeit currency, Trade based money laundering“.

While at least some of the black money generated in India comes back into the country via various forms of round-tripping, most of it is first goes offshore.

People may remember the 2007 acquisition of Hutchison Essar by Vodafone for a little over $11 billion. The Income Tax department maintained that tax on capital gains to the tune of eleven thousand crores was due. Vodafone disagreed. Hutshison Essar was owned by the Hong Kong based Hutchison Whampoa group. But “Hutchison owned its Indian businesses via a maze of holding companies registered thousands of miles away in the Cayman Islands, the British Virgin Islands and Mauritius.” Thus Vodafone paid no tax on the transaction, since it was “an offshore to offshore transaction.” The Indian exchequer was denied more than two billion dollars in capital gains tax, thanks to the routing of the transaction through a maze of tax havens.

Contrary to popular notions , thanks in no small part to movies , that Switzerland is the world’s only haven for black money, Prof Vaidya tells the reader that there are as many as “63 jurisdictions providing varying degrees of incorporation concealment and protection from probing eyes.” Anonymity is the enabler of these tax havens. According to Baker, “British Virgin Islands alone reportedly had 180,000 and the Caribbean as a whole had 500,000 [anonymous entities]. More were being formed at a reported rate of nearly 200,000 a year.”

While Bermuda and Liechtenstein may joust for laying claim to being the world’s oldest tax havens, the honour must go to Switzerland, a country that pitched its “neutrality” and “utmost secrecy“, and got untold billions of dirty, bloody, and genocide money in return. It boggles the mind that an impenitent haven for black money like Switzerland is not the “number one country in the list of Transparency International for being the most corrupt country.”

“Another world war, twenty-one years later, brought more wealth to Switzerland, this time in the form of riches looted by the Nazis. So great was the Nazi hunger for gold that even gold from the dental fillings of murdered Jews was not spared. The bankers accepted everything that came their way without question…”

The world’s biggest offshore tax haven however is Britain. Prof Vaidya writes – “Nicholas Shaxson, author of ‘Treasure Islands: Tax Havens and the Men Who Stole the World’, writes of a ‘British spider web’ by which the British Overseas Territories and Crown Dependencies funnel cash to the City of London… from all corners of the globe.” Cayman Islands and Bermuda are British Overseas Territories, and these are “threads in the spider web that collect money and channel it to the City of London.” Basically, Britain manages to vacuum up a large part of the world’s dirtiest money through proxies and ‘overseas territories.’

Equally mind-boggling is the example of Luxembourg, a country smaller than a thousand square miles. In connection with tax-havens, this country came into notoriety only because of the Panama Papers leaks and the hard work of the International Consortium of Investigative Journalists (ICIJ) that studied over 28,000 pages of documents. Just as the lawyers were the key enablers of Al Capone’s syndicate, accountants have greased the wheels of the modern day corporation’s tax evasion gravy train. The author mentions Pricewaterhouse Coopers (PwC) as one such accounting firm that “considers Luxembourg as a place with ‘flexible and welcoming authorities’ who are ‘easily contactable’ and offer a ‘quick decision-making process’“. It also “said in 2013 that it had more than 2,300 employees in Luxembourg and that it expected to add another 600 in 2014.“, One building at “5, Rue Guillaumme Kroll – is home to more than 1,600 companies; another at 2, Avenue Charles de Gaulle houses roughly 1,450; and a building at 46A, Avenue J.F. Kennedy is home to at least 1,300.”

It is indeed a paradox of twentieth-century politics and economics that the under-developed nations of the world have continued to see their wealth siphoned off to European countries, this time through corrupt oligarchs, dictators, and dynasties. It is estimated that Africa alone has lost over one trillion dollars in illegal capital outflow as a result. The entire external debt of the continent is estimated at less than two-hundred billion dollars.

At least some readers will be less interested in the details and data with respect to tax havens and more in the specifics as they apply to India.

Notwithstanding the change in the political dispensation in power in Delhi, the long and short of it is that there is apparently near complete unanimity across the political spectrum on the need to do nothing to prosecute those who have salted away hundreds of billions of dollars (that would be lakhs of crores of rupees) of black money in offshore tax havens. In the author’s estimation, “governments may not be serious” in recovering illegal money stashed abroad by Indians.

For example, India signed the “landmark, international anti-corruption” United Nations Convention against Corruption (UNCAC) treaty in 2003, but ratified it only eight years later, in May 2011!

Or, take the case of Hasan Ali Khan, “a Pune horse-breeder, who was alleged to have indulged in several illegal transactions through the UBS Bank of Switzerland.” The government had raised tax-demands of Rs.71,848 crore from Hasan Ali. In Jan, 2007, the government sent a request to the Swiss Department of Justice and Police, asking for legal assistance. The documents they sent, however, were found to be forged, and the Swiss government sought more information. Till 2017, the government of India had not responded to the Swiss request – Ten years of soulful ‘you-complete-me‘ political consensus between the two major political parties one rarely sees in Parliament.

Prof Vaidya makes a few suggestions on how India could get these hundreds of billions of dollars back. One is to “Do as the Americans did—jail the highest ranking official of an International Bank in India. Begin by asking them for the details of the bank accounts of all Indians with their bank. If they refuse, put them in jail. This was done to the Swiss by the US and they complied within two days.” While the author does not mention who this banker was, he could be referring to Martin Liechti, who was UBS’ former head of wealth management for the Americas, who was arrested by the US, and who in turn got himself a “non-prosecution deal, with immunity, from federal prosecutors when he immediately turned over the secret binder to them, persons briefed on the matter say.” Needless to say, the chances of that happening in India are rare, for reasons the author himself elaborates.

The impetus to crack down on these illegal tax-havens came not from the developed world, not from some dawning realization of the need for honesty, but from the threat these tax-havens posed to their security. Radical Islamic terrorism was using these tax-havens, and the concomitant secrecy they provided, to channel money to fund terrorism around the world. The terrorist attacks of Sep 11, 2001, were the proverbial wake-up call to developed nations to do something about tax-havens.

One of the most interesting points the author makes in this connection, and one which I believe needs to be explored in greater detail, is the collapse of the notion of the modern state itself as a consequence of “the activities of transnational corporations aided by tax havens on one side and terrorists on the other side…” Specifically, the concept of the nation state and sovereignty, which “evolved after the Thirty Years War in 1648 in Westphalia (the Peace of Westphalia)” and the three principles that evolved, viz., the principles of sovereignty of states, of legal equality between states, and of non-intervention.

“Interestingly, all three are questioned by contemporary leaders of the West and radical Islam.”

As for India, the author, in a moment of frankness and despondency, confesses that “since all organs of law enforcement have been consistently emasculated and made and are emaciated, it is difficult to expect any punishment for the lot through the legal process. Naming them and bringing them to shame is a good way to handle them.”