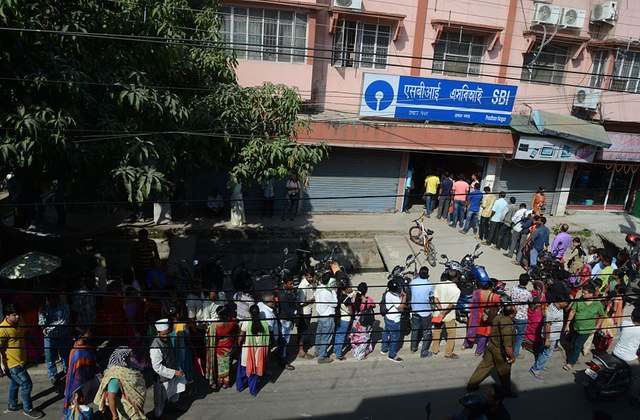 Demonetisation was a brave policy to implement and risky. But then serious policy measures entail risk and India’s political culture is normally risk averse. As a result, it allows consequential missteps already taken to persist. And the untold damage they cause is ignored because no one is willing to take the responsibility for change. On the above grounds alone one cannot deny the Modi government the accolade of courage. Not just demonetisation, overdue bold policy measures are being adopted on other fronts and one can only urge that they continue. Whatever accusations are levelled at the Prime Minister, he is surely the first since independence to demonstrate he possesses gritty courage. And Prime Minister, Narendra Modi is serious in his quest to eliminate corruption unlike that pitiable tax inspector turned politician, who went from ceremonious fasts to doing metaphorical cartwheels to stay in power, at any cost.

The manifold impacts of demonetisation are not yet apparent though some can be predicted with reasonable confidence. It is clear that much untaxed wealth and wealth generated through criminal activity have been dealt a necessary setback of significance. Despite many warnings those who sought to evade legitimate taxation have lost some of their ill-gotten gains. Those who used their cash to buy real estate, gold and other assets may have escaped temporarily, but co-conspirators, who had engaged in business deals with them and were holding the cash proceeds generated, have lost out. Someone holds the cash at the end of the chain, in the game of pass the parcel! Additional steps are required to identify and deprive owners of ill-gotten gains in the shape of benami property holdings. The uncovering of assets like gold and precious objects is more problematic, but severe sanctions against their use as havens for illicit wealth can make resort to them difficult while existing hoards are also forcibly disgorged.

Some of the retinue of crooks, who had entered the profitable business of Indian politics and who had foolishly kept proceeds of bribery and extortion in cash are now hysterical. They can incite mobs to burn public property if upset, but cannot convert their worthless notes into legal tender. In addition, a vast network of criminality, stretching from legislators to Maoists and Islamist bombers and complicit public administrators, are part of the cash economy. Cash transactions also facilitate other forms of criminality, from counterfeit drugs that kill and adulterated foodstuff to every conceivable variety of cheating and robbery. Several pages would be required to compile their sheer extent. Some of them may escape temporarily because their cash proceeds have been diversified into real estate, gold, etc. But the vast daily functioning of such grotesque illegality is conducted in cash and they have been caught with their veritable pants down! The benefits of this mammoth blow to them are inestimable.

The Pakistani mint printing presses will also have to undertake expensive reconfiguration in response to the new Indian note series introduced and these are less vulnerable to imitation. Pakistan has long counterfeited Indian currency, which meant Indian taxpayers were themselves financing the war of terror waged against them by the Jihadis. The gradual introduction of polymer, expensive, but long lasting and much harder to counterfeit, will mitigate this diabolical state of affairs as well. Although the counterfeiting of Indian currency to finance subversion will not be quite so easy now for Pakistan, India should have repaid the compliment by retaliating on a grand scale and creating havoc in the land of the pure! It is worth noting that counterfeit currency has almost certainly also entered the blood stream of Indian politics and has been made available by Pakistan to anyone waging war against the Indian state and its people.

However, ultimately, the phenomenon of demonetisation must also be judged on the basis of its economic impact and quite clearly most economists were uneasy about its likely consequences. Only the future will tell if the economy shrank significantly owing to demonetisation and that must be balanced against the kind of benefits outlined above to judge its overall merit. The figures being cited by political opponents of demonetisation seem excessive, but GDP shrinking by over three-quarters of one percent could be a cause for concern. An important segment of the Indian economy, nearly 45% of GDP being informal according to the CSO, is essentially dependent on cash-based credit and cash transactions. Its activities will have been disrupted and will reduce total economic activity in the short term. A portion of them can only function by avoiding engagement with the tax regime and their resumption may not occur.

India’s demonetisation was unprecedented in scale since almost 88% of the total currency in circulation, by value, was instantly withdrawn. But there could not be comprehensive advance planning of policy to mitigate the disruption in the immediate aftermath of demonetisation on the 9th November morning. Only a few could be in the know and even ordering the printing of additional new currency notes would have threatened the imperative secrecy needed for demonetisation. Nevertheless, the evidence emerging is promising and seems to show that possibly 4 lakh Crore rupees of unaccounted wealth has entered the banking system, 26% of the amount withdrawn in demonetisation. This is a significant figure and a true measure of the potential positive impact of demonetisation in reducing tax evasion. Buoyant tax revenues in December 2016 are also a sign of an important change in the behaviour of tax payers. And the lowering of inflation is particularly welcome since it benefits poorer sections of Indian society.

The related desire to move towards a digital money economy is commendable and the experience of demonetisation and the enhanced associated resort to bank transactions is a welcome prod in that direction. Data on electronic payments indicate a surge in such transactions though some of it is a substitute for legitimate cash spending since notes are only becoming available slowly. Its benefits are significant for creating a more formal economy and improving the parlous condition of the capital base of many Indian banks. The shock to the real estate market may have a negative impact on overall growth in the short term since it constitutes 13% of GDP. However, it is a price worth paying to cleanse this important sector of the Indian economy of black money. Housing will become more affordable once speculation and black money entering it retreats, with prices already down between 30-40% in four important metros. The sight of Indians queuing for long hours to exchange money, although quite a few them evidently hired by third parties, highlighted the unusual patience of ordinary Indians. But some of them did indeed suffer because they depend on cash for daily employment and survival.

Economic crimes stem from a variety of roots, one of which had been India’s penal rates of taxation that unavoidably invited it. Once prodigious quantities of untaxed cash swirl in the economy they criminalise the polity and crime itself is encouraged as a growth sector because finance for it is available. Penal rates of taxation have now been removed in India though room for fine tuning remains. The sheer size of the Indian economy, the prospect of increased private wealth and its greater spread among the population will allow broadening of the tax base. This is a virtuous circle, because requisite spending on essential public services like defence, education, health, infrastructure, etc. does not rise in equal proportion to population size. How taxes are spent is also an issue since blatant waste and leakages prompt disenchantment and undermine the incentive to pay taxes honestly. A government eager to sanction tax evaders must also put its own house in order and spend wisely and with demonstrable probity.