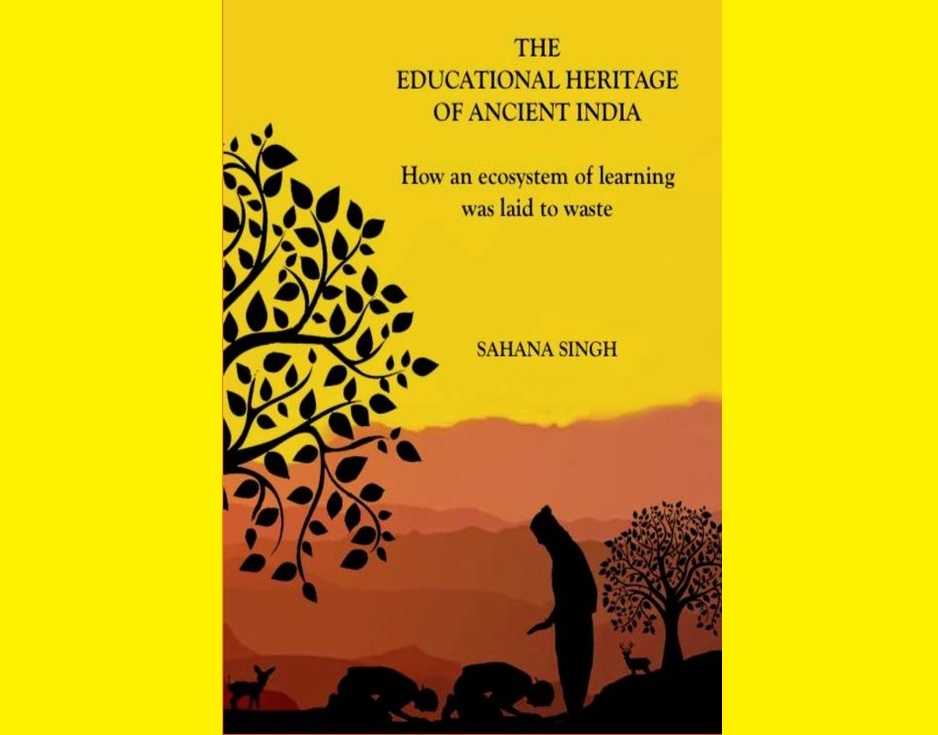 The Educational Heritage of Ancient India: How an Ecosystem of Learning was Laid to Waste by Sahana Singh is available on Amazon.

In her book, The Educational Heritage of Ancient India, Sahana Singh shakes the dust off India’s glorious but forgotten past in a revealing discourse. To begin with, the book’s cover with its vibrant illustration of an acharya teaching his shishyas silhouetted against the sun’s early morning rays is evocative of India’s intellectual awakening to a time before time. Such a time in the country’s past that had a robust, structured and institutionalized education system was during the Vedic Ages. India was in fact a pioneer in applied and pure sciences, long before they were conceived in the Arab world (let alone Europe). Singh’s book takes the reader through a vivid journey of pedagogy in time. There were forest universities – not mere mythological episodes – but holistic centres of learning in the fields of literature, art, the Vedas, grammar, metrics, law, logic and solid geometry. These were followed by well-entrenched urban universities, which had exacting standards for clearing entrance exams and graduating. Each university competed with the other to carve a niche for itself in specific fields of study. Acharyas or teachers from many of these universities had produced treatises on medicine, polity, economy, quadratic equations, trigonometry, arithmetic progression, differential calculus and many more.

One of the takeaways for me from this book’s earlier chapters was that education meant practical demonstration of learning and not mere regurgitation or rote. It breaks the stereotype that ancient Indian system of learning was synonymous with mechanical chanting of the scriptures alone. Knowledge was in fact applied to the building of tangible artefacts such as irrigation canals, rainwater harvesting and town planning. Similarly, ancient medicine was not only about local knowledge systems dealing with herbs, emollient, mind-healing or diet. It included diagnoses of ailments, skin grafting, surgery and many more. These were things that existed, were experienced by our ancestors and were the outputs of educational rigour. Perhaps it is time for us to revisit our mythologies and epics to sift through stories and recognize historical facts as Singh has done. Let us not be lulled by current mainstream media and scholarship, into believing that most of it was either a transient, mythological event or intervention by a divine entity.

Many of the ancient Indian scholars predated their western counterparts from Eratosthenes to Newton by several centuries. In this regard, the book reveals the critical role played by India as a knowledge hub for countries across the globe through the medium of trade. Singh treats trade relations as not sheer transfer of goods, but also of knowledge. Movement of commerce coincided with the advent of literary ambassadors from China and Persia. They were the vehicles for transporting learning from India to China, the Arab world and eventually to Europe. The book also contains historical evidence to prove that Jesuit missionaries took back mathematical treaties from Kerala to Europe. This historical event also coincided with Europe’s awakening to the renaissance. Singh thus debunks the common narrative of cultural servitude, ironically endorsed by our present day school textbooks. A humble acceptance of the debt we owe to the West for bequeathing to us the spirit of scientific inquiry and reason has become ingrained in our psyche. Singh’s book reminds us of those forgotten moments in history that tracks down western philosophy and scientific revolution back to their genesis in Indian soil.

If the reader feels sanguine about the intellectual achievements of our ancestors through the first half of the book, the second half offers a striking contrast. The latter part of the book sets the tone to one of introspection at the poignant historical events that were played out. Singh leverages the change in tone to juxtapose a positive development (i.e. knowledge dissemination) to contrast it with the deep blow dealt to the creative genius of the original scholars, through plagiarism and absence of intellectual property rights. Further, the maniacal massacre led by Bakhtiyar Khilji in several universities of North India, silenced forever some of the brightest minds in the land.
India’s treasure trove of knowledge and learning was lost forever and Alexandria with its suspect literary sources became the world’s knowledge repository. Subsequently, she critiques through documentary evidence pieced together from royal biographies, the uninformed and reactionary measures, which Muslim rulers undertook to undermine classical education systems. It was followed up by the British, who systematically destroyed the last vestiges of our grand, intellectual empire. In this, she lends voice and builds a logical narrative to Sitaram Goel’s works that described the destruction of Hindu temples and centres of learning, due to Islamic conquests and missionary zeal.

It is common knowledge that the advent of the Western forces, post Islamic domination in India was more than political conquest and extended to continued financial drain. Singh adds a very pertinent dimension to all this – the meticulous and wilful undermining of India’s scholastic legacy from Mueller to Macaulay. Perhaps we should rethink Max Mueller’s contribution to Sanskrit, if it was to be the means to fuel Europe’s advancement at India’s cost. In the years that followed, Macaulay sealed the fate of India’s rich history of learning, by unleashing the so-called modern education. Thus, a society that was somewhat familiar with its cultural legacy, stood aside and made way to a new generation that had been skilfully taught to forget it.

The post-colonial narratives and scholarships that have grown around gender, caste and religion owe their debt to Macaulay’s educational system. Singh reveals the ground reality of such contrary narratives through the astute and invaluable findings of Dharampal. We had been taught and taught well to diligently rob our own self-image, to exult in it. Perhaps those, who wish to lazily criticise the ancient knowledge systems for their supposed caste and religious exclusivity, ought to acquaint themselves with Singh’s work.

In my own years of studying history and polity at reputed Indian universities, there was no module, let alone a discussion that helped us tie all these seemingly sporadic historical episodes together. India’s past was always a jigsaw puzzle of disjointed parts, of disconnected narratives, of disdain towards a lack of scientific temper and a dark guilt. Ironically, students of modern Indian universities today are still fed with a stream of narratives leading us to believe that intellectual renaissance is a gift bequeathed from our colonial legacy alone.

What we have lacked thus far was an impact study that could weave together the aftermath of these politico-cultural and historical interruptions, seamlessly and meaningfully. This discourse on India’s educational heritage and the historical brunt it bore – as undertaken by Sahana Singh – does precisely that. We, as intellectuals, researchers, thought leaders and laypeople have a long way to go before we can declutch from mainstream discourse of acceptable labels. We need to revisit not just our educational heritage as Sahana Singh has done, but apply Indic lenses on other aspects of our cultural past, such as profession and power structures, gender and social dynamics, linguistics and regional influences to name a few. In short, we need a multi-disciplinary research into our past. Let us begin by examining those that gave us labels and stereotypes as unassailable truths.

Sarita Seshagiri holds a PhD in Political Science from the National University of Singapore, a Masters in Political Science from Jawaharlal Nehru University and Bachelors in History from Lady Sriram College, New Delhi. After her doctorate she joined some of the leading multinationals in mobile technology as a user experience researcher-ethnographer in their research divisions. She has presented papers in leading conferences on human computer interaction, user behaviour and social technology. Presently, she is a visiting faculty in International Institute of Information Technology, Bangalore. She can be reached at saritasworld@gmail.com