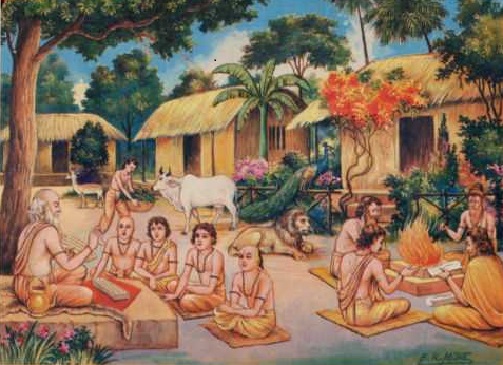 What does India have to offer? It is a question which is often put to Indians by a curious visitor. The answer is seldom easy or straight. Indians usually launch into a confused ramble about the ‘diversity’ of their country. They argue that India has almost every type of climate, dozens of languages, exquisite culture, finger-licking food, etc. They actually claim that India has so much to offer, that it is hard to choose. Though India does offer many of the above mentioned things, is it what defines us? Our diversity?

India is a Knowledge Tradition

Prof. Kapil Kapoor, the famous scholar of linguistics and literature, begs to differ. He says that what India has to offer to the world, is its knowledge. No other culture has invested so much in the creation, preservation and propagation of knowledge as India has. Despite the unprecedented destruction of the Middle Ages and the Raj and the apathy of post-independence India, Prof. Kapoor says that India still has around 10 million manuscripts. It has a long and rich knowledge tradition.

He stresses that the knowledge tradition of India is continuous, comprehensive and cumulative. It is a long tradition that even by the most conservative of estimates is at least four thousand years old.

It is continuous because there has been an uninterrupted tradition of thinkers and rishis since ancient times till now. And these thinkers and scholars were aware of every major contribution before them. They incorporated, summarized and commented not just upon the primary disciplines, but also upon the previous commentators. Thus, every major work contained within itself all that had been said previously in its particular discipline of knowledge. In that sense the knowledge tradition of India is also cumulative. As Prof. Kapil Kapoor says: “No subsequent writer writes without the knowledge of all that has gone before.”[1]

Despite many attempts at its destruction, this knowledge tradition of India lives on. Ancient Greece, another knowledge tradition, was destroyed by Christianity. The same happened with other similar traditions as well. India is one of the very few which have survived.

It is comprehensive because it covers almost all domains of knowledge. Language, linguistics, grammar, logic, mathematics, science, astronomy, architecture, sculpture, dance, music, painting etc. are some of the main areas and disciplines, which are covered by Indian knowledge tradition. Its comprehensiveness is also illustrated by one example, the example of Sanskrit grammar:

Sadly, the state of affairs is no longer exemplary. Having survived the destruction and mayhem of the medieval ages, the British dealt a severe blow to Indian education system, summarized in the famous words of Gandhi:

“I say without fear of my figures being challenged successfully, that today India is more illiterate than it was fifty or a hundred years ago, and so is Burma, because the British administrators, when they came to India, instead of taking hold of things as they were, began to root them out. They scratched the soil and began to look at the root, and left the root like that, and the beautiful tree perished.”[3]

Dharampal have studied the destruction of Indian Education System by the British in detail. Recently, a brilliant book by Sahana Singh, The Educational Heritage of Ancient India: How an Ecosystem of Learning was Laid to Waste captures the issue.

The British did not just change the medium of instruction. They uprooted entire disciplines of Indian education system and supplanted them with European disciplines. Suddenly, Indians were studying the Western disciplines in Western languages. And thus, the pain of Bade Bhaiyya at being unable to remember all the eight Henrys of England, while living in a village in Uttar Pradesh, in the famous story of Premchand.

In one fell swoop by de-recognizing Indian Knowledge Traditions and Indian Education Systems, the British turned one of the most highly educated people in the world to one of the least educated ones. For suddenly, Ayurveda, Jyotish or Vyakaran was no longer a recognized discipline. Those who were educated till days ago were declared ‘un-educated’ and ‘illiterate’. India suddenly discovered, almost overnight, that it was almost 90% ‘illiterate’!

The maid that worked in the kitchen of a British Indian officer was declared illiterate, the maid who knew every Indian festival, Indian calendar, Indian medicine, a bit of Indian philosophy and Indian epics. But her owner’s daughter who was educated in English Medium School run by the missionaries, and who knew nothing of her own culture or tradition, but did know the nursery rhymes of Britain, was declared educated.

What is even sadder is that the Brown Sahibs that inherited independent India made no attempt to re-indigenize Indian Education System. If anything, they further accelerated its westernization. The de-education of India, as Kapil Kapoor is fond of saying, continued apace. The trend has anything but stopped. It is galloping forth, producing generations upon generations of de-educated, de-racinated Indians who have no reason to be proud of India, for they do not know what India has to offer.

Some ‘enlightened’ individuals like Sam Pitroda wake up to India’s ‘ignorance’, forming Knowledge Commission, taking upon themselves the task of ‘making India a knowledge society’. How? Asks Dr. Kapil Kapoor? By introducing English and computer education in India!

A Ray of Hope

Gladly, in 2012-13 some scholars came together to remedy the sorry state of affairs. Under the guidance of Prof. Jagbir Singh and Prof. Kapil Kapoor, many scholars of India’s intellectual traditions, prepared material for elective course for classes XI and XII. The elective course was called “Knowledge Traditions and Practices of India”. It was done with active collaboration of the CBSE team.

The material production team includes fine scholars in their respective domains who have put in a lot of effort to develop the course content. The features of the course as described by the panel are as following:

It aims to provide a broad overview of Indian knowledge traditions, which are continuous, cumulative and intrinsically polycentric.

Knowing about the glorious tradition of knowledge in India, would instill self-confidence and cultural pride in Indian students. Knowing their own tradition, they will be better placed to communicate and negotiate with the foreign cultures and traditions that they will encounter in their life. It would be one step in the direction of re-educating India and coming out of the black hole of knowledge that modern education system in India has dug us in.

The first volume for Class XI came out in 2012, the second for Class XII in 2015. But after a promising start, it has now lost steam. Very few schools are currently offering the course and if the situation persists for long, the course may be scrapped altogether.

Michel Danino thinks that lack of sufficient efforts on the part of CBSE, and some confusion regarding the pedagogy to be adopted by the teachers and schools are some of the reasons behind the sluggish progress of the course.

What can be done, is to spread awareness about this particular course as much as possible, so that at least some among the teachers’ community become aware of its importance. Given sufficient efforts, the critical number needed to for a movement of awareness is not hard to achieve. Following is the appeal of Prof. Michel Danino:

“Please contact all the CBSE schools you know to be committed to Indian culture and request them to write to CBSE specifically asking to be registered for the “Knowledge Traditions and Practices of India” course. Schools should send an email to that effect to the following three email addresses: ktpi2817@gmail.com, jsacadcbse@gmail.com, praggyamsingh.cbse@gmail.com, with copy to micheldanino@gmail.com.”

Let this article also be an appeal to all teachers, educationists, and common Indians who are interested in Indian knowledge traditions and Indian education system; let this be an appeal to the CBSE schools for taking up this course in their schools. This is a unique initiative, taken up for the first time in independent India. Let it not go to waste.

The online modules of the course are available at: