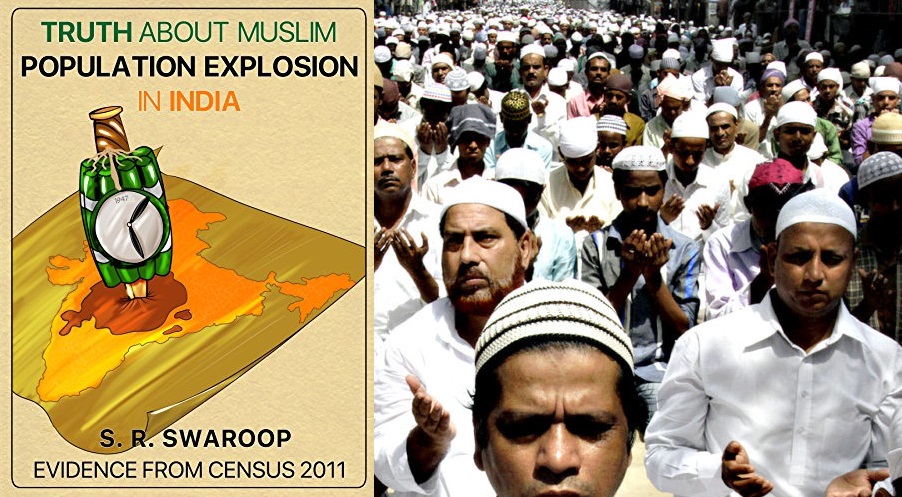 Truth About Muslim Population In India: Evidence From Census 2011 by S. R. Swaroop, 2018 is available on Amazon Kindle for purchase.

“Pakistan and Bangladesh are their fixed deposits. Those are Islamic states, no one can lay claim on them. India is a joint account, plunder it as much as you please.”

What is in a TFR?  The Future!

For us Indians, especially, Hindus Ganga-Jamuna tehzib is a matter of pride.   Where else in the world have they managed it?  Only in India faiths that differ in the core understanding of the nature of divine have co-existed and thrived (some would say at the expense of Hinduism).  But what would be the fate of Ganga-Jamuna tehzib when Ganga dries up?

Truth About Muslim Population In India, by Swaroop, keeps all the arguments on demography in mind and asks the reader to look at TFR from a purely statistical view point.  Then the book goes on to describe the changes in proportion of Ganga and Jamuna, which should be a cause for concern to anyone who is concerned about the fate of Hinduism.  Any mention of TFR, often looked upon with suspicion, is considered an indication of an anti-muslim or anti-minority sentiment.  However, the exercise is significant on several levels.  TFR—the total fertility rate, predicts changes in demography, which in case of a country like India, which has already seen a partition based on demography, should ring alarm bells.  Especially, considering what Kashmir has undergone since partition.

The book starts with a simple decree, that demography is destiny, lays out a few examples to explain how a change in demography of people with different ideologies, religious backgrounds or political ambitious can change the character of a nation.

As a scholar, my ideas about demography and its impact have altered as I have examined the role that demography plays during my travel and stay in many countries.  In addition, both Islam and Christianity (not considered in detail in this book) have a core belief that the divine plan is to convert the entire planet to one religion—theirs.  While countries that are already one or other majority do not have to think about such issues, countries such as India need to pay close attention to such issues, due to her previous experience with this issue.  Furthermore, need to protect or uphold Hinduism should not be considered nationalistic or ethno-centrism as much as a desire to uphold diversity of thought in global affairs, since other ideologies are mainly mono-ideologies, whether theistic or not.   Hinduism, and other dharma traditions that emerged from Hinduism provide a different view of the world, which lead to different solutions and strategies.  Presently, the countries that uphold ideologies other than mono-theistic or communist ideologies mostly lie in Asia, with India being the leader in having given the world a variety of Dharma traditions.

The book is divided into five chapters, with a detailed preface and introduction, which both lay out the structure of the book and establish the need for the book.  The first four chapters are an in-depth description of data both at national and regional level. The fifth and last chapter raises some pertinent questions based on a comprehensive analysis.  The subject matter is dealt-with in detail, with every chapter saturated with information, data and graphs, mainly from census of 2011.

Swaroop’s writing style is colloquial, sometimes humorous, even as the serious issue is addressed.  The straightforward writing helps in making the material understandable from various standpoints.  While data, dissected at national, and regional level, is explained clearly, the graphs and color coding of graphs to depict statistics and changes in demography work effectively.

In addition, the book takes a detailed look at the rise in population than simply stating it as a generic increase in numbers, e.g. highlighting the fact that a 25% Muslim population does not mean it is equally distributed throughout the country.  Instead, it can imply that parts of population are 50% or more and those parts are the ones that can easily demand different rights or worse separation, which has been evident in the case of Kashmir, for decades.

An important contribution the book makes is its reiteration that future of the demography should be ascertained not by the present population but the upcoming, future populations. Following that, the book details the differences in various age groups, highlighting that several parts of the country have a much higher Muslim population between the ages of 0-4, which should be considered as a demographic of the near future.  Demographic changes, as Swaroop explains, are not logarithmic but exponential , and it should be noted that changes have been incremental, i.e. more in the last generation than the one before.

Swaroop has taken one issue and systematically explained the numbers and its implication on changing demographics for lay public.

‘Muslims have grown four times more than that of the Hindus.  They got a separate country but also multiply faster in secular India.’  TBMPII, Kindle Edition.

Swaroop also comments on academic/ intellectual silence around the topic which does not allow an honest conversation on the issue, emphasizing that India’s partition happened when the Muslim population was much less than half of the total population.  Ours is a nation that has been bitten more than once, it should be wary more than many times of taking this lightly.

Towards the end, the Swaroop provides some solutions and options, as it reiterates that the book is based on 2011 census, and the present situation might be grimmer than what is available to the public now.

The book is a significant contribution, which should be studied seriously, considering how secularism is often used to shut down an honest discussion on the issue.  As stated earlier, discussion on demography should not be considered anti-minority but a concern for a faith system that is not focussed on conversions, and has been under attack from the supposed ‘secular institutions.’

Presently, the book is available only as a kindle edition, but I think it would serve its purpose better in a printed version, which would make comparing graphs and charts easier.  Regardless, the book is available on amazon for a small price, considering the enormous amount of data it analyses.  The book can be useful both for academics and non-academics.