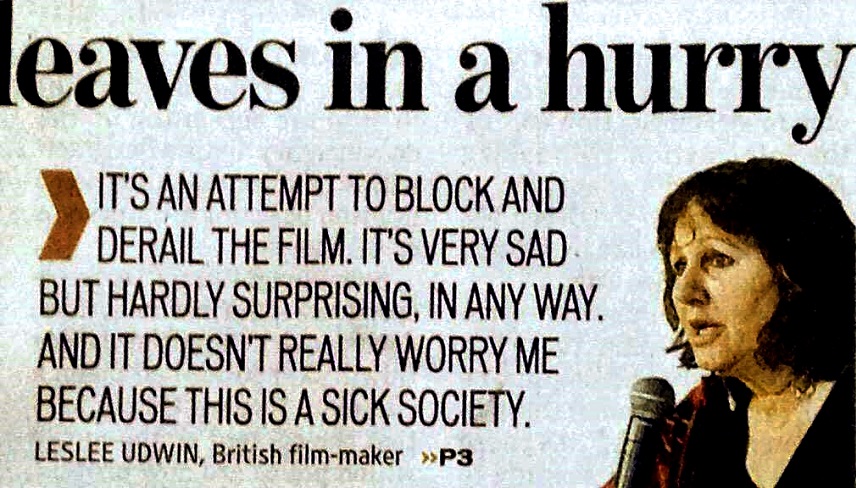 A foreigner-made documentary called “India’s Daughter” is much in the news.  What is clear is that the Government of India supported and cooperated in its production on the express understanding that the film was “being made purely for social purpose without any commercial interest”.  There is enough now in the public domain to infer strong commercial interest, including the sale by the film-maker of this film for commercial advantage.  She violated other terms of the permission too and it is fair to ask why she did so.

Leslee Udwin, director and producer of the film, says that “I began this film with a narrow focus.  `Why do men rape?’ I discovered that the disease is a lack of respect for gender. It’s not just about a few rotten apples, it’s the barrel itself that is rotten.”[1]

From the context of her film it is evident that by “rotten barrel” she means India, that is, India itself is rotten.  Such a label is entirely in consonance with other labels for India in the Western media such as “rape culture” and “rape capital of the world’.

But, first, let us look at the data.  The timeline below is merely for convenience and, if some of the numbers seem inconsistent, the sources explain them away with reasons like totals may vary because they may include more than one type of sexual victimization.

–          most injured rape, attempted rape, and sexual assault victims did not receive treatment for their injuries

–          police were contacted in regard to only 30% of the sexually assaulted children.

Note that these are officially reported numbers and that the sources themselves acknowledge significant under-reporting.[2]   These sample just the past 25 years of a much longer societal history, and it is a fair conclusion that a society with such a tradition of violence against women (and men, and men violating women and other men, and women violating men and other women) can only be a sick society, entirely deserving of labels such as “rape culture” and “rape capital of the world”.

[pullquote]From the context of her film it is evident that by “rotten barrel” she means India, that is, India itself is rotten. [/pullquote]

Leslee Udwin is absolutely right that in a society that is so diseased in lack of respect for gender, it’s not just about a few rotten apples, it’s the barrel itself that is rotten.

Except that all the data above is not about India, it is about the United States of America.

To Udwin and her kind, if India is a rotten barrel, how much more rotten then is the American barrel? Or, for that matter, the British barrel that is Udwin’s own country of residence?[3]

What actually is going on?

We need to go back a little into the politics of our history.

The missionary-colonial enterprise was to divide-and-rule India, and among their strategies was the destruction of our own educational system and the introduction of theirs that taught us – and still does – their construction of our history to demonize us brown heathens and portray White Christians as our saviours.This is an ongoing enterprise, and its new frontline crusaders are the Western mainstream media, Western and West-funded NGOs, and our co-opted desis.[4]

Look at that invitation to the US premiere of “India’s Daughter”.  Its promoters are Vital Voices Global Partnership and Plan International. The West-based Plan International works in 51 “developing countries” to promote the rights of children. Its “vision is of a world in which all children realise their full potential in societies that respect people’s rights and dignity”.  Notwithstanding even all that officially reported sexual abuse of American children as well as the officially acknowledged “historic rise” and “explosion” of child pornography in the US, Plan International sees no need to work for American children.

Vital Voices Global Partnership is a US government initiative promoted by “by then-First Lady Hillary Rodham Clinton and former Secretary of State Madeleine Albright after the United Nations Fourth World Conference on Women in Beijing to promote the advancement of women as a U.S. foreign policy goal.”

Its founder is Hillary Clinton and it has two leading American politicians as its “Honorary Chairs”. Its Board of Directors is chaired by a public relations businesswoman and includes a number of Clinton associates and sundry media and corporate honchos.

Its Global Advisory Council members from India are:

–          Ruchira Gupta, honoured by the Clinton Foundation, and founder of the India / America NGO Apne Aap whose governing body here is overwhelmingly of businesspeople;

–          Jaya Arunachalam, who had an active connection to the Congress Party and whose NGO Working Women’s Forum includes “links and affiliations” to Citibank, to a Dutch multinational banking and financial services company recently fined USD 1 billion for unscrupulous trading practices, to a Dutch company in the gambling business, and to the US-based India Development Service whose website does not specify its legal persona, its financiers and its accounts and whose work is to be concentrated in India’s tribal areas.[5]

So why are these Western corporate /American government-backed NGOs interested in promoting a film whose producer proposes that rape in India is central to our male identity?  And why did Udwin make this film, her production company aptly named Assassin Films?  As rightly has been asked, what was her motive?

“If Miss Mayo had confessed that she had come to India merely to open out and examine the drains of India, there would perhaps be little to complain about her compilation. But she declared her abominable and patently wrong conclusion with a certain amount of triumph: `the drains are India’. So that’s what it boils down to for Udwin:  motive.”[6]

Udwin self-righteously proclaims: “I will not allow them to besmirch my name and say that I made it for commercial gain. I came using my own money and I am now in personal debt for £120,000 and rising. I gave it free to NDTV, because I told myself that I would not make a penny out of the Indian version.”

Surely Udwin has very deep pockets indeed that she can afford  upwards £120,000 of her own to make this film but, all her protestations notwithstanding,  the evidence is that she didn’t do it as charity.  It is an investment, her pennies – or pounds – to be recouped from the foreign version, a version she accepts, apparently without protest, edited by the foreign media to focus on the India presented by her as a rotten barrel, just as Mayo had presented India as a drain.

Prima facie, Leslie Udwin lies about her motive, her money, and her method, and so her denial that the central villain of her film was paid for his story needs to be taken with a barrel of salt.[7]

So much for Udwin.  But she’s only the film-maker, the mukhota, and her work done, she scuttled away from India. Who are behind her, promoting the film? There is, of course, Britain and its BBC, but the trail, involving Italy, Canada and Denmark too, reportedly leads to the Ford Foundation through “a carefully constructed web of film companies whose presence fade in and out as if through the lens of a camera.”[8]

The Ford Foundation’s connect to the CIA is a matter of public record. Vital Voices is a politico-business front of the US government, explicitly intended to further US foreign policy.

It is incredibly naïve to believe that because these Westerners allow us to hug them and call them by their first names they will lose sight of their missionary-neo-colonial agenda.  “Barack” was a recent proof of that, with his hypocritical homilies to us on “secularism” and India’s progress.

The conclusion does not go far enough that “the outcry against the ban of India’s Daughter….. wants India’s poverty and social disabilities to become an excuse for imposing Western culture and commerce on the country [with] the Western media reaping commercial gains from the poverty industry.”[9]

The role of Western and West-funded NGOs in fomenting social unrest to further Western missionary-neo-colonial agendas is well-documented.[10]

It is no secret that the missionary-colonial divide-and-rule agenda for India was centred around the break-up of Hindu society and the demolition of the Hindu dharma. It first constructed caste as central to Hindu identity and initiated what today flourishes as vote-bank politics. To that it added the fostering of religious divisiveness, successfully using “secularism” to pit the monotheisms against the pluralism and, within the pluralism, to encourage dharmic panthas and sampradayas to take on characteristics of a monotheism.  Macaulayism engenders Hindu self-loathing.  Now rape is being broadcast within India and the world over as characteristic of the Indian (read, Hindu) male identity.[11]

There’s more, but suffice it to say that wherever these missionary-colonials conquered, they erased the meaningful survival of any pre-existing belief system, and their successors openly declare their unfinished agenda for India.[12]

All this is not for a moment to exculpate rape in India but, if Westerners are sincere about “challenging the social norms that perpetuate violence against women around the world”, they must first tell us, in what they call the “developing countries”, why they have failed to eradicate violence against women in their own world, that they call the First World.  And failed they have.

The US acknowledges itself – and is acknowledged by our Macaulayans – as No.1, the world’s only superpower, the world’s most advanced country, and more. Consider that the US has had about 240 years over which to create a society that is free of violence against women – and has failed.  Why?  Consider whether there is a direct link between their sexual mores and their sexual violence, and whether the American social paradigm itself is inherently violent.[13]

[pullquote]It is no secret that the missionary-colonial divide-and-rule agenda for India was centred around the break-up of Hindu society and the demolition of the Hindu dharma. [/pullquote]

Not until they – or, better, we – make “America’s Daughter” (and, for that matter, “Britain’s Daughter”) will India’s daughters and sons and mothers and fathers and Mother India and the Indian State understand the Western politics of rape in “rotten barrels” and determine how most effectively to deal with it.

It is an American who, identifying the characteristics of rape-prone and rape-free societies, classified America as a rape-prone society.  We in India need to re-educate ourselves in those traditions of rape-free societies that, yes, we do have in our own civilization, and to build on them to evolve our own solutions. Blindly imitating the failed American way is a remedy worse than the disease, and we ape it at our peril.[14]