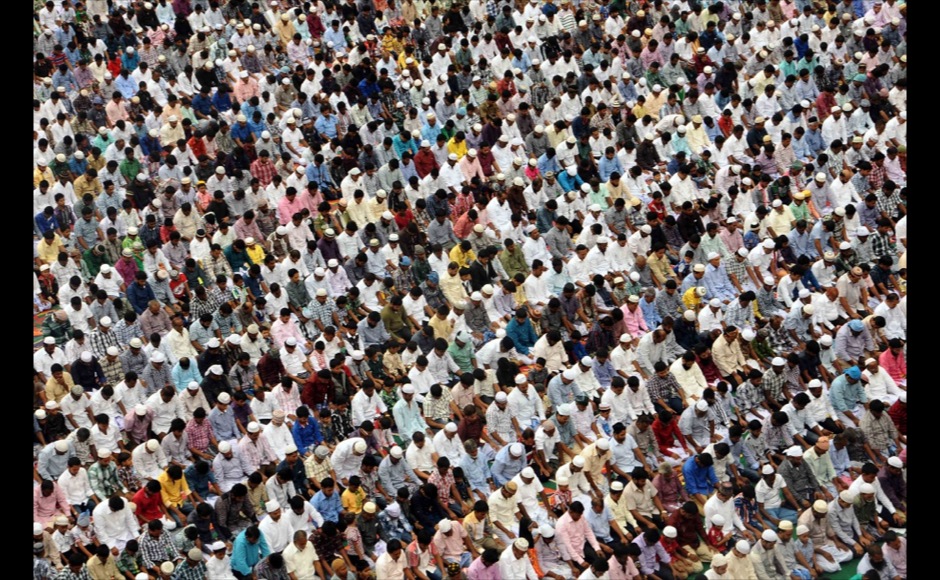 The recently released data of religious census is an eye opener for many. While Hindus have first time been enumerated below 80%, Muslims have registered the highest growth rate in the last decade with 24.6%.

This trend is consistent from the Independence and many factors have contributed to it. The decadal decline of Hindus is 0.7%, while that of Muslims is 0.8% on the positive side. The Muslim growth rate is consistently higher than the national average. The growth rate is alarmingly higher in specific states namely, Assam, PashchimBanga, Kerala, etc.

The long-awaited religious data of Census 2011 largely confirms what had already become known from the leaked information that has been in the public domain for several months.

Briefly, the Muslims have increased their share in the population of the India by 0.8%; Christian share in the country as a whole has remained unchanged, but they have gained substantially in the North-East, especially in Arunachal Pradesh, and in several pockets of high Christian influence in central and southern Bharata; the share of Bharatiya Religionists, including Hindus, Buddhists, Sikhs and Jains, has correspondingly declined.

Share of Other Religions and Persuasions (ORPs), who belong mainly to various Janjati religions, has marginally increased from 0.65 to 0.66%. The share of those who have not stated their religion has increased from 0.07% to 0.24%; in all, 28.6 lakh Bharatiya have chosen not to state their religion in 2011, while in 2001 there were only 7.3 lakh Bharatiya in this category.

Since some decline in the number of Bharatiya religionists and a corresponding rise in the number of Muslims from decade to decade has become the norm, it is easy to conclude from the data that things are absolutely normal and that no serious change is taking place in the religious profile of the Bharatiya population. This has been the reaction of many journalists and commentators.

But that has been the way of the mainstream Bharatiya demographers; they insist on closing their eyes to the obvious decline of Hindus, Sikhs, Jains and Buddhists and the glaring rise of Muslims in general and of Christians in particular pockets of Bharata. And to divert attention from the elephant in the room, they keep drawing attention to irrelevant and extraneous issues.

An Increase of 0.8% in Muslim Share is Not Small

The increase of 0.8% in Muslim share has been generally seen as a small, normal increase. The number does seem small in itself. But this increase in the share of Muslims and a corresponding decline in the Bharatiya religionists is not a one-time phenomenon. It has been happening continuously from decade to decade since the beginning of the census period.

Cumulatively, in the period since Partition, the share of Bharatiya Religionists in the population of Bharata has declined by about 4% and that of Muslims has increased by the same amount. This level of change is not small by any standards.

The Gap Between Muslim and Hindu Growth Remains High

Between 2001 and 2011, Muslims have grown by 24.6% and the Hindus by 16.8%. Sikhs, Jains and Buddhists have registered a much lower growth. The Muslim growth is 46% above that of Hindus and 39% above the national average. This gap is very large. 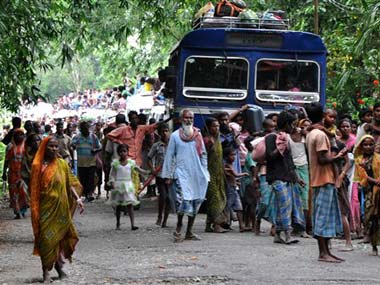 The decennial growth of Muslims and Hindus in the State during 2001-2011 has been 21.8 and 10.8%, respectively. Christians have also registered a significant growth of 27.8%. It would be interesting to look at the changes in the relative shares of the two communities in the districts that have a dominant presence of Muslims.

Uttarakhand: Muslim proportion in Uttarakhand has risen from 11.9 to 13.9%. The decennial growth of Hindus in this State has been 16%, compared to 39% of the Muslims and 40% of the Christians.

Adjoining Districts of Uttar Pradesh: Several districts of Uttar Pradesh neighbouring Haridwar and Udham Singh Nagar of Uttarakhand, including Saharanpur, Muzaffarnagar, Bijnor, Moradabad, Rampur, JyotibaPhule Nagar and Meerut have recorded extraordinary Muslim growth as in the previous decades. This region is on its way to becoming Muslim-majority; Rampur already has a Muslim share of 51% in 2011.

In the newly created Mewat district, Muslims now form 79% of the population. In the taluk of Nuh in this region, the proportion of Muslims has gone up from 71 to 77%, in Tawdu, it has gone up from 49 to 57% and in Hathin, from 54 to 59%. This is very high growth indeed.

We have not yet been able to look at other areas of high Muslim growth, especially in the chicken neck area covering several districts of Bihar, Jharkhand and West Bengal.

From the above analysis it is clear that though the increase of 0.8 percentage point in all of Bharata share of Muslims seems small and ‘normal’, it has implied substantial change in the religious demography of many parts of the country.

There is considerable difference in the growth of Muslims and others even in the less obvious States like Punjab, Jammu and Kashmir, Himachal Pradesh, etc.

Christians have continued to increase in various pockets. According to all-India figures, Christians have grown somewhat slower than the national average.

Between 2001 and 2011, they have recorded a decennial growth of 15.5%, compared to 16.8% of the Hindus and 17.7% of the total population. The share of Christians in the population of the country has remained nearly unchanged at 2.3%. But they have recorded substantial increase in specific pockets of the country, while their proportion has declined in States like Kerala, Goa and Andhra Pradesh. Below, we list some of the States where Christians have made deeper inroads in the last decade:

Unlike several other States of Northeast, Arunachal Pradesh had remained outside the Christian reach until 1971. In 1971, they formed just 0.79% of the population; their share increased to 4.3% in 1981, 10.3% in 1991, to 18.7% in 2001 and now it has reached 30.3%. Many districts of Arunachal Pradesh have now become Christian majority. They form 75% of the population in Tirap district now; several tribal communities in the State have been nearly fully converted to Christianity.

Meghalaya: In Meghalaya, the proportion of Christians has risen from 70.2% in 2001 to 74.6% now. This is another State where those tribal communities that had remained outside the fold of Christianity are being converted in large numbers from decade to decade. In 1991, the proportion of Christians in the State was 64.6%; it was 52.6% in 1981 and only 35.2% in 1961. The State now seems to be on the way to getting fully Christianised in the manner of Nagaland and Mizoram.

[pullquote]This is a significant rise and indicates that like Arunachal Pradesh, Sikkim may also be on the way to rapid Christianisation.[/pullquote]

Manipur: In Manipur, Christians have shown a surprising rise in their share from 37.3% in 2001 to 41.3% in 2011. The Christian share here in 1971 was 26% and it was less than 20% in 1961. The Christian presence in Manipur is limited to the hill districts, while the valley remains largely Hindu. Even then the share of Christians has been rising from decade to decade.

Tripura: Tripura did not have much Christian presence till recently. Their share rose from 1.7 to 3.2% between 1991 and 2001 and has now gone up to 4.4%. Their presence in the State still remains limited, but it is rising.

Sikkim: Like Tripura, Sikkim also had little Christian presence till 1971, when their share in the population was counted at 0.79%. Their share began growing after that; it rose to 2.2% in 1981, 3.3% in 1991 and 6.7% in 2001. In 2011, 9.9% of the population of the State has been counted as Christian. This is a significant rise and indicates that like Arunachal Pradesh, Sikkim may also be on the way to rapid Christianisation.

Besides the northeast, there are pockets of high Christian presence in Tamil Nadu, Orissa and in the central Bharatiya States. Christians have registered significant increases in their proportion in Kanyakumari district of Tamil Nadu, where they are on way to acquiring a majority.

In Odisha, their share in Gajapati, Kandhmal and Rayagada districts has increased considerably. Gajapati is now 38% Christian. Their presence in the older pocket of Christian influence in Sundargarhin in the north of the State has remained nearly unchanged at around 18 to 19%. Christian share has grown marginally in Jharkhand and has remained unchanged in Chhattisgarh and Madhya Pradesh.

It shall be of great interest to relate the numbers of different communities with other socio-economic parameters like literacy, work-participation rates, etc.

The 2001 Census had for the first time provided such detailed information on the basis of religion. That information gave us many insights. For example, we learnt that Muslim female literacy in at least 9 larger States of Bharata, including Gujarat, Madhya Pradesh, Chhattisgarh, Jharkhand, Odisha, Andhra Pradesh, Tamil Nadu, Karnataka and Maharashtra was higher than that of Bharatiya Religionists.

In many of these States, the difference between the female literacy of Muslims and Bharatiya Religionists was of more than 10 percentage points in favour of the Muslims.

This clearly contradicts the pet theory of the secular-liberal demographers that the higher growth rates of Muslims are merely a reflection of their relative poverty and illiteracy. The data provided by the Census of 2001 and the Sachar Committee does not seem to have encouraged the demographers to revisit their theories and prejudices; yet it would be useful to get similar religion-wise socio-economic data for the Census 2011.

Given the critical importance of the religious demography for understanding the changing social, political and geographical balance within Bharata, the Census should consider making the religion data part of the Primary Census Abstracts, so that these numbers become available up to the town and village level and can be correlated with various other socio-economic aspects of the population.

Making religion data part of the PCA would also take away the various compulsions that sometimes lead to unnecessary delays and speculation about these figures.

(This was first published in the Organizer)