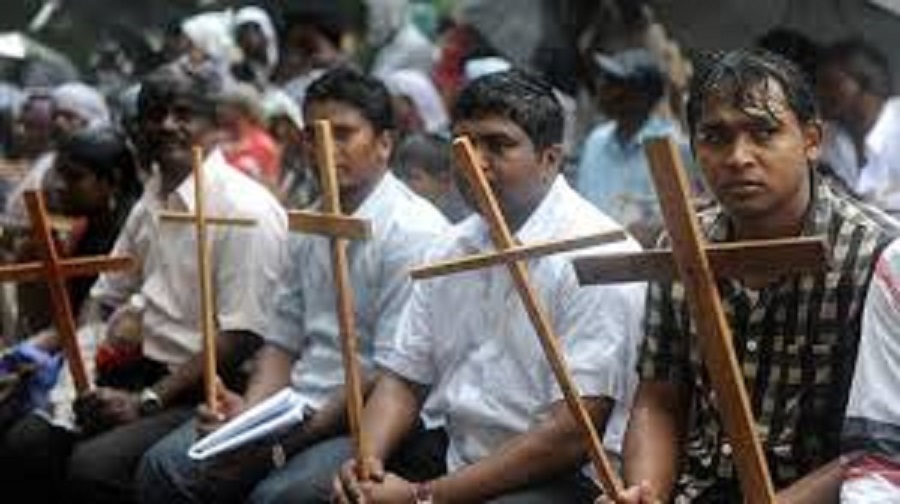 Tony Joseph’s specious arguments in this piece merit a thorough response. He has structured his arguments by claiming a rebuttal of four claims, so we will go through them in the same sequence and attempt to examine why those claims indeed hold true. The reader is advised to read both this and Mr. Joseph’s piece side-by-side.

He opens with the assertion that Christianity has applied itself to the task of conversion and proselytisation for two millennia. Nothing could be farther from the truth.

Christian populations have been scientifically attested to appear in Indian populations no earlier than the 6th Century. Claims of the Christ’s Apostle Thomas arriving in Kerala and converting locals have been so comprehensively debunked and so frequently that we would need to place this claim on no more serious footing than Jesus’s supposed sojourn in Kashmir.

Conversion drives have been sporadic and insufficient in intensity for much of Christianity’s encounter with India. One would point to the Portuguese interventions in India as the first example. However, their methods were the same as those used in South America, and in India, China and Japan, up against a sizable population with resistance to germs, knowledge of weaponry and the social and political structures to mount a forceful armed resistance.

It was not the merit of philosophical argument that reversed and halted Portuguese, French and Dutch incursions into India, but various feat of arms, such as the Battle of Colachel. Subsequent conversion efforts under the British were initially subdued and gained in intensity only during the years of direct rule by the British Crown. In these years, from 1858 onwards, the aggression was not military in nature, but more subversionist. One can only point to the rise of the Dravidian movement in pre-1947 years to understand the nature of this subversion.

Tony cites official census figures to quote a share of population of less than 5%. However, it is well-known that many new converts do not officially change religion for various reasons – to retain reservation benefits provided by the Government, to avoid societal friction and so on. However, various evangelical organizations have quite frequently cited much higher figures.

The burgeoning crowds seen every Sunday at various Christian shrines are more than sufficient proof for that. One may also see the rising numbers of new Christian seminaries and theological colleges that are seed-funded by FCRA money. These three Twitter threads reproduced here give anecdotal evidence of new Christian colleges:

Luther New Theological College, Dehradun run by the Bharat Susamachar Samiti (India Good News Society). The Asian Christian Academy schools in Bengaluru. These educational institutions are run for the sole purpose of producing graduates who will act as missionaries, in effect, producing conversion engines which will eventually become self-sustaining.

Tony claims, truly that the share of Hindus in the populations of London and the UK have grown much faster than that of Christians in India. But, it is to be noted that, except in rare cases, Hindus in London or UK are legal immigrants from the original homeland of Hindus, the sub-continent, or their descendants. They have neither replaced the native population, as in the Christian conquest of the Americas and Australasia, nor converted them, as in Africa and Europe. As a respondent to this article explained, one can look at the four possible routes of demographic change:

The demographic changes in Europe are caused primarily due to these reasons:

However, demographic change in India, for Christian populations, is almost exclusively driven by conversion. Next, one must not only look at demographic data, but also geographic. It is an established fact that Hindus have lost civilizational space quite rapidly since the middle of the 18th Century. This would mean regions of the world where Hindus have a share of the population and where there is Hindu participation in governance, as a group, rather than as individuals. One can only point to Afghanistan, Pakistan, Bangladesh as marked examples of this loss of space.

Next, Tony Joseph points to the marked rise in agnosticism, atheism and alternative spirituality in the majority Christian countries of Europe and the Americas. While this may appear to be true on the face of it, one must point out that even the most militant of atheists continue to be Judeo-Christian in the ethics and cultural outlook, rather than Pagan. One needs to look no further than the prominent New Atheists such as the late Christopher Hitchens or Richard Dawkins as evident proofs of this fact.

In popular imagination, the United States alone looms large in the list of Christian nations that send money to India. A quick glance at this publication from the Ministry of Home Affairs of the Indian Government shows that UK and Germany sent Rs. 1200 crores and Rs. 1000 crores respectively, in the year 2011. Many of the donors themselves receive special privileges from their respective Governments, against which one notes little resistance.

Religions of Indic origin do not proselytise or convert

While we find this section orthogonal to the argument at hand, we will still take this up for the sake of completeness.

Tony Joseph points to the spread of Buddhism as an example of conversion. This is an argument that holds some weight considering the historical record of missionary activity on the part of the two major heterodox Dharmic systems – the Bauddha and Jaina.

However, neither of these two systems ever required anything more than acceptance of their ethical and metaphysical assertions. In the same manner as older Indic systems, people could continue with their cultural and religious faiths and practices, with just a re-classification and assimilation into the new world-view.

One needs to look no further than to see how common pagan gods and goddesses of fertility, rain, forests and wind were merely incorporated into a common worship system. This is true syncretism.

Anyone that points to Christian evangelical leaders building churches on hills and conducting ‘pournami giri-valams’, ‘Mary Mata Pongal’ and other such seeming syncretic practices must be pointed to Christianity’s long history of acculturation and assimilation to retain cultural constructs that are useful for the spread of their ideology for a few generations and suppress them later.

Thus, the efforts of the Bauddha, Jaina and various Vedantic systems were no more than ethical and metaphysical. None of them require their adherents or new converts to forswear, whole-scale, prior thought-systems in any way.

In short, Buddha, Shankara or Ramanuja did not place a requirement that there was no God but theirs. Shankara, for example, left the Shanmata system much as he found it, and only is supposed to have contributed to it in the form of poetic contributions.

Sanskritisation and Hinduisation are but continuations of the same anthropological phenomena that have been in vogue for millennia, from the Iron Age expansions into peninsular India to today’s tribals adopting many of the customs of their savarna neighbours. These must be viewed distinctly from the (relatively) very recent shuddhi programs, which are for the first time, instituted for the sole purpose of reclaiming converts away from the parent faith.

Even more far-fetched is Tony’s argument that such religious leaders as Sri Sri Ravi Shankar are faith leaders of the proselytizing category. None of the leaders he mentions attempts anything more than to provide self-help to people on a large scale and hardly attempt to make people leave the faith they were born into. One might stretch this one of Tony Joseph’s arguments to call Dale Carnegie a missionary of the Church Of Winning Friends.

This shows that organizations that explicitly declare themselves as Christian received Rs. 3274 crores in the year 2011-2012, while Hindu organizations received Rs. 183 crores. This is out of a total of Rs. 10651 crores. Hardly a picture of parity.

Now, it is not sufficient to take the declarations of intent at face value. If organizations declare themselves as non-denominational, it would make sense to get an idea of who their donors are, in order to understand the agenda of the organizations. For this purpose, the world-cloud in this blog post is most instructive. On the other hand, Tony Joseph points to fantastic accounts of the wealth in Indian temples, such as the Padmanabhaswamy temple in Thiruvananthapuram or the Tirupati temple. One must remember that this wealth is not in the control of Hindus themselves, for the purpose of reinforcing their faith, but in the hands of a secular Government, to dispose of as the rulers see fit. Contrast this with the wealth of Indian Churches, which remains firmly in the hands of the Churches themselves, and the Christian community.

Mr. Joseph does not rebut this particular claim at all, since this has been the open agenda of any major Christian denomination–to spread into unclaimed areas, and claim it for Christ.

He merely repeats that since previous efforts have not been very successful, current efforts should be ignored. This, again, is a specious argument that will not stand the test of logic.

To ignore an open civilizational challenge is no more than a death wish. It is not something that any practicing Hindu would wish for. It is but human nature to see one’s faith and cultural practices propagated beyond one’s life and to ignore attempts to thwart this desire is to go against human nature itself.

In summary, without going into Tony Joseph’s own motivation for writing this particular piece, once finds that his arguments against the four major assertions he claims to have rebutted do not hold true. These four claims are indeed true: