Is Congress batting for Pakistan’s interest? 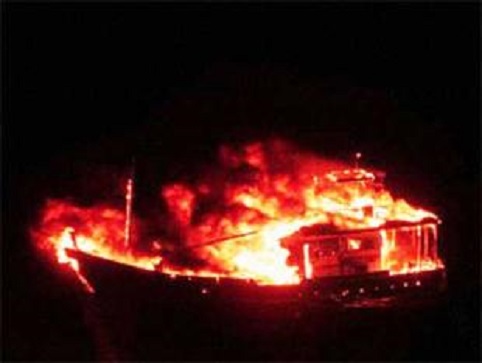 The alacrity with which the Congress has tried to corner the government over the Pakistani boat incident speaks volumes about not just the grand old party’s intellectual bankruptcy but also its proclivity to downplay the jihadist threat.

Evidently, the GOP made a fool of itself by doubting a potential terrorist attack. “Government should come clean on it. There is no evidence… How can you say that a terrorist attack was prevented? How did they [government] come to the conclusion that it was a terrorist boat? It is very strange. Nothing has been explained. Which terrorist organization was behind it?” asked party spokesperson Ajoy Kumar. To buttress his assertion, he cited media reports which questioned the government version.

But fact is that in its initial statement the government didn’t say that the boat was used by terrorists; the Ministry of Defence press release just mentioned a “suspect fishing boat.” The release said, “As per the intelligence inputs received on 31st December, a fishing boat from Keti Bunder near Karachi was planning some illicit transaction in Arabian Sea.” In other words, the Congress challenged an assertion that the government never made.

The reason is not difficult to find: the GOP under Sonia Gandhi and her son does not consider the jihadist menace serious enough to be much worried about. Five years ago, Rahul Gandhi felt that the “the bigger threat [to India] may be the growth of radicalized Hindu groups, which create religious tensions and political confrontations with the Muslim community.” This was part of a cable by U.S. Ambassador to India Timothy Roemer which was released by Wikileaks in December 2010. The August 3, 2009, cable recorded Roemer’s observations from a “candid conversation” he had with Rahul Gandhi at a dinner hosted by Prime Minister Manmohan Singh for the visiting Secretary of State Hillary Clinton two weeks earlier.

That the US envoy was not making up a story becomes evident from the cavalier attitude of the Congress-led United Progressive Alliance government towards jihadist terror. Sonia made a dandy responsible for internal security; he was more interested in changing dress than in tackling jihadist violence. The circus that Sonia surrounded herself with, including those from the so-called National Advisory Council, comprised the characters who were sympathetic towards Islamism. All, of course, in the name of secularism. This was also the reason that the UPA regime never acted firmly against jihad.

[pullquote]The GOP under Sonia Gandhi and her son does not consider the jihadist menace serious enough to be much worried about. Five years ago, Rahul Gandhi felt that the “the bigger threat [to India] may be the growth of radicalized Hindu groups, which create religious tensions and political confrontations with the Muslim community.” [/pullquote]

Now, too, it is behaving a manner which can only delight terrorists and their bosses in Pakistan. Apart from boosting its claim that it does not export terror, the Congress spokesman’s statement is also likely to demoralize security forces. Again, this is not something new for the GOP. From V.K. Krishna Menon during the Nehru era to Digvijay Sing during UPA rule, the party has been doing it continually.

While the Congress reaction seems to be result of foolhardiness, the way its friendly activists react to action against terror, be it Maoist or jihadist, smacks of a plan to malign, discredit, and weaken any drive against traitors. They adopt a variety of techniques—from peddling the ‘root-cause theory’ to raising the bogeyman of human rights violation. Even in the most clear cases, as in the Batla House shootout, they use the smoke-and-mirror shenanigans to claim that the encounter was fake.

In the present instant, too, the Coast Guard action could have remained shrouded in suspicion if the reckless remarks made by Congress leaders had gone unanswered. Defence Minister Manohar Parrikar has done well to refute the claims that the Pakistani fishing boat was used for smuggling. “The most important factor for classifying them as suspected or probable terrorists is they committed suicide, ‘harakiri’. Even [a] normal boat with drugs would throw them away and surrender unless they are motivated to do it,” he said.

Further, the Defence Minister pointed out that the “route taken is not normal fishing route and the area is not a fishing area. Even smugglers take a busy route to pass of as a fishing boat.” Besides, smugglers are not in touch with Pakistani maritime security agencies or their Army officers, he added.

These facts are obviously ignored by the Congress; the party seems determined to oppose anything for the heck of it—even if it demoralizes or demeans our security forces. Signs of atrophy?