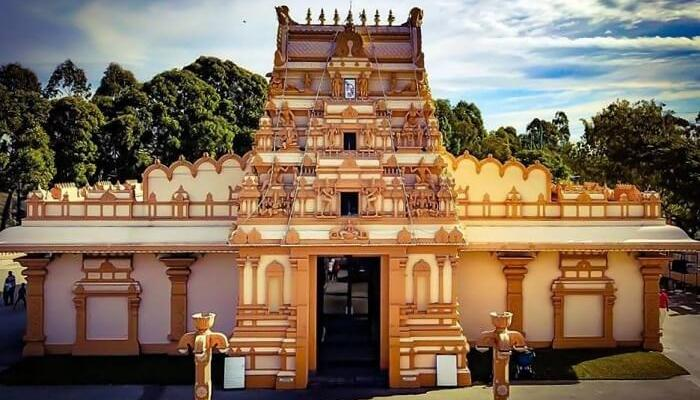 ‘Hinduphobia’ – a globalised conspiracy against Hindus has not spared Australia regardless of the presence of prosperous and law-abiding 700,000-strong Hindu diaspora. Recently, Hindus were angered and perturbed by the attacks on Hindu symbols, disinformation campaigns against Hindu organisations,  and attempts to label Hindus as extremists. In early 2022, the Hindu Council of Australia, an apex body of Hindus in Australia, sought to raise funds to publish a systematic study on Hinduphobia in Australia by hiring an Australian academic scholar. Before this, Australian Hindus had filed a petition in the parliament to recognise “Hinduphobia” as a legitimate form of bias and prejudice, in line with Islamophobia, in Australian society against Hindus. The petition demanded a ban on the use of any terminology that included the terms such as Hindu, Hindutva or Hinduism in relation to radicalization, religious extremism, or supremacism in the absence of evidence.

Historically “Hinduphobia” existed in early Australia too, in an entirely different form. More than a hundred years ago, Alfred Deakin, the founding father of “White Australia”, rejected the inclusion of a  small number of “Hindu” others in the Commonwealth of Australia due to the colonial perception of Hindu race, colour, and culture as inferior. Deakin visited India in 1890 and published “Temple and Tomb in India,” where he described Hindus as childlike and wished to convert them to Christianity (1).

The phenomenon of contemporary Hinduphobia is visible from 2012 onwards with the rise in popularity of Narendra Modi and the success of the Bharatiya Janata Party in elections, both state and national. Subsequent disinformation campaigns against Hinduism as “Hinduphobia” took a new shape in Western countries, including in Australia. Hence, from nearly a decade ago, the narrative of Indians as third-world migrants has taken a back seat. With the new political orientation in 2014, Australian media and academia, along with their Western counterparts, started producing antagonistic narratives about India in general and Hindus in particular. Suddenly Indian democracy, India’s ruling party and its leaders, and mainstream Hindu organisations and institutions were painted as a threat to humanity, and words such as fascist, nationalist, extremist, minority abusers, and Hindu fundamentalism became part of their regular lexicon vilifying India and Hindus. It is a verifiable fact that Western media and academia, including those in Australia, in their discourse have not stood up for India whatever be the cause. On the contrary, disinformation and inverse realities are propagated on issues vital for India’s sovereignty, security, wellbeing, and progress. The choice of vocabulary and tone is carefully crafted to take a stance against India, which were evident while covering issues related to Kashmir, Article 370, the Citizenship Amendment Act, the so-called “Farmers’ protests”, rioting by Muslims in Delhi, Hindu genocide, Hindu persecution, fraud committed by Western NGOs in India, the Covid-19 crisis and response, and so on. Not only every action and statement by the government were second-guessed, but they were done so, unfailingly negatively.

“Hinduphobia” is probably a wrong expression to use as no one fears Hindus or Hindu ideology; rather, it is “Hindudvesha” (the hatred toward Hindus and Hinduism) that drives the acts of hate against Hindu identity. “Hindudvesha” is accusatory rhetoric that treats Hindus as objects or patients to be examined and diagnosed. “Hindudvesha” presupposes and concludes that something about Hindus and Hinduism is irredeemably bad or wrong, evil and demonic, and hence needs to be attacked, destroyed, demonized, or dismantled.

(edited excerpts from the Hindu University of America)

“Dismantling Global Hindutva” was one such “Hindudveshi” conference held in September 2021 with the global support of over 900 academics, several western and international NGOs, and so-called community organisations. Australian academics and institutions had a fair share in endorsing such a conference.

The false projections, imaginations, and binaries on Hinduism in Western countries can be traced back to James Mill, the 19th-century historian and political theorist of Britain. The hegemonic text “The History of British India,” published in 1818, was strategically constructed with the intent of disenfranchising Hindus in India. Interestingly, James Mill had never visited India nor knew any Indian languages. Yet, his distortive work influenced the British to change the education policy and methods of revenue collection, and significantly altered Hindu society. The book was a must-read for British administrators and civil servants for nearly a century. Mill’s scholarship was well promoted by the University of London, Cambridge and Oxford University. Hence the default paradigm of Hinduism in Australia too is established by the “received knowledge” of the hard labour of thousands of colonial scholars influenced by James Mill. The Western ecosystem does not want to displace the “received colonial knowledge” with new post-colonial knowledge, and the real facts on the ground.

Hinduphobia in Australia:  Media and Institutions

Karl Marx favoured British colonialism for all his blather about workers, equal rights, and so on. No wonder then that the Left-Marxist ideologues continue in their plotting of dismantling Hindu Dharma. Islamists are ideologically in conflict with Hindu image worshippers, and the Western intellectual framework is hugely invested in Hinduphobic ideas through James Mill’s legacy. The nexus between Marxists, Islamists, and orthodox Christian organisations surfaces cohesively against the Hindu ecosystem in Australia in the garb of human rights and demands to act against “Hindu extremism” – a manufactured bogeyman. Their calibrated agenda selectively against Hindus is achieved through their slick networking capabilities. Recently, Prime Ministers Narendra Modi and Scott Morrison sealed a trade deal between India and Australia. Accusing the Indian High Commissioner of interference and denying academic freedom, eighteen academics from the “Australia-India Institute” resigned immediately after the trade deal (2).

The “Australia-India institute” was formed by the Australian Government in 2008 with a vision to develop a better understanding between India and Australia and hence forge a relationship between the two countries. On the contrary, until recently, the institute’s website showcased the Western obsession with the “caste system” and women’s rights in India, making the institute nothing more than a James Mill progeny obsessed with carrying the “white man’s burden,” and assuming a moral superiority over the “heathen”. No wonder then the trade deal was not in their interests.

Very recently, Tejasvi Surya, a Member of Parliament from Bengaluru, was invited to Australia to participate in the “Australia-India Youth Dialogue”. Jumping into action and collaborating in their plan to oppose Surya’s presence in Australia we found that journalists, Islamists, and Marxists campaigned to ban his entry into Australia. The young visiting politician was portrayed as a threat to multiculturalism in Australia. “The Humanism project” (an NGO), along with various Islamic organisations, staged physical and social media protests to ban his entry. They labeled Tejasvi a hate monger, and “The Age” and “The Guardian” generously reserved space for articles and commentaries supporting the ban.

The Australian Institute of International affairs (AIIA) claims to help Australians learn more about international affairs. Dr Nisha Thaliyal of New Castle University, who endorsed the “Dismantling Global Hindutva Conference” last year was given a platform to spew her hate against Tejasvi and oppose his visit to Australia. Imagine an academic like Thapliyal accusing any other international, democratically elected leader as a misogynist, an Islamophobe, and an ultranationalist with no facts or doctored facts being presented to support such claims!

The good news is that most Australian politicians are not influenced by the views of the so-called “Indian experts” who are disciples of James Mill, Karl Marx, or endorsers of Islamists. Unfortunately, it is not the case with the public-funded broadcaster like the Australian Broadcasting Corporation which is busy publishing trash and carrying out disinformation campaigns against Hindus while painting Indian Muslims and Indian Christians as victims of Hindu aggression. There are hundreds of articles about India with a resemblance to James Mill’s book that can be accessed with a simple Google search. In an article published as recently as May 2022, ABC’s investigative journalists found problems in Anthony Albanese and Scott Morrison (the incoming and outgoing Prime Minister respectively) wearing Hindu OUM scarves. Such poorly researched “reports” by mediocre and ill-informed Australian journalists, go on to label Hindus as “Muslim and Christian killers,” “xenophobic,” and “ultranationalists” with either recycled garbage or no facts presented.

Vishal Jood was a young Indian migrant who had recently arrived in Australia. In December 2020, when a group of Sikh separatists trampled on the Indian flag and raised pro-Khalistan slogans, Jood snatched the flag and unfurled it. An altercation that followed is misrepresented by a specific section of leftist ethnic media. The narrative created was that Sikhs were victims of rising Hindu extremism in Australia. Though Jood was acquitted of most of the charges, he spent six months in jail before being deported to India. Alex Hawke, the then Immigration Minister of Australia tweeted implying Jood was causing community disharmony in Australia. What is now famously known as the “Vishal Jood case” exposed how vulnerable the Hindu community in Australia is in the losing battle of the narrative war against them.

In another instance, we have seen that a community organization, claiming to fight for human rights, is also part of a coalition targeting Hindus. The Australian Alliance Against Hate and Violence (AAAHAV), along with its ideologues, have worked with Australian Green, a political party, to manufacture the claim about the rising threat of “Hindu extremism”. AAAHAV consists of not-for-profit organisations like Hindus for Human Rights (a misleading name), Turban 4 Sikhs (propagates Sikh identity), a federation of Islamic Councils in Australia, Pax Christi Australia (an orthodox Christian organisation), The Humanism Project (a Marxist NGO which endorsed the “Dismantling Hindutva” conference), and Basmala Australia (a confluence of “Islamic Researchers Organisations of Australia”). The membership and funding of the above organisations are deeply suspect, given their political agendas, their willingness to lie and obfuscate, and their ties to violent ideologues and ideologies. Yet, these Hinduphobic voices are eagerly sought out and given platforms to spew their lies and hatred by the media. David Shoebridge, a Green parliamentarian in a parliament committee meeting accused the Vishwa Hindu Parishad Australia of being an “extremist organization” banned by the CIA, which is a lie. He advocated a ban on Hindu teachings in schools and held Hindu organisations responsible for fights between Indian communities in Australia.  He was condemned though by most politicians in parliament for his misleading outbursts.

There is a dire need for creating some safe space for Hindus in what is a quickly developing Hinduphobic Australia to ensure that not only can Hindus counter such attacks but show ordinary Australians what they are being told and sold. Marxists, Islamists, and Christian organisations have solid institutional and media support (simply because both academia and media are now stocked with these Hinduphobes), and they join forces if required against Hindu assertiveness. The Hindu community is relatively new and considerably small in Australia and lacks institutional support to counter mainstream media manufactured Hinduphobia. There is a vast gap between Hindu discourse in academia and media with the reality and the experience of Hindus and Hinduism in Australia.

It is time for Hindus in Australia to understand and respond to the threats facing them.

Disclaimer: The opinions expressed in this article are the personal opinions of the author. IndiaFacts does not assume any responsibility or liability for the accuracy of any information in this article.
Author Bio: Shashi Holla is a health professional in Australia.

Shashi Holla is a health professional in Australia