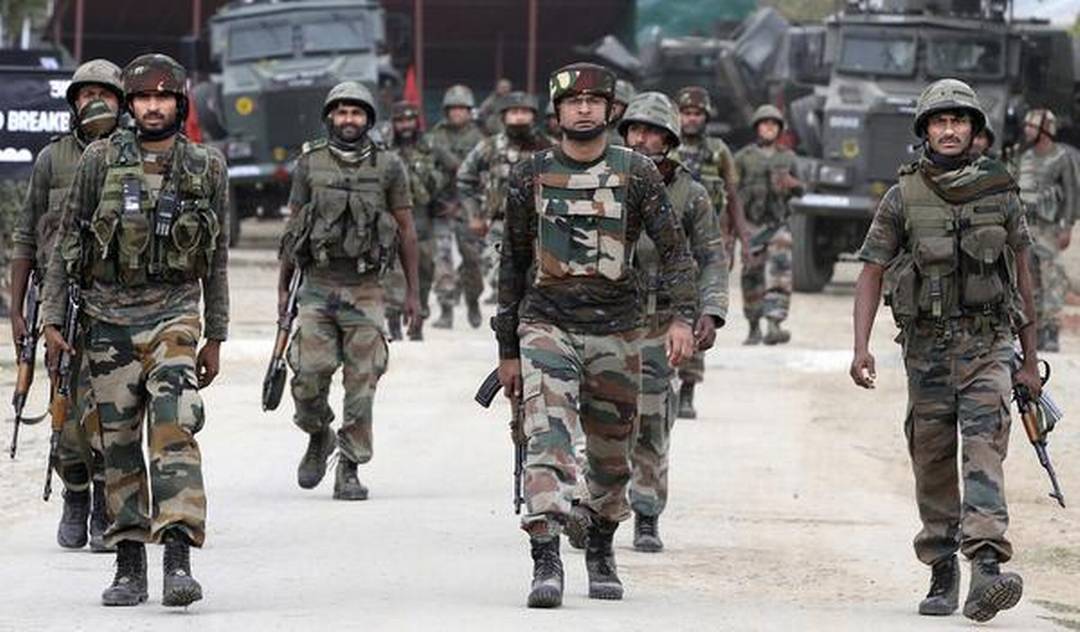 India’s military reinforcements in Kashmir over the past week resulted in a lot of scaremongering regarding the consequences of revoking Article 370. This highly controversial law – which conferred unconstitutional privileges to Kashmir while discriminating against the rest of the country – should have been struck down by the Supreme Court decades ago. Instead, most Indians went on with their lives without questioning the discriminatory nature of the law just like they stoically agreed to the illegal Partition of the country in 1947. Ignorance of the nature of the problem and fear of turmoil were the reasons for this ostrich like behaviour.

This fear was reinforced by India’s leftists, seculars and Macaulayites – a class of people who appear Indian but are conditioned by their English education to be deferential to the West. This is because at some atavistic level they are cowards. Raised on a diet of inferiority, they are not only petrified of reclaiming national pride but will try and dissuade other Indians from having pride in India’s history, achievements and military power. Members of these groups such as Rajdeep Sardesai, Shekhar Gupta and Barkha Dutt were the ones who were shouting from the rooftops that Narendra Modi and Amit Shah were about to open the gates of hell.

The media indulged in all sorts of fear mongering:

*The US will condemn and sanction India, and our economy will nosedive.

*Pakistani hordes will come pouring through the mountain passes into Kashmir and spark a full blown war between the two nuclear armed neighbours?

*Kashmiris will unleash the mother of all terrorist movements that will cause civil war in India?

Here’s what really happened – nationwide celebrations. As for sanctions and condemnations, that’s a joke. There isn’t one decent country in the world that cares a rat’s tail about Kashmir. Even if due to old colonial habits or a desire to grandstand some care enough to want to meddle in India’s internal affairs, they won’t because India is too big and powerful. The days of trade sanctions and diplomatic demarches are over – nobody talks down to India. This is not Jawaharlal Nehru’s doormat nation, but a Modified India which defends its interests fiercely, and with deadly force if required. Nobody knows this better than Pakistan – its economy went into free fall after 12 IAF warplanes bombed Balakot on February 27.

The Kashmir episode highlights how over a period of several decades the media successfully created decision making paralysis in successive governments. Editors and senior journalists (after a briefing from their urban naxal professor, political master or handler in a foreign embassy) would rush to press, saying how Kashmir must be allowed to secede from India because there is no other solution to the ongoing conflict.

Because the Macaulayites in India’s English language media are conditioned by their English education to be deferential to the Whites, they talk and write about Indian matters with a Western outlook. So Kashmir must be allowed to become independent because the gora says so. According to these people, if Cambridge University and The Guardian newspaper state that the Indian Army is conducting genocide in Kashmiris, then it must be true.

However, the Modi government doesn’t play by their rules. Instead, by refusing to entertain these glorified typists, it has made the Breaking India group irrelevant.

Where did the media’s inferiority complex come from? Let’s take a detour to the 1948 war in Kashmir.

In October 1948, with thousands of Pakistani intruders indulging in mass rapes and slaughter of Kashmiris as the Pakistanis advanced towards Srinagar, which lay just 9 km away, Prime Minister Nehru kept arguing against deploying the Indian Army to salvage the situation.

In the words of late Field Marshal Sam Manekshaw, who was then the Director of Military Operations in the Army HQ: “As usual Nehru talked about the United Nations, Russia, Africa, God almighty, everybody, until (Home Minister) Sardar Patel lost his temper. He said, ‘Jawaharlal, do you want Kashmir, or do you want to give it away’. He (Nehru) said,’ Of course, I want Kashmir. Then he (Patel) said ‘Please give your orders’. And before he could say anything Sardar Patel turned to me and said, ‘You have got your orders’.”

The reason for such prevarication was that Nehru deferred to his British gurus in every aspect of politics, even in matters where the British had no locus standi or where they should have kept their traps shut. His chief guru was of course Governor General Louis Mountbatten, but Nehru also accepted the advice given by the three service chiefs – all British – while brushing aside the opinion from Indian generals and leaders. Since the British officers, including Mountbatten, were feeding him misinformation, this led to serious consequences for India, including the loss of large parts of Kashmir as well as Gilgit and Baltistan. (And we’re not counting Balochistan and Sindh, which is another story).

As Rajnikant Puranik writes in Foundations of Misery: “It didn’t seem illegal to Mountbatten and Nehru that the raiders backed by the Pakistani Army should invade J&K, which had not signed any Instrument of Accession in Pakistan’s favour; but it seemed illegal to them to send the Indian Army help to save people getting looted, raped and butchered!”

With Nehru setting the trend of Indian leaders behaving in an obsequious manner before the West, his Lutyens Delhi followers – including British era bureaucrats, Congress politicians and especially the opportunistic media – also had no qualms behaving slavishly before all sorts of foreigners, including Westerners, Chinese and even the totally lacking in class Pakistanis.

What happened after India’s nuclear tests in Pokhran in May 1998 should serve as a reality check. For longer than most people care to remember, the chief argument by the cabal of leftists, liberals, seculars and the Lutyens media against India going overtly nuclear was: “What will the world say?” This deference to the world – read West – was ingrained among the Macaulayites who populate the media.

Plus, there was the inevitable scare tactic. An incident from 1998 illustrates the type of fear psychosis that many old school journalists suffered from. I had just started as a journalist with a leading business weekly and was the most junior journalist at the magazine. When the news of the atomic tests broke on the evening of May 11, I was overjoyed and let out loud whoops and did a bhangra routine in the newsroom. Incredibly, I was the only one celebrating in a newsroom of around 50 people.

Hearing my noisy celebrations, one of the senior editors came out of his cabin and said with a pained expression on his very long face: “What’s there to celebrate? There will be sanctions. Once Western sanctions kick in, the Indian economy will come crashing down; there will be shortages of everything from fuel to food.”

Like a petulant fool, he clutched his head with both hands and walked around like a madman, “Oh god, what has Vajpayee done, it’s all over, the economic miracle is finished.”

Basically the editor implied India would be back in the Stone Age. His reaction was typical of newsrooms everywhere in the Lutyens media.

Back then too, the impact of nuclear tests was blown out of proportion. But according to leading economist and author S. Gurumurthy, Pokhran II instead of tanking the economy actually fired it up.

Gurumurthy explains in his book, ‘India’s Time Has Come’ – “National defeatism was reversed by one event, a non-economic, even anti-economic event, the Pokhran atomic explosion. Even the author of Pokhran, Atal Behari Vajpayee, might not have foreseen its effect. The sound of the bomb revived Indian civilisation, which had been in an intensive care unit for centuries. This stunned the West, the US in particular. The countries of the West respect not the good, but the strong. That is why they respect a bloodstained China. In India, the Pokhran bomb exploded physically in Rajasthan, but psychologically in North Block, on the Finance Ministry, whose officials panicked. But soon the nation began to find its feet. The India Development Bonds issued to bolster the forex position were oversubscribed by NRIs. Pokhran made them shed their shame in associating with India, which had been a failed civilisation to them till then.”

India is no longer a poor Third World nation. New Delhi now offers aid to as many as 68 countries. The reason Pakistani Prime Minister Imran Khan begs Donald Trump to act as an interlocutor on Kashmir is because India is so far ahead of Pakistan as a military and economy power that the Pakistan Army has lost all hope of defeating India militarily. In a couple of decades, if the economy chugs along at its current pace, India will have living standards similar to Eastern Europe’s. And some time by the middle of this century India could be the world’s top economy.

As India reclaims its top spot in the comity of nations, the people are changing too. Indians today are a more confident bunch and have tremendous pride in the country’s achievements. Unfortunately, the Macaulayites and large sections of the leftist secular media do not share this vision. This is the reason why to a large extent they have become marginalised and irrelevant because most of India doesn’t buy their views, let alone pay for their products. That is exactly what needs to be done. Indians should stop buying newspapers like the Times of India, Indian Express, The Hindu, The Telegraph, Malayalam Manorama (a Kerala church rag) and also stop visiting their websites and that of NDTV, The Print and many others that are against the very idea of India.

Only mass boycott of these media outlets will knock some sense into the owners of these newspapers to give the presstitutes the boot and hire professional journalists in their place.