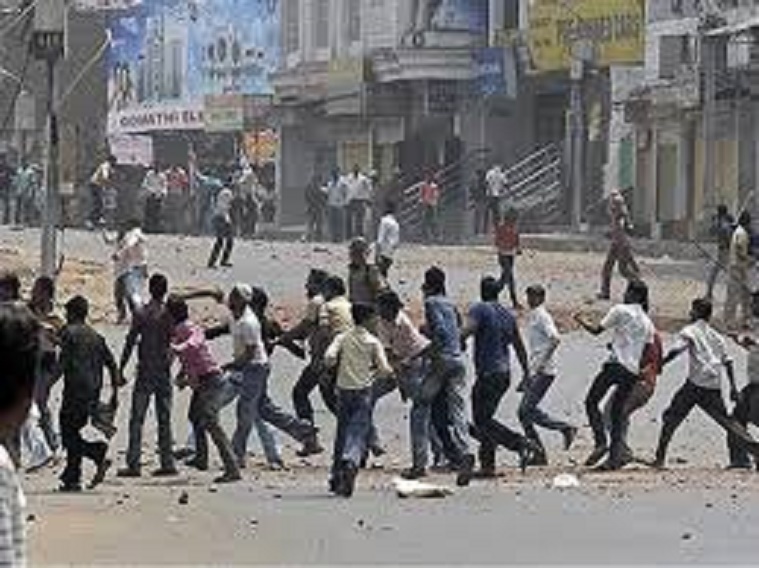 When was the last time you read or heard in the mainstream media that in many parts of India Hindus are attacked by Muslims with impunity? Do you know that entire villages in West Bengal and Kerala are burned down by Muslim mobs on a routine basis?

If you think I’m trying to ignite passions by so directly naming different communities without mincing words, do have a look at this article recently published in the New York Times, written by Sonia Falerio, daughter of a former Congress Minister. Neither the newspaper nor the author of this article refrain from naming the aggressive community and the victim community. Here is a glimpse:

These killings should be seen as the canary in the coal mine: Secular voices are being censored and others will follow.

While there have always been episodic attacks on free speech in India, this time feels different. The harassment is front-page news, but the government refuses to acknowledge it. Indeed, Prime Minister Narendra Modi’s silence is being interpreted by many people as tacit approval, given that the attacks have gained momentum since he took office in 2014 and are linked to Hindutva groups whose far-right ideology he shares.

Earlier this month, a leader of the Sri Ram Sene, a Hindu extremist group with a history of violence including raiding pubs and beating women they find inside, ratcheted up the tensions. He warned that writers who insulted Hindu gods were in danger of having their tongues sliced off. For those who don’t support the ultimate goal of these extremists — a Hindu nation — Mr. Modi’s silence is ominous.

But what’s the problem you may ask? In an ideal world there shouldn’t be any problem in a journalist pointing fingers at a particular community for the transgressions against another community. In fact, this should be the job of journalists and writers – to reveal the true face of the society and reveal it in such a manner that it shakes people’s conscience. Nothing wrong in that.

Unfortunately, we don’t live in an ideal world. Just reverse the situation. Let there be a Muslim aggressor (the media will never name the community but use the stock phrase ‘from a particular community’) and a Hindu victim.

Let there be a Christian aggressor and the Hindu victim. Or let there be a transgression in a Muslim-majority country like Bangladesh and the victim be a liberal or a secular. The tone suddenly changes.

The language becomes soft and hazy. Excuses are made.  Hindu aggression is amplified and Muslim aggression is soft-pedalled by clever play of words. For example, whereas the attacks on rationalists and liberals is an ominous development, in Bangladesh (a Muslim-majority country)…

The murders in India share striking similarities with the killings of four Bangladeshi bloggers this year. But while there was a global outcry over what happened in Bangladesh, India is hiding behind its patina of legitimacy granted by being the world’s largest democracy.

There is a “global outcry” when such attacks happen in Bangladesh, but in India there is a tacit approval. The writer uses the expression “hiding behind its patina of legitimacy granted by being the world’s largest democracy” – it is still to be discovered that who in his or her right mind endorses secularists and rationalists being killed by Hindu extremists and how Indian democracy is to be blamed for the attacks.

The media conveniently sidestepped the news that last May in this very Bangladesh, a 3000-strong mob attacked a village simply because two Hindu boys had allegedly posted something derogatory about Prophet Muhammad.

When Narendra Modi and party were in the fray a class of secularists were screaming from the rooftops that India being a pluralistic, secular country, he will never be able to come to power and in case he came to power, some of them would leave the country.

One of the journalists quoted in the same New York Times article, even declared that he would run naked on the streets of Mumbai if Narendra Modi were to become the PM of India; such is the inveterate hatred they nurture for Narendra Modi.

Well, he became the PM, but none of these secularists left the country or graced the streets of Mumbai with their Full Monty act. It needs courage to carry out what you claim and none of these liberals and secularists actually have the courage to stand by their own words.

The bogey of the Gujarat 2002 riots (in which around 300 Hindus and 700 Muslims died) was used prior to 2014 which, to the great disappointment of these secularists and “pluralists” didn’t yield the desired results.

After the 2014 election results, the Loch-Ness monster of the Gujarat riots keeps raising its head infrequently. But just in case, the phony narrative of the “rising attacks on secularists, rationalists and liberals” are continuously raked up to tell the entire world in what a precarious situation the intellectuals live in the new regime. Whether it’s the Muslims or the liberals and rationalists in the otherwise “extremist” Hindu nation, things are really messy and if this government goes on like this, a big disaster awaits.

So what about the unprovoked and regular attacks on Hindus?  According to this Swarajya article,

It’s not just in Syria or Nigeria that non-Muslim girls are being raped and converted by ISIS and Boko Haram. Nor is it just in Bangladesh or Pakistan that Hindus are living as second class citizens. In village after village, as the population of Muslims is increasing steeply, Hindus are being forced to flee; their lands are being taken over, their homes are being burnt, their festival processions are being attacked, and their women are being raped mercilessly. The stage is set for a second partition of Bengal and in fact, there is already a demand for “Greater Bangladesh”.

You will never find such incidents being talked about in publications like the New York Times or Washington Post. The very same writers and intellectuals who are constantly writing about the attacks on the minorities and the rationalists will never write a word about Hindu victims in India wherever Muslims are in majority.

There was a widespread killing and raping of Hindus in Kashmir in the late 80s and early 90s. Within a span of a few weeks at least 300 Kashmiri Pandits – men women and children – were mercilessly slaughtered. Hindu temples were destroyed. Kashmiri Pandits were forced to become refugees in their own home. They had to flee from the land where their ancestors had been living for at least 5000 years. This is the worst kind of ethnic cleansing in contemporary times but since it happened to the wrong community, it doesn’t generate much interest neither among the intellectuals nor among international human rights organisations.

Will you find any of these secularists writing something about this biggest mass exodus of modern times? No. Google is at your disposal. Go ahead. Try to find at least one article by any mainstream secular, liberal journalist, author or intellectual lamenting the treatment meted out to Kashmiri Pandits.

In Assam, Muslims from the neighbouring Bangladesh are being illegally settled to alter the demography for political gains. Hindu villages are constantly attacked. Hindu women are kidnapped and forcibly married to Muslim men as a matter of routine. The government isn’t bothered. Liberals and secularists look the other way because talking about these incidents doesn’t suit their agenda of constantly keeping the majority Hindu population on the backfoot.

Just recently, a Hindu truck driver was lynched and killed by a Muslim mob just because he was passing through a Muslim-dominated area and he blared the horn of his truck. Did you find this incident being discussed in the newspapers? Did any of these secularists decry the increasing intolerance among Muslims and the secular fabric of the country being tarnished? Of course not.

The birthplace of Adi Shankaracharya has been totally converted into a Muslim-majority area in such a manner that Hindus are not even allowed to visit the temple over there and cows are massacred routinely in front of the Sasatha temple. Does secularism come under threat? No.

A Muslim father in UP just killed his 4-year-old daughter because she refused to cover her head. Are you going to come across an article in The New York Times or Washington Post decrying this dastardly act by a father driven by religious derangement? Never.

A Hindu boy was dragged out of his house in Delhi by a drunken Muslim group of boys because he had protested against them creating a ruckus in front of his house. Will you read in your usual newspapers that the drunken boys were Muslims and the victim was a Hindu? No.

Besides, according to these journalists, attacks by Muslims and Christians always have a reason and they are mostly a reaction to some present or a century-old Hindu  misdemeanor. The attacks by Hindus on the other hand are totally unprovoked and driven by a virulent majoritarian tendency.

As for attacks on rationalists and secularists, these shouldn’t happen if they are happening. The government must take strict action. No matter what these secularists and rationalists do, we are a proud democracy and in a democracy, everybody has a right to think the way he or she thinks, even if his or her thinking is offensive. The culprits must be brought to book.

Now about this perpetual cry about Muslims constantly being targeted in India for being Muslims. They should go through the numbers before making wild claims.

According to a report by Death Penalty Research Project of the National Law University, Delhi, since 1947, 72 Muslims have been hanged in India compared to 1342 Hindus and others. In West Pakistan, there were 14 per cent  Hindus in 1941 and now they remain just little less than two per cent and according to the Pakistani census data, between 1941 and 1951 there was a drop of a whopping 13 per cent.

Whereas in India, the percentage of Muslim population has increased. Despite committing criminal acts, Muslim film actors have a crazy fan following among a mostly Hindu audience. Muslim areas and ghettos exist in every major city, town and remote village across the country. Non-Muslim people are scared to even enter these areas. The mainstream journalists, writers and intellectuals never express worry about these trends.

Don’t be selective because then it reeks of hypocrisy and intellectual insincerity. This applies every bit to Sonia Falerio as well.