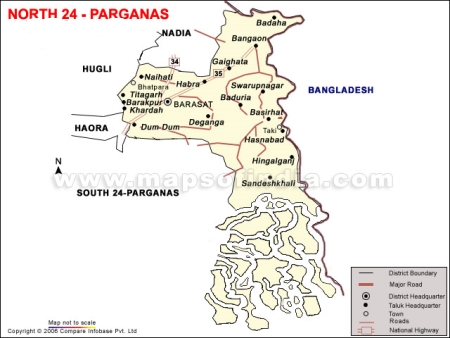 This ground report was sent by an IndiaFacts reader.

The North 24 Paraganas district has become a safe haven for smugglers and criminals of all hues. It appears that their writ runs here, and it runs with impunity thanks to their unholy nexus with political leaders and police officials.

It is pertinent to recall the recent arrest of the infamous smuggler Abdul Barik Biswas with 42 kg of illegal gold by central agencies. No criminal case was ever filed against him by the district police because of his powerful nexus with the Mamata Banerjee-led Trinamool Congress.

In yet another gruesome incident, RPF jawan Nirmal Ghosh was killed on 15 May by Bangladeshi cow smugglers with no response from the local administration or the police. Nirmal Ghose hailed from the Angrail village, which has become a nice haven for Bangladeshi cow smugglers who indulge in illegal cattle trafficking though the village. Needless, the local police officials have nothing to check this. Several of these officers are in cahoots with these cow smugglers. Repeated complains by the local people to police has failed to yield any action.

Tapan Ghosh, the head of Hindu Sahmati, an organization that fights against the severe and multi-pronged existential threat posed to Hindus in Benga visisted the house of Nirmal Ghosh on 24 May and heard firsthand the complaints of these villagers about the nexus between Bangladeshi cow smugglers, police and political leaders.

He addressed a public meeting and spoke out forcefully against this nexus. It didn’t take long for the smugglers to hit back.

Ghosh’s public meeting attracted a big crowd, with villagers from Angarpukuria and surrounding areas attending the meeting. When they were returning after the meeting, they had to pass through Paikpara, a Muslim-dominated area. As soon as the returnees entered Paikpara, about 200-250 Muslims, armed with lethal weapons, pounced on them. They destroyed two vehicles (a 207 Matador and a Magic van). Drivers of those two vehicles, Anup Barui & Vijay Barui were severely beaten. The attackers did not even spare the women, who were mercilessly thrashed.

Police reached the place after the attackers were done with the attack and behaved as if they were the employees of the cow smugglers and started threatening the victims. They have arrested 3 Hindus: Swapan Goldar, Bikash Biswas and Susanto Biswas whereas not a single attacker has been caught so far.

The media of course has remained mum on the issue, suppressing this news. The Mamata Banerjee administration too has turned a blind eye.

What you can do:

At the minimum, you can repeatedly call the police officers so that the arrested Hindus are not tortured in Bangaon police station, and are let off with honour and dignity. You can also politely request the police to apprehend the hooligans responsible for this unprovoked attack. The relevant phone numbers are given below: