Dear New York Times: Look into your own backyard first 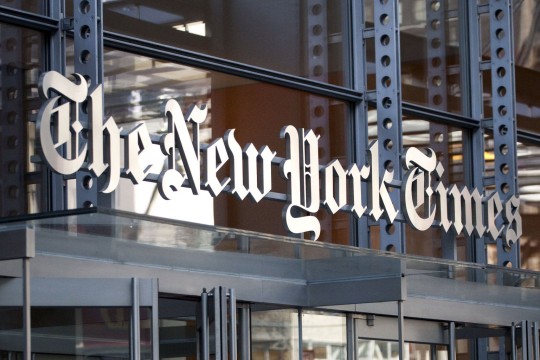 On 8 October, the New York Times published what can only be called a motivated piece declaring that the BJP government will use education to promote the ideology of Hindutva. Like most cases, this piece is a classic example of calling the fire brigade when not even a speck of smoke is visible. Sample this:

In its 2014 Election Manifesto, Mr. Modi’s party, the Bharatiya Janata Party, called education “the most powerful tool for the advancement of the nation and the most potent weapon to fight poverty.” The question now is whether educational reform will be used not just to create an educated citizenry and trained work force but also to promote a particular ideology.

While campaigning ahead of the May election, Mr. Modi, then the chief minister of the state of Gujarat, promised to bring the “Gujarat model” to national governance. Many voters understood this to mean a commitment to a more dynamic economy. But the Gujarat model has a less attractive side to it: a requirement that the state’s curriculum include several textbooks written by Dinanath Batra….

I hoped that the esteemed NYT would have realized that the Gujarat Model was indeed based on an effective mode of governance, which included the education sector:

Thus, the BJP’s claim of education being “the most powerful tool for the advancement of the nation and the most potent weapon to fight poverty’ is not as empty as the NYT wants us to think. As for Dinanath Batra, his antics have been criticized by several academicians whom the partisan sections of Indian media (possible sources of NYT) label as Hindutvawadis.

The NYT piece ends stating that:

The education of youth is too important to the country’s future to allow it to be hijacked by ideology that trumps historical facts, arbitrarily decides which cultural practices are Indian, and creates dangerous notions of India’s place alongside its neighbors.

Again no credible source material has been cited by those concerned in the NYT to show that Indian minds are at the risk of being radicalized. Since they mention ‘India’s place alongside its neighbors’ I recommend the esteemed NYT editorial writer to have a look at these two detailed studies done on Pakistani textbooks. Some excerpts:

By now the NYT must have realized too, like the US establishment, how much of a painful burden Pakistan has become. And so, maybe it’s time they take the responsibility for reforming their textbooks.

Strangely, the NYT is repeating the partisan claim of Indian Leftists who alleged the BJP government in 1999 of trying to amend the objectives of the Indian Council of Historical Research (ICHR) from attempting a “rational” rendering of historical research to “national” using misleading terms like ‘saffronisation.’ The allegation was later revealed to be nonsense, as even the original memorandum of the ICHR carried “national” and not “rational”. Yet there was no correction or apology from the Left.

On the charge of saffronisation let us read the major extracts from Murli Manohar Joshi’s ‘Reorienting Education’ speech:

The existing syllabi were reviewed and some additions to supplement them were suggested. Vedic mathematics was introduced as a technique for quick computation…Its introduction acquainted the students with the capacity of Indian seers to discover such a unique system in what has been hitherto understood as an exclusive domain of western scientists and also provided a sense of respect for India’s ancient wisdom and heritage.

The sixteen aphorisms of Vedic mathematics are not related to any ritual, they have been termed Vedic because the seer who discovered them did so in the same manner in which the Vedic sages perceived the Vedic rishis. In a sense its introduction could motivate the students to think about the holistic approach of ancient Rishis and compare it with the reductionist approach of the Newtonian science. It may be recalled that the work of scientists like David Bohm, Bell, Capra and others have pointed out the limitations of the Cartesian approach and have pointed out that in many respects the eastern holistic approach provides a deeper understanding of the universe………

…..The vast literature of Kalidasa, Bhavabhuti, Magh and others along with the Indian contributions to the field of technology, chemistry, astronomy, horticulture and agriculture cannot be appreciated without knowing Sanskrit. The moment a student comes to know about the rich Indian heritage in these fields a sense of self-confidence is generated in his own capacities.

But it is exactly this self-confidence that for reasons best known to them, the Indian left and many in the West do not wish Indians to possess—hence their fondness for raising false alarms.Because the NYT arrogates to itself the right to dole out advice and criticism to India, India too, can arrogate the same right to itself. Interesting results will ensue when that is done. As a sample, let’s see what this 26 January edition of Slate report about American school system says:

A large, publicly funded charter school system in Texas is teaching creationism to its students……Creationist teachers don’t even need to be sneaky about it—the Texas state science education standards, as well as recent laws in Louisiana and Tennessee, permit public school teachers to teach “alternatives” to evolution. Meanwhile, in Florida, Indiana, Ohio, Arizona, Washington, D.C., and elsewhere, taxpayer money is funding creationist private schools through state tuition voucher or scholarship programs…..If you live in any of these states, there’s a good chance your tax money is helping to convince some hapless students that evolution (the basis of all modern biological science, supported by everything we know about geology, genetics, paleontology, and other fields) is some sort of highly contested scientific hypothesis as credible as “God did it.”…….

So dear NYT, instead of needlessly giving education tips to India, I suggest you ensure that kids in America get proper schooling. Whatever the drawbacks of Indian education system, the kids here are not taught that the world was created in six days. In other words, dear NYT, by not looking into your backyard, you are indirectly contributing to the creation of a generation of American adults who will literally believe that the Earth is six thousand years old and dinosaur fossils to be Satan’s creation.