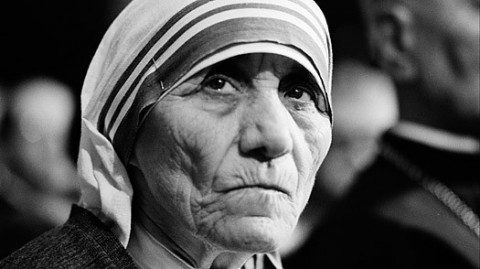 (This piece was sent by IndiaFacts supporter and contributor, Shwetank Bhushan Singh.)

Recipient of the Nobel Peace Prize, feted by politicians, the Church and the world’s media, Mother Teresa was born in what was called Yugoslavia/Bosnia in 1910.

Born to Albanian parents, she was at that time known as Agnes Gonxha Bojaxhiu. Mother Teresa came from a very rich family  – at least by the standards of her native Skopje, Macedonia. Her parents were so well-off that there was a local saying “as generous as the Bojaxhius.” Agnes was cultured and well-educated: She wrote poetry and played the mandolin. Her family took in orphans and she tagged along as her mother went out to tend to the destitute.

My Own painting, when I didn’t know the truth

The perception of Mother Teresa as a saint still endures in popular public consciousness.

Perhaps even you believe she lifted millions of poor people around the world out of poverty. But sadly upon objective examination, the Mother Teresa portrayed by the media and popularized in our culture is glorified and almost deified. Most people will find this hard to believe. All this because the media has painted this lovely picture of a caring mother who dedicated her life to charity.

The labor for which she became renowned began on January 6, 1929 when she emigrated to Kolkata, India to become a nun at age 18, but worked as a teacher for another 17 years before receiving a series of startling visions and verbal communications from Jesus. The experience, wrote her confessor at the time, was “continual, deep and violent.”

She later recalled it as a dramatic dialogue between her and Jesus. Jesus calls her “my little one” and demands that she “carry Me into the holes of the poor. I want Indian nuns, who would be my fire of love among the poor, the sick, the dying and the little children.” She hesitates. He asks impatiently, “Is your generosity gone cold?” It had not. After two years spent convincing her local bishop, she was released from her previous vows and founded her Missionaries of Charity.

It seems a bit exaggerated. But Teresa redefined the concept of “working with the poor” in the modern age. For poor she substituted “poorest of the poor,” a new category with a corresponding morality.  She understood the word “with” as obliterating the line between benefactor and beneficiary, plunging her nuns deeply into the world of the slums.

As for “working,” Teresa was  an organizational genius, or call her a marketing Guru. Billions know about her compassion. But what is not so well known is her leadership skills, evident in the multiplication of what she did to other parts of the planet. Teresa instinctively leveraged her growing renown, cultivating a United Nations of world leaders and donors and paving the way for the Missionaries. Four decades after her solo start in India, her order was in over 100 countries, making her one of the church’s truly great founders. “If there are poor on the moon, we will go there, too,” she joked – sort of.

In Calcutta she developed institutions – schools for poor children, homes for pregnant homeless women, orphans and lepers, and hostels for the dying – that became a template for her ministries the world over. Hemele Gonzalez, one of Mother Teresa’s volunteers of her ‘Home for the Dying’ called it the concentration camps. “No chairs, just stretcher beds. There were no medical care or pain killers beyond aspirin and the refusal to take a 15 year old boy to the hospital”. “I was shocked to see the negligence. Needles were washed in cold waters and reused and expired medicines were given to the inmates.  Bear in mind that Mother Teresa’s global income is more than enough to outfit several first class clinics in Bengal. The decision not to do so is a deliberate one. The point is not the honest relief of suffering, but the promulgation of the cult based on death and suffering and subjection.”

It amuses me ever so much that the outrage (often by Christian theologians and religious fundamentalists) is directed at the supposed belief that Teresa, because of her presumably religious disposition, is above scrutiny and above criticism, just as religion is apparently claimed to be so. In this piece “Mommie Dearest“, the late Christopher Hitchens tears down the curtain of rhetoric and nonsense and shows the truth behind the matter, shows the reality of who Teresa was and how she came to do what she did.

Hitchens’ work is available for years and has since been ridiculed by the Roman Catholic Church. Christian religious fundamentalists upset that they didn’t find the ammunition to counter him, resort to attacks, straw man arguments, and rhetorical fallacies all the while refusing to accept, or in fact respond to the facts presented before them. For them, Christianity should never be questioned, and their saints never thought ill of no matter how heinous they might have been.

To know the reality of Agnes Gonxha Bojaxhiu, one must read Christopher Hitchens’ damning expose, The Missionary Position: Mother Teresa in Theory and Practice. Those who have no time to read this investigative masterpiece, should at least give an ear to this small clip reported by the master himself.

She spent her life opposing the only known cure for poverty, which is the empowerment of women. And she was a friend to the worst of the rich, taking blood money from the atrocious Duvalier family in Haiti (whose rule she praised in return). Where did that money, and all the other donations, go? The primitive hospice in Calcutta was as run down when she died as it always had been. She preferred California clinics when she got sick herself and her order always refused to publish any audit.

Remember Charles Keating? An investment fraud artist, he was the chairman of the Lincoln Savings and Loan Association, which was the target of a federal investigation after the 1989 savings and loans collapse, which wiped out $160 billion in savings. Many of those affected were ordinary Americans, mostly retirees.

Mother Teresa was a good friend of the great thief Keating. Keating it was discovered, had given more than US$1.25 million to Teresa and flew her around in his jet. She took this money to build homes and hospitals for the poor. There is absolutely no evidence that Teresa built modern hospitals and homes for the poor and elderly with Keating’s dirty money. This is a letter in which Teresa wrote to Judge Lance Ito pleading clemency for her friend Keating, but Keating was thrown in jail as he was found guilty.

One of the characters in her inner circle was Jim Towey, who became her legal counsel in the late 1980s. In February 2002, President George W. Bush violated both the letter and the spirit of the American constitution by setting up the Office of Faith-Based and Community Initiatives to further the cause of fundamentalist churches and religious conversions. Towey was appointed director of this office.

Not only that, she was anti-reformist too. Teresa was a faithful servant of the Vatican. During the deliberations over the Second Vatican Council, under the stewardship of Pope John XXIII, Teresa was at the forefront in opposing all suggestions of reform. Her position was ultra-reactionary and fundamentalist even in orthodox Catholic terms. In fact, while receiving the Nobel Peace Prize she told a dumbfounded audience that abortion and contraceptives is “the greatest destroyer of peace.”

Before she died, Teresa had opened over 600 missions in 123 countries. Some of these missions have been described as “homes for the dying” by visiting doctors. The doctors observed a significant lack of hygiene, even unfit conditions, as well as a shortage of actual care, inadequate food and no painkillers. ”There is something beautiful in seeing the poor accept their lot, to suffer it like Christ’s passion. The world gains much from their suffering,” was her reply to criticism, cites Hitchens.

When she died in September 1997, she was the director of worldwide missions organization known as the “Missionaries of Charity”. A year after her death, the pope nominated Teresa for beatification, the first step towards sainthood. However, by doing this the pope violated a Vatican tradition that allowed a cooling off period of five years to guard against dubious characters. The church freely admits that saints are saints before it recognizes them, and many Catholics fervently believe Teresa is one. So do others. She’s not a saint yet – not even officially recognized by her own Roman Catholicism.

Whatever he Vatican thinks of her, or whatever the truth of her sainthood be—which she is not—there is definitely one undeniable truth: “Mother “ Teresa was certainly no friend of the poor.

Further reading : A study from the Université de Montréal