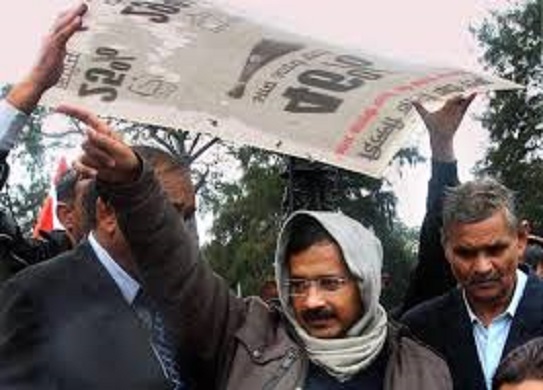 Edward Murrow gave us the renowned quote ‘A nation of sheep will beget a government of wolves’, which underscores what often goes wrong in a democracy which we perceive to be a ‘Government of the people , for the people by the people.’ Hence we are often told that if a country/city/state suffers from socio-economic aberrations, the fault in a way lies with the public who used their democratic right in a haphazard manner, thus bringing in an inefficient Government. Going by today’s Delhi election results, Mr. Murrow’s quote is quite apt.

[pullquote]On the other hand, Delhi elected BJP on all the seven seats in the LS polls, but instead of striking the iron while it was hot—that is, declaring polls right after winning the Lok Sabha, the BJP delayed the assembly polls possibly hoping for the AAP to collapse on its own.[/pullquote]

Two years ago when Aam Aadmi Party (AAP) was elected to power, the reason given by the bulk of the populace who supported AAP was that Kejriwal looked like a proper alternative to the corrupt and dynastic Congress as well as the ‘communally fascist’ BJP. Most of those voters were those individuals not invested in parties and hence preferred voting for what they thought was an alternative. The BJP even with Narendra Modi as their PM candidate could not manage to obtain that space from AAP. By the time of Lok Sabha polls AAP’s footprint had expanded to Punjab. The mainstream media whose anti-BJP bias is well-known, fully backed AAP.

On winning power Mr. Kejriwal and his party men decided to take the people for a ride by promising unrealistic subsidies and freebies and coupling it up with unnecessary public drama. But it seemed that said drama could only work for forty-nine days after which the AAP relinquished power and put Delhi under President’s rule. Suddenly Mr. Kejriwal and his colleagues who were presenting themselves as alternatives to corruption and communalism instead became ugly clones of the Congress Party with more zeal and questionable credentials. It appeared nifty in avoiding uncomfortable queries like its top leaders sympathizing with the Naxal agenda, or about its senior leader Prashant Bhushan behaving like a spokesman of the Kashmiri separatists and Kejriwal meeting a rabid Islamist leader who issued a fatwa to murder Taslima Nasreen.

During the Lok Sabha polls Mr. Kejriwal chose to contest elections from Varanasi challenging the then PM candidate of the BJP, Narendra Modi. To garner national support, AAP shook hands with rabid Islamists, violent Naxalites as well as Kashmiri separatists while treating Delhi as their fiefdom.

[pullquote]On winning power Mr. Kejriwal and his party men decided to take the people for a ride by promising unrealistic subsidies and freebies and coupling it up with unnecessary public drama[/pullquote]

At that time many “experts” in the media and self-proclaimed political analysts were puzzled as to why Mr. Kejriwal chose Varanasi over Delhi, to which he curtly replied ‘Who should we save, Delhi or the country?’ On 16 May both Delhi and nation showed they did not feel the need to be rescued by Mr. Kejriwal. But that did not stop AAP from continuing its drama which became their trademark. Now going by Mr. Kejriwal’s ‘Who should we save logic,’ I expected him to field someone else to be the CM candidate for Delhi while he could continue his crusade to rescue the nation.  But Mr. Kejriwal realized it is better to have a base to rule than to embark on an unnecessary journey and thus he declared himself as the CM candidate once again.

Now in spite of the fact that AAP witnessed a huge downfall between December 2013 and May 2014, the media and many anti-BJP ‘experts’ constantly projected AAP as an alternative. On the other hand, Delhi elected BJP on all the seven seats in the LS polls, but instead of striking the iron while it was hot—that is, declaring polls right after winning the Lok Sabha, the BJP delayed the assembly polls possibly hoping for the AAP to collapse on its own.

The AAP utilized this period to regroup and then started a spirited door to door campaign. The state unit of BJP was not even remotely active, which, coupled with the presence of corrupt BJP members in the municipal corporations in Delhi, made the BJP unappealing to the public. Equally, the BJP didn’t mount any serious attack against controversial sources funding AAP.

But what surprises me is the Delhite public’s willing ignorance of some of Kejriwal’s stated positions: promising to make life difficult for e-Commerce groups, his silence on the presence of Naxal sympathizers in his party, his unrealistic populist promises which can very well bankrupt Delhi. It is also astonishing how quickly the “bhagoda” tag that cast Kejriwal into extended and deserved infamy was forgotten by the Delhi voters as also his destructive 49-day regime. I will end with these lyrics of this famous Bob Dylan song: