Delhi Riots – Time for Hindus to come out of their complacency 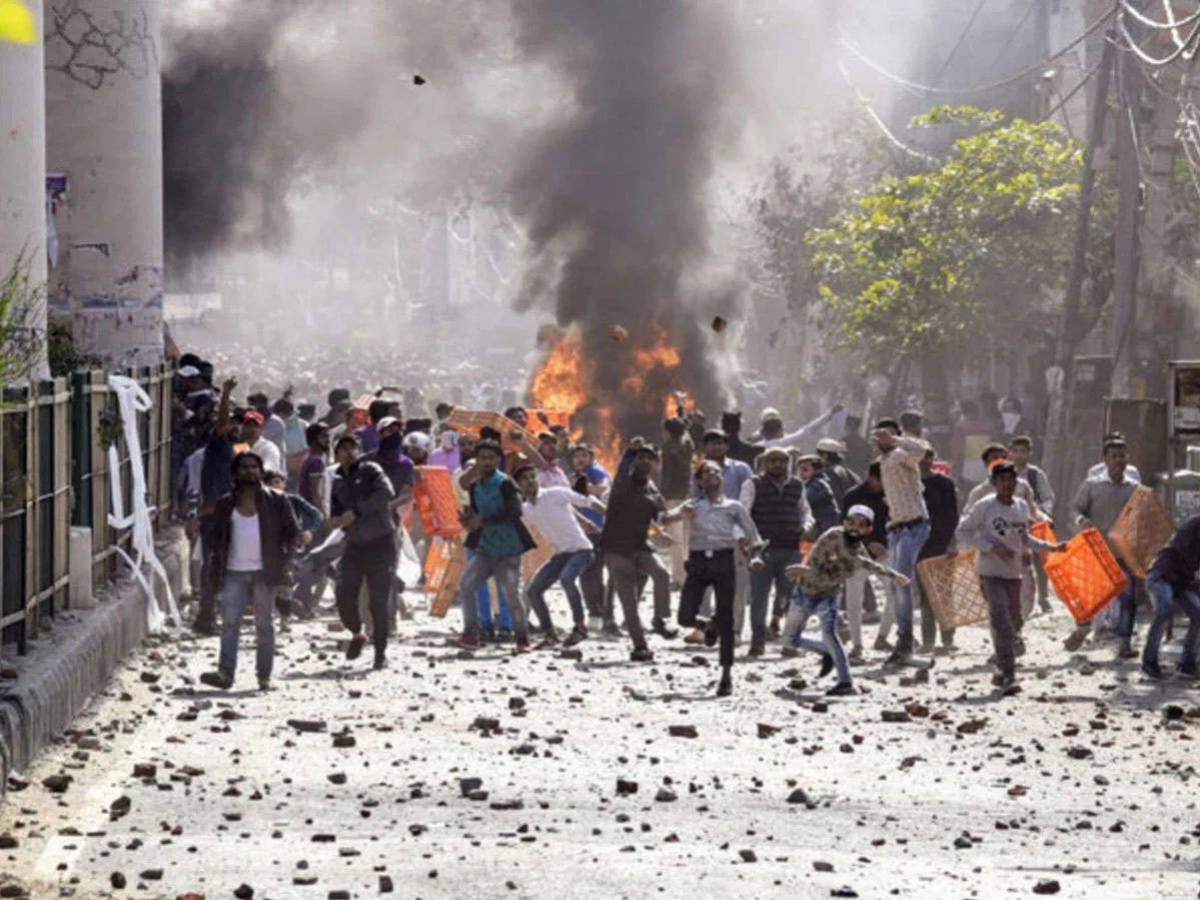 Delhi is one of the most heavily protected capital cities in the world. The Indian Army’s elite 1 Corps is based less than an hour away in Mathura and consists of approximately 100,000 heavily armed troops. The celebrated and fierce Rajputana Rifles Regiment with hundreds if not thousands of battle hardened soldiers is based in the Delhi Cantonment. The 103 Battalion of the Rapid Action Force is based in Wazirabad in north Delhi. The National Security Guard, the country’s primary counter-terrorism force, is based in Palam, minutes from the heart of the city. Plus, there’s the Delhi Police with a sanctioned strength of 84,536 cops. Despite such overwhelming firepower available in Delhi, a ragtag bunch of protesters was allowed to camp out at Shaheen Bagh, block a key arterial road and hold an entire city hostage for more than two months. You will never hear of such a soft state in the history of the planet. This systemic impotence of the Indian nation has for decades allowed goons to disrupt civic life with sickening regularity.

At the point of writing this, 24 people, mostly Hindus, have been killed in the Delhi riots. Nowhere else in the world but India does the majority community face targeted killings. This happens because of two reasons. One, Muslims are easily provoked by their mullahs, the Indian left-liberal media and self-styled seculars to launch mob attacks against unprepared and unorganised Hindus. This is why someone like Akbaruddin Owaisi says, “Remove the police for 15 minutes, we will finish off 100 crore Hindus.” (1) Owaisi knows that if it comes to a riot, the Muslims will attack and kill many Hindus and the secular government will step in to stop the rioting before Hindus have a chance to retaliate. Planned or not, this has been the jehadi playbook since the pre-Partition riots.

The second reason why Muslims are emboldened to attack not just Hindus but also the police is that India has one of the lowest police-population ratios in the world, better only than Uganda. (2) The police are also poorly equipped. Usually armed with lathis and with the minimal protective gear, they are forced to confront jehadi mobs carrying revolvers and swords. The photo of the fearless policeman who remained stoic despite a rioter named Mohammad Shahrukh pointing a gun in his face is making the rounds of social media. (3) But not everyone is lucky. Jehadis shot dead head constable Ratan Lal, a father of three children. (4) Intelligence Bureau officer Ankit Sharma was tortured and shot while trying to rescue people trapped by a Muslim mob. (5) DCP Amit Sharma’s official car was burnt and he was beaten so badly that he’s in an intensive care unit. (6) Nowhere in the world are the elite so well unprotected and policemen so defenceless.

A single Sukhoi Su-30MKI costs Rs 450 crore and India is acquiring a fleet of 300 of these fighter aircraft for an eventual cost of well over Rs 1,35,000 crore. For the cost of a single Sukhoi, every cop in Delhi can be equipped with stun guns, armoured vehicles and bullet proof clothing so they can effectively tackle the increasingly violent and organised jehadi mobs. While the chances of a war with Pakistan or China are slim in a nuclear backdrop, the real frontlines are now within our cities where Pakistan backed mullahs and terrorists have infiltrated Muslim neighbourhoods and are provoking Muslims to attack their Hindu neighbours and friends.

It needs to be understood that the Citizenship Amendment Act and National Register of Citizens –which Muslims and their fake secular friends are protesting against – were merely the tipping points. The real anger of Indian Muslims is because of these key developments:

The promulgation of the CAA was the perfect excuse to explode because it gave the jehadis the fig leaf of fear. According to them, Muslims were afraid of losing their citizenship and that’s why they were erupting in anger. Sounds counterintuitive but since when have jehadis made sense. They fought to create Pakistan and today Muslims in Pakistan are the world’s most miserable Muslims.

How the centre goofed up

The Centre’s inaction for over two months seems opportunistic. Clearly, by giving a long rope to the protestors it hoped to generate a backlash from the majority in the run-up to the Delhi polls. However, that ploy backfired as the BJP lost to the AAP. It was grossly unfair to the ordinary people whose lives and livelihoods were at stake. Most Indians would have better appreciated it if the jehadis had been evicted, with brute force if required. There is a precedent for this. In 2017, police shot dead 30 followers of Sirsa Dera chief Gurmeet Ram Rahim when a mob of 1,50,000 went on a rampage in Haryana after the cult leader was convicted in a rape case. (7) The BJP government didn’t do too badly in the following elections.

Roads are the arteries of a nation and should be free flowing at all times. There have been several instances where ambulances were blocked by the protestors at Shaheen Bagh, resulting in the death of the patient. (8) (9) The economic loss that resulted from these riots, roads blocks and strikes must be in the thousands of crores of rupees. Imagine the plight of the family of a daily wage earner who couldn’t put food in the mouths of his hungry children because he wouldn’t sell newspapers at the railway station or sell snacks at the bus terminus. Think of the thousands of small entrepreneurs or traders who lost their entire stock of perishable goods because the markets were closed down.

However, if there’s anything good that has come out of these nation-breaking attempts, it is that these violent protests have exposed the deep faultlines that exist within Indian society. Many fence-sitting Hindus (also known as HINO or Hindus In Name Only) have become aware that while they were happily consuming the snake oil of secularism, the minorities had all along been anti-Hindu. To many Hindus it has come as a shock to discover that well-known Muslims such as Javed Akhtar and Aamir Khan who were self-styled leftists, communists, seculars or atheists had worn these labels in order to be able to slander Hinduism, Hindu rituals, the BJP or Narendra Modi, without appearing to be exposed as bigots. In fact, people like Akhtar and Khan are nothing but drawing room jehadis. It is the ultimate Taqiya – Koran-backed subterfuge and deceit. (10)

Muslims and Christians – sometimes acting alone, sometimes prodded by their secular cronies and leftist political outfits – have not shown the least hesitancy while indulging in anti-Hindu bigotry. The protests, which were ostensibly against CAA and NRC, have turned into hate-fests against Hindus. Among the several hateful posters on display at places like Aligarh Muslim University and Jamia Millia College in Delhi was this banner which screamed “F**k Hindutva” with the holy Om symbol twisted to appear like the Nazi Hakenkreuz. (11) Emboldened by the support shown by Indian seculars, the protests have become platforms where Islamists are now called for Islamic supremacy in India. (12)

Hindus in vulnerable locations like the Gulf sheikhdoms are being targeted by Indian Muslims for supporting CAA on social media. Several Hindus have lost well-paying jobs and are having to hide from jehadi mobs. (13)

Having opened a can of worms through their anti-Indian slogans such as “Jinnah Wali Azadi”, the Muslims and their secular ‘friends’ are now furiously back-paddling and have even started singing the National Anthem (ironically perhaps for the first time in 70 years). However, the orgy of hate demonstrated by the Muslims is unlikely to be forgotten by the majority. Hindus are an extremely difficult religious group to polarise because even at their most vulnerable moments they are prone to disunity. The violence unleashed by well-armed jehadi mobs could be the beginning of a permanent consolidation. For, if the most heavily protected city in India can be so easily turned into a mini Syria, then Hindus in places like Kerala or Bengal, where the Muslim population is inching towards the one-third mark, are even more vulnerable.

How to tackle anarchists – lessons from America

The sight of Indian policemen fleeing from mobs is in stark contrast to how it plays out in other societies such as the United States. In September 2011 during the Occupy Movement that challenged social and economic equality in America, tens of thousands of people illegally occupied key streets and business districts in 600 communities across the United States. Like the Shaheen Bagh anarchists, these protestors too indulged in vandalism, rioting and public defecation.

After a month of minor action, the police in various States decided they had had enough. It started with the city of Oakland where police in riot gear fired tear gas, stun grenades and rubber bullets after declaring the gathering an “illegal assembly”. The police chief said the use of gas was “necessary to protect officers and property” and only after thousands of protestors escalated the situation with violence. (14) On Wall Street, protestors were sprayed with orange pepper spray and those who resisted were slammed to the ground. (15) At the University of California (Davis), student protestors were pepper sprayed directly in their faces. In New York, more than 700 protesters trying to march across the Brooklyn Bridge were trapped and arrested halfway. From Atlanta to Denver to Portland, police used tear gas and rubber bullets, jailing people like criminals. (16)

Within days order was restored and millions of Americans were able to return to their jobs and business. This is how you act when your country is threatened by anarchists. As the ancient Chinese saying goes, “Only thieves nurtured at home can truly despoil a homeland.”