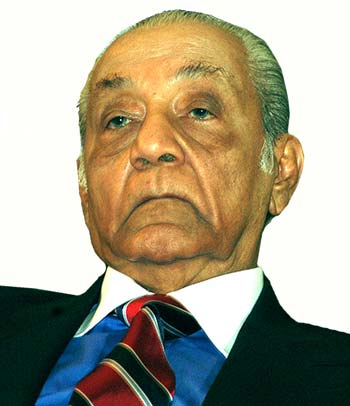 In an edit page article in the Indian Express dated 10 September 2015, A G Noorani  takes further the ongoing Leftist campaign to turn India into a socialist police state with the help of courts:

“This is not a private affair between one citizen and another. It touches the secular basis of our nationhood. The UPA government had drafted the Equal Opportunities Commission Bill. But the NDA government is not in a great haste to secure its enactment. However, if Parliament remains inactive, the judiciary would be well within its powers to intervene. It is the state’s duty to provide houses for the citizen, which is why state corporations are set up to build houses. The right to work cannot be denied either. In each case, the private sector undertakes activities that are properly the state’s concern. Even in that haven of private enterprise — the United States — the Supreme Court developed the doctrine of “businesses affected with a public interest” as far back as in 1876. Thus, the rental of houses in the city of Washington during wartime was held to be such a business. Abuses by such entities, in housing or employment, are amenable to judicial correction even in the absence of legislation.”

For the last couple of years, a sinister campaign is on in the media to play up cases of denial by home owners to rent out their homes to media’s preferred victim group of the moment.

There are many categories of persons who have always found it difficult to get a house on rent in our cities. For example: single boys or single girls. But it was taken as a given that the owner of a house will only take in someone he or she feels safe and comfortable with. It was never taken to mean that homeowners were victimising or discriminating against single boys or single girls.

But now suddenly it is being played up in media as discrimination and victimisation. The narrative goes thus: if a homeowner has put up his house for rent, he has to rent it out to the first person who turns up at his door; else, he is discriminating against that person. The same more or less goes for jobs in private enterprises. Every rejection is now claimed to be an act of discrimination, as if a private enterprise has to hire the first applicant on the list, without checking his or her suitability.

In saner times, the word discrimination was used only in the context of cases of public or private premises put to public use: like restaurants, cinema halls, shopping areas. But denying entry to persons on the basis of markers like colour, caste, creed, ethnicity, etc clearly constituted discrimination. If a home has been put on the market, to be rented out, it does not become a private premise put to public use. It remains a private affair between two individuals, and the premise being negotiated to be rented out also remains a private space under the exclusive ownership of the homeowner. Likewise, no authority can be allowed to challenge the right of a private employer to choose his employee.

A G Noorani repeats many worn out Leftist cliches in his article: the prime cliché being that housing is the responsibility of the state. However, he doesn’t tell us which article of the Indian Constitution mandates this. Further, to “prove” this, he advances the theory that because the state has Housing Corporations, providing housing becomes the responsibility of state! The State Housing Corporations themselves are the ugly relics of the socialist era of Nehru. And so, by Noorani’s logic, one socialist programme is being cited to justify another socialist demand!

He also cites the US example of courts upholding rent control laws. In other words, if the US courts allow rent control laws within the US, Indian courts must do the same in India. Noorani also mentions that the US courts have stepped in to end entry discrimination. Which is only half-true. US courts ended entry discrimination only at places like restaurants, that is, private spaces put to public use. The courts in the US have never held that a home put out for rent becomes a public space to be rented out to the first person who turns up at the door.

Of course, the US courts have now started interfering in private employers’ right to choose their employees, and as a result, US manufacturing and businesses have started declining.

Indian leftists are experts at cherry-picking practices from the west. A G Noorani is no different. He talks of US practices which suit him, whereas he has written at length in the past advocating curtailment of Freedom of Speech all over the world, including the US.

The Constitutional revolution of 1937 in the US happened because the courts were psyched into submission by the Leftists led by the then President Roosevelt himself, after a sustained campaign in the media of calling courts anti-people and pro-rich for upholding the sanctity of private property rights and sanctity of contracts. Once the courts caved in, it has been downhill for private property rights and the sanctity of contracts in the US. As a consequence, a huge administrative state has come into being in the US in place of a limited Federal government envisioned by its Founding Fathers. Leftist redistribution of wealth in the US has been steadily achieved by first browbeating the courts into submission.

The same has occurred in India as well. Leftists here, through their control of the media, have bullied courts into becoming enforcers of Leftist programmes, many times legislating these programmes into law through judicial pronouncements. This planned nationalisation of private homes is the latest in the long tradition of Leftists getting what they want through courts, even if people repeatedly reject them at hustings. Of course it has long been forgotten by the courts in India that they are the guardians of Rights of individuals against majorities in legislature.

If Indians do not remain vigilant, they would lose this last, valuable right to own private property. In other words, they’ll lose their own homes and India would truly become a Leftist gulag. Without private property, no political freedom is possible. Vote banks will commandeer homes of individuals at will. In desperation, people would abandon the practice of renting out their homes, and even constructing homes to earn some income by way of rent. And that’s when we will have true unavailability of houses on rent. Needless, economic progress of course will also die as it dies in all socialist countries. Post-Independence India has already undergone enormous suffering and poverty as a result of Nehruvian socialist horrors and is only recently trying to grapple with methods of unshackling itself from it.

As it stands, the Housing sector in India is already messy among other things, due to our mindless rent control laws. Noorani-style of advocacy will truly finish it.