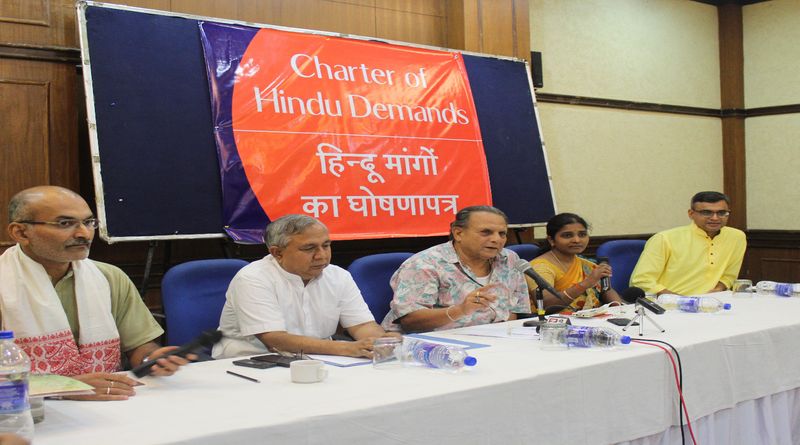 A group of few Hindus, have recently created a charter of Hindu demands, asking the Indian state / PM Narendra Modi to look into the needs of the Hindu majority as equal citizens of this nation.

Upon reading the charter of demands, it is evident that the charter is a non-confrontational demand note that simply lists those points of discrimination against Hindus, correcting which shall not trample upon / reduce any rights of so called minorities in India. In that context, many may not call this charter a comprehensive set of Hindu demands, but nevertheless, it’s a great beginning with the essence of equality and justice behind it. Let us ponder over what the points of demand are, as per the recently concluded ‘Charter of Hindu Demands’ by a group of Hindu individuals:

The biggest problems seem to be with section 15(5) and section 25 (2) a of Indian Constitution, which have led to discriminative control of Hindu run educational institutions, Hindu temples and Hindu religious organizations. In view of these, Dr Satyapal Singh’s amendments are very important for constitutional clarity.

There have been embarrassing cases like Rama Krishna Mission and Lingayats asking for minority status, simply out of what seems like frustration with constant meddling of governments in their institutions, while so called minority communities do not face such meddling. Mosques are partly controlled, and churches are not controlled by the government.

Similarly, the government has a strong level of control on educational institutions run by majority Hindu community, like the quota system for admitting economically backward children, while the so called minority run institutions are mostly free from such control.

The private schools, namely, Hindu run schools, also have restrictions on teaching traditional Hindu scriptures which are an ocean of wisdom for a wholesome life full of cultural pride.

The premise here is, asking for equality of opportunity, protecting traditional knowledge & management. Or this may lead to driving Hindus out of some things strongly cultural, like running schools.

Nothing comes free, and when an international organization (and not government), grants lakhs or crores of rupees to their Indian branch, or another Indian NGO, it obviously comes at a cost. Here is a basic write up explaining the kind of international donors that Indian NGOs have. It is extremely difficult to assess how much of this money actually reaches the poor, or the purpose for which it is stated. And some purposes themselves appear to make little sense.

It is not a surprise anymore to those who have researched into the realms of judicial activism and ‘rights’ movements across this nation that most of the NGOs who file Public Interest Litigations (PILs) are actually organizations who come under FCRA i.e. receive foreign funds, or are branches / agents of large foreign NGOs or Church bodies et all. Even on extremely native issues, which are far from understanding of foreign residents, like the issues of Jallikattu, Kambala, etc., the PILs filed have participation of foreign funds. Here is good read on the issue.

A very good example of how native activities of cultural faith are being subjected to unnecessary debates and intolerable criticisms is this write up on an NGO bringing down the status of Amarnath Yatra to ‘tourism’ and then criticizing it.

So, it is a matter of concern and needs to be taken up by government if such large amounts of foreign money are being used to create unnecessary activism in our nation, stalling the development of the nation and somewhere eroding the pride of Indic religions towards its ancient practices and furthering religious conversions in a subtle way.

The larger idea behind this point of demand is that today, apart from interference from FCRA NGOs, even the state and judiciary finds it easier to regulate the Hindu traditional practices while treading carefully on any issue of ‘rights’ debate that crops up in other so called minority religions. This clause is requesting the government to free the oldest Dharma based religion from such interferences and regulations. It is bitter to see judiciary and / or state taking up the cases and regulating things of absolute faith such as ‘how much milk to be poured on the shivaling’, ‘whether Ganesha Utsavas need DJ & Dolby sound or not’ et all.

A very good example of it is the way the state / judiciary discriminates between the traditions of Dahi Handi and Muharram. A PIL was filed in the Maharashtra court over ‘rights’ of children for safety in Dahi Handi competitions. On the side note, let me mention that Spain hosts the world’s biggest version of Dahi Handi, called ‘The Concurs de Castells’ in Catalonia region. Instead of upgrading the safety gear of the children and teens participating in the Dahi Handi, the court had restricted the height of the human tower and barred children under 18 years of age to participate. How is a human tower made without the lightest and smallest child on the top?!

And Dahi Handi is not merely a competition for Hindus, it is a religious tradition related to Shri Krishna cracking / or taking away the mud pot for curd / butter. It has religious sensitivities involved in its celebration.

Compare it with the day of Muharram, where hundreds of Muslim boys self- flagellate on streets, carrying swords, blades, many parents get their little babies have a cut on their heads. Muharram is then shown off on streets, roads, railway stations, in front of mosques, anywhere! While other religions look on at the blood spilling over from the cuts of Muslim youth and men, these men march with a show of cultural pride. But nobody questions if it is ok to ‘self-flagellate’ in this manner, that too in public.

Article 370 of Indian Constitution exempted the State of Jammu & Kashmir from the complete applicability of the Constitution of India. The State was allowed to have its own Constitution.

Central legislative powers over the State were limited, at the time of framing, to the three subjects of defense, foreign affairs and communications. Other constitutional powers of the Central Government could be extended to the State only with the concurrence of the State Government.

Now, because of Article 370, Article 35 (A) was enforced in Jammu & Kashmir which empowers the Jammu and Kashmir state’s legislature to define “permanent residents” of the state and provide special rights and privileges to those permanent residents.

The Jammu and Kashmir Constitution, which was adopted on November 17, 1956, defined a Permanent Resident (PR) of the state as a person who was a state subject on May 14, 1954, or who has been a resident of the state for 10 years, and has “lawfully acquired immovable property in the state”. The Jammu and Kashmir state legislature can alter the definition of PR through a law passed with two-thirds majority.

Also, the electoral preference to Kashmir valley is evident in the political history of the state, because of which Kashmiri Hindus have earlier faced persecution and demographic equilibrium in the regions of Jammu and Ladakh is in danger.

The division of state, into a separate Kashmir, a separate Jammu and a separate Ladakh will ensure that Indic populations do not face any direct future persecution or discrimination politically. With framing of Jammu and Ladakh as separate states / UTs, they will get rid of Article 370 and Article 35 (a), hence assimilating with oneness with rest of the nation.

14 lakh tons of meat/beef was exported during 2017-18. There is an increase in illegal trafficking of cattle within the states of India, leading to malpractices in preparing packaged meat. It is leading not only to environmental hazards but also leads to generation of black money by the illegal trafficking and shoddy unlicensed slaughterhouses.

Different states have different regulations on slaughter of red meat, with heavily commercialized Industrial farming of cattle only for slaughter, there is a huge drain of clean natural resources like water, the cattle face extreme cruelty in modern and space crunched abattoirs. Every day, there is some or the other news in Hindi / vernacular media about shots fired at even Police by cattle smugglers.

Here is an interview by a Haryana IPS officer about the whole issue of meat / beef and the fact that it generates black money.

Although the ancient heritage of this nation calls out for complete beef ban within the nation too, but such huge exports of meat are in direct contradiction of the ethos of majority religion and Directive Principles of our constitution, and need to be banned for reducing malpractices in meat industry.

There are hundreds of temples, forts, samadhis of valorous Hindu warriors that are lying in ruins and dilapidated condition. Some of them face danger of illegal encroachment from various land mafias. The state also has a civilizational responsibility to protect and restore these sights. Some of these lands can be used to promote our scriptural studies. By not restoring these spaces, the state is depriving the future generations of practical heritage experiences and pride in our history.

It is evident from the media agencies of neighboring countries that people of Indic faiths are facing discrimination in other countries and sometimes even face persecution. Hindus in Bangladesh have fallen from 29.4% in 1931 to 9.5% in 2011. And in spite of Hindu population stabilizing under 2 % in Pakistan, since 1961, the cases of forced conversions of Hindu girls keep surfacing in Sindh.

With India now remaining as the only large country with Hindu majority, we need to keep native civilizational view also in mind and grant refuge and citizenship to peoples of Indic faiths fleeing religious persecution from any country.

Today, in this nation, anybody who cannot read / speak English gets denied of many opportunities and ultimately suffers with inferiority complex because of not been able to stand at the same level competitively with English. With globalization of English, and India adopting that globalization internally, this has become more evident. The youth knows that English is the language of fulfilling aspirations. But we are promoting English at the cost of losing pride in our native languages.

There is an institutional discrimination that exists against native / regional languages, be it lack of higher studies in those languages, or lack of acceptance of such languages nationally in professional vocations. There is no equality linguistically. A regional board student faces tough challenges in doing higher studies because most of those studies are only available in English beyond a point. This is not the case in various other countries.

So, these were the Hindu demands presented by a group of Hindus recently in a press meet in national capital. Though I would not call it a complete set of demands that Hindus across nation may have, but nevertheless, it’s a very important and great beginning to ask for a set of non-confrontational demands which are important to bring justice to millions of Hindus constitutionally.

Overall, a truly secular and liberal state has equality and parity as its base of governance. What is the point of being a majority, when the basic rights that are available to the so called minorities are not even available to the existing majority? This is injustice and high time, these demands are executed.