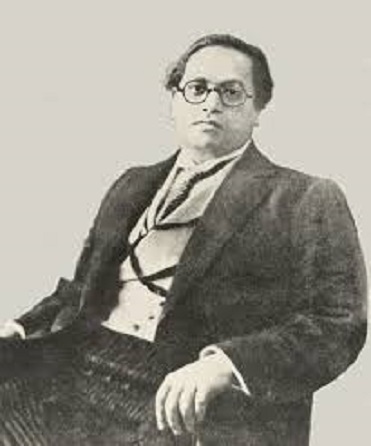 Dr. Bhim Rao Ambedkar, the chief architect of our nation’s constitution is now mostly remembered as the leader of the Dalits and is regrettably co-opted by individuals like Kancha Ilaiah and the Marxists who advertise him as their icon only to create social tensions. It is a tragic irony that whereas Dr. Ambedkar mistrusted the Aryan race theory and constructed his own view of the social history of the downtrodden masses of India, several of his modern day supporters still fall back on the specious AIT and create confusions about India’s past to serve their ideology.

As one of the pioneering social historian of ancient India, Babasaheb Ambedkar penned important academic works to examine the primary source of India’s caste. His monumental book ‘Who were the Shudras?’ is one among many such scholarly works. This book was among the earliest works by an Indian scholar to debunk the colonial absurdity of Aryan/Non-Aryan theory.Some extracts from the book are illuminating as to where Ambedkar stood on the question of caste and provide the much-needed course correction in terms of public discourse in India.

The erudite Babasaheb also goes further and reveals his deep knowledge of the Rig Veda. On pages 69-70 here’s what he says:

Those who uphold the theory of an Aryan race invading India and conquering the Dasas and Dasyus fail to take note of certain verses in the Rig Veda. These verses are of crucial importance. To build up a theory of an Aryan race marching into India from outside and conquering the non-Aryan native tribes without reference to these verses is an utter futility. I reproduce below the verses I have in mind:

(2) Rig Veda, vi.60.3— “Indra and Agni—these protectors of the good and righteous suppress the Dasas and Aryas who hurt us.”

(3)  Rig Veda, vii.81.1.— “Indra and Varuna killed the Dasas and Aryas who were the enemies of Sudas and thus protected Sudas from them.”

(4)  Rig Veda, viii.24.27.—”Oh you, Indra, who saved us from the hands of the cruel Rakshasas and from the Aryas living on the banks of the Indus, do thou deprive the Dasas of their weapons.”

(5) Rig Veda, X.38.3.—“Oh you much revered Indra, those Dasas and Aryas who axe irreligious and who are our enemies, make it easy for us with your blessings to subdue them. With your help we shall kill them.”

(6) Rig Veda, X.86.19.—Oh, You Mameyu, you give him all powers who plays you. With your help we will destroy our Arya and our Dasyu enemies.

Further examination of the Shudras as Non-Aryan community is provided on pages 86-89:

On the question of the line of demarcation; between the Shudras and Aryans, the matter needs to be carefully examined. The strength of the argument that the Shudras were non-Aryans is to be found in the following statements:

These stanzas, which speak of the Shudra and the Arya as separate and opposed, form the foundation of the theory that the Shudras are non-Aryans. To say the least, such a conclusion would be a very hasty one. Two considerations must be borne in mind before any conclusion is drawn from the aforementioned statements. In the first place, it must be borne in mind that according to what has been said before and according to the evidence of the Rig Veda, there are two categories of Aryans, the Vedic and the non-Vedic.

Given this fact, it would be quite easy for an Arya of one class to speak of an Arya of another class, as though the two were separate and opposed. Interpreted in this way, the above statements, in which Shudras are set against the Aryans, do not mean that they were not Aryas. They were Aryas of a different sect or class. That this is possible can be seen from the following statements in the sacred literature of the Hindus:

It is also interesting to examine Dr. Ambedkar’s views regarding the clash between two civilizations. On page 70 he says:

…..there were two different communities of Aryas who were not only different but oppose and inimical to each other. The existence of two Aryas is not a mere matter of conjecture or interpretation. It is a fact in support of which there is abundant evidence. The first piece of such evidence, to which attention may be invited, is the discrimination which existed for a long time in the matter of the recognition of the sacred character of the different Vedas. All students of the Vedas know that there are really two Vedas: (1) the Rig Veda and (2) the Atharva Veda. The Sama Veda and the Yajur Veda are merely different forms of the Rig Veda. All students of the Vedas know that the Atharva Veda was not recognised by the Brahmins as sacred as the Rig Veda for a long time. Why was such a distinction made? Why was the Rig Veda regarded as sacred? Why was the Atharva Veda treated as vulgar? The answer, I like to suggest, is that the two belonged to two different races of Aryans and it is only when they had become one that the Atharva Veda came to be regarded on a par with the Rig Veda.

And on page 88, we have his analysis of the Dharma Sutras:

That the Dharma Sutras call the Shudra Anarya and the statements in the Vajasaneyi Samhita pouring scorn on the Shudra woman, do not mean anything. There are two arguments against accepting the testimony of the Dharma Sutra. In the first place, as will be shown later, the Dharma Sutras and other treatises are books written by the enemies of the Shudra. As such, they have no evidentiary value. It is also doubtful whether such anti-Shudra statements are mere imprecations or statements of facts as they existed. They seem to contradict facts reported in other works.

The Dharma Sutras say that a Shudra has no right to perform Vedic ceremonies and sacrifices. But Jaimini, the author of the Purva Mimarnsa mentions an ancient teacher by name Badari— whose work is lost— as an exponent of the contrary view that even Shudras could perform Vedic sacrifices. The Bharadvaja Srauta Sutra (v.28) admits that there exists another school of thought which holds that a Shudra can consecrate the three sacred fires necessary for the performance of a Vedic sacrifice. Similarly, the commentator of the Katyayana Srauta Sutra (1.4.16) admits that there are certain Vedic texts which lead to the inference that the Shudra was eligible to perform Vedic rites.

After closely examining Vedic scriptures, the conclusion drawn by Babasaheb was this:

Now although the theories presented in ‘Who Were the Shudras?’ are arguable, it must be clear to the readers  that the points made by Dr. Ambedkar are more helpful to have a healthy debate on the issue of caste compared to the wholesale distortions penned by many of our eminent historians and sociologists.