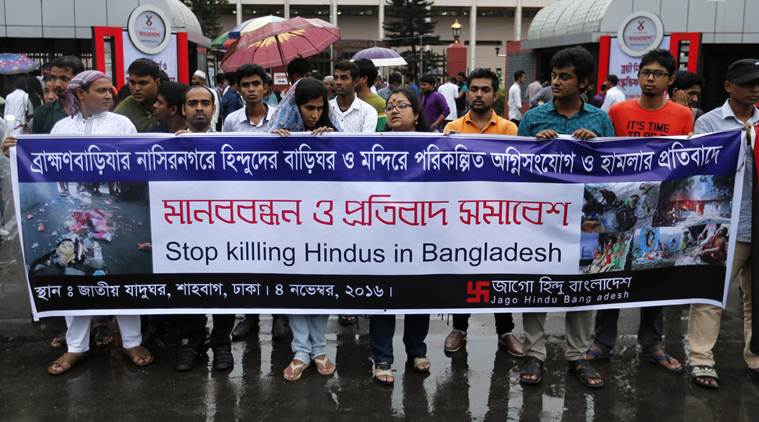 Imagine a family living in a large beautiful ancestral home. The house, originally belonging to the family, was the seat of a magnificent civilisation where happiness, intellectualism and progressiveness were promulgated smoothly along with the traditionalism. Then came, as a consequence of series of disastrous misadventures, some vindictive, baleful and rancorous ‘invaders’ gunged with duplicitous ideals and deleterious dogmas. They – after initially nestling themselves in the adjacent house – gradually started expanding their reach, swallowing their vicinity, creating havoc and destruction throughout, succouring darkness; eventually dimming the light of culture. Rape, mass murder, destruction and forceful conversions converts the magnanimous aroma of the house into a tenebrous reflection of the dark realm.

One day they partition the house into two separate houses – one for themselves. When they have no one to pour their liquid of destruction upon, they threaten the life of original inhabitants left in their part of house. Time turns its wheels and atrocities on ‘minorities’ in the separate house – the original inhabitants – doesn’t stop. Inimical tides turn into annihilating tsunami. Neighbouring house members jumps into the tsunami to save the others, and with their mighty strength saves the one part of the other house from another part’s inflicted destruction. The fight ends and as a result new house is charted from the other house, which itself was created just few years prior. But the plight of original inhabitants – still the minority in the new other house – sees no improvement. Atrocities continues but in a more veiled and silent way, this time by the authorities of the newly created house. Culprit changes but the victim doesn’t. Years later the original inhabitants are mere walking dead.

This is pretty much the story of Bangladeshi Hindus. They’ve been subject to brutal atrocities and destruction committed by the majority of Bangladesh which mounts a condition of ethnic cleansing. The recent mass addition to the list was made in 2017. In the year 2017 alone, according to the Bangladesh Jatiya Hindu Mojahote, an umbrella organisation representing Hindus within Bangladesh, 107 Bangladeshi Hindu civilians were murdered, 31 Hindu victims disappeared, at least 25 Hindu women and girls were raped, 23 Hindus were forcefully converted and 235 Hindu temples and statues within Bangladesh were desecrated. The same report also claimed that 782 Bangladeshi Hindus were forced to flee to India due to persecution by the Bangladeshi government and radical Islamist groups. This means that 6,474 different atrocities were committed against the Hindu community in Bangladesh in 2017. Which was even higher at 11,335 in 2016. One example of that was seen in Sovandadi village of Patiya, Chittagong where houses of 20 to 22 Hindu families were burned to the ground.

And these are all just the ‘reported ones’. Shipan Kumar Basu, the head of the Hindu Struggle Committee, believes that many atrocities within Bangladesh are unreported: “A lot of Hindu homes were burned in Chittagong Moheshkhali and there were other crimes that occurred against the minorities but they were not published in any newspaper.” The problem does not end there. The powerful establishment of the state of Bangladesh functions, directly and indirectly, either in support of the culprits or in ignorance of the conflict. The atrocities, most of the time, is the subject of no value to the Bangladesh authorities. And the culprits in fact, sometimes, gets a helping hands from the establishment.

Following Bangladesh’s War of Independence, almost 10 million Hindus were displaced, thus making it difficult for the authorities to establish direct ownership of property within specified legal timeframes and this reality showed the real face of Bangladesh authorities. The establishment, specifically the Awami League government confiscated 1.05 million acres of the Hindu land through Vested Property Act, 1972 and benefitted from the turmoil, showing absolutely no care for the Hindus. The authorities have time and again proved they hold no sympathy and sense of responsibility towards the Hindus.

These all are not one off incidents, the various attempts to ethnically cleans Hindus in Bangladesh dates back years. The ugliest turn in the time was, of course, the 1971 War of Liberation.

In 1971, throughout the 9 month long persecution carried out by Pakistan’s Army in the then East Pakistan, the primary target was the Hindu community. The Muslim Pakistani Army unleashed a series of ‘holocaust’ like deleterious vindictive persecution, abduction, destruction, mass killing and raping of, predominantly, Hindus with an evil objective of quashing Hindu culture and religion in their ‘territory’.

The horror was captured in the red and cold words of Sunday Times journalist Anthony Mascarenhas, who reported at that time, “I was getting my first glimpse at the stain of blood which has spread over the otherwise verdant land of East Bengal. First, it was the massacre of non-Bengalis in a savage outburst of Bengali hatred. Now, it is a massacre carried out by the West Pakistan Army. Hindus, hunted from village to village and door to door, were shot off-hand after a cursory short-arm inspection showed they were uncircumcised. I have seen truckloads of human targets and those who had the humanity to help them hauled off under the cover of darkness and curfews. I have witnessed the brutality of kill and burn missions after the army who cleared off the rebels pursued pogroms in the towns and villages. Women were raped or had their breasts torn out with specifically fashioned knives. Children did not escape the horror. The lucky ones were killed with their parents but many thousands of others go through what remains of them with eyes gouged out and limbs amputated.”

Hindus were subjected to extreme brutality and inhumanity waged on them by the Pakistan Armed forces which was covered in the blood soaked veil of jihad, away from any moral summoning. Hindus of East Pakistan suffered one of the worst of genocides in history. The year was the darkest in the already dark century for them. 2.5 million to 3 million Hindus were slaughtered including women and children. Absolute barbarity and lava of intense hatred was poured over them from the bucket of Jihad. And many, fortunates, fled the blood field to protect themselves and their family. As Hindus were the prime targets of army, no wonder 80% of refugees fleeing East Pakistan were Hindus numbering around 8 – 10 million. The destruction was planned and systematically executed.

Reminiscent of the Jewish holocaust, Hindu homes and shops were marked by a yellow “H” to guide the marauding army to their targets. Sydney H. Schanberg, The New York Times correspondent to Dhaka in 1971, gave the first hand account of the brutal massacre of Hindus in Bangladesh. Schanberg reported “Hardest hit have been members of the Hindu community who have been robbed of their lands and shops, systematically slaughtered, and in some places, painted with yellow patches marked ‘H’. All of this has been officially sanctioned, ordered and implemented under martial law from Islamabad.”

Women were subjected to unimaginable misery and they became victim, for just being born into a different faith, to baleful deleteriousness ‘medieval’ brutality. Schanberg shedding light on the disturbing plight of Hindu women at the hands of Muslim Army wrote “The Pakistan army and the Razakars did not stop at simply massacring Hindus. They also took to raping Bengali women.

During nine months in 1971, over 200,000 Bengali women and girls were raped. Many were taken as sex slaves and raped multiple times by the Pakistani army.”

Insult to injury was Bharatiya ‘secular’ media’s systematic blackout of the massacre. Never they made for the way for realism in reporting and never they reported what foreign media did with grit. Majority of the Bharatiya populace were unaware of that planned destruction of their kith and kin.

The 1971 genocide was a construct and a manifestation of the idea that led to series of minor jihadi incidents affecting the innocent Hindus ever since the 1947 partition. 1971 was neither the start nor the end.

The Unnatural Change of Demographics

The pattern of degradation and destruction of Hindu community, demography, culture and religion as a whole shows crystallinity about systematic-ness of it. Right from the 1951, we see a rapid and consistent decline in Hindu population in Bangladesh (East Pakistan 1947-1971).

Before partition Hindus in the then East Bengal comprised 30-31% of the total population. Partition led to huge influx of Hindus in Bharat and out-flux of Muslims in East Pakistan. Migration reduced the number of Hindus in East Pakistan to about 22% of the total population as per the 1951 survey. Decades after partition, when the sands were settled, the religious demography of East Pakistan was supposed to be stable. But it didn’t settle, instead the Hindus were consistently diminishing and reducing in numbers.

With the same Socio-economic conditions, ethnicity, landscape, fertility and mortality rate, stable and continues religious demography was something naturally expected. But despite similar conditions, the minorities in Bangladesh, unnaturally, kept on vanishing. “Due to unabated persecution, intimidation, and forcible conversion to Islam, the Hindu-Minority population kept on dwindling” wrote Rahul Gupta for Hindu Jagruti Samiti.

The continuous hate crimes, prosecution, killings, forceful conversions, mass destruction, religious desecration and slow demographical vanishing of Hindu community are crystalline and pellucid indications of a horrific ethnic cleansing of Bangladeshi Hindus. But the world is still either unaware or intentionally silent on this systematic ethnic cleansing. In a globalised world where illegal Rohingya refugees are revered and garlanded with, the innocent Hindus of Bangladesh are met with step-motherly inhumanly treatment. Large international organisations like United Nations never uttered a word in favour of millions of Hindus subjected to this brutality and hate crimes.

Each global media has betrayed the ethics of journalism and essential values of humanity by ignoring such a huge case of ongoing ethnic cleansing of Hindus in Bangladesh. India, after years of tears and cry, has finally acknowledged their condition by formally enacting a law fast tracking their naturalisation in India, something which Hindus from Bangladesh – and Pakistan and Afghanistan – direly needed.

But despite every assertion of Citizenship Amendment Act (2019) matching the global gold standards of humanitarianism, many – predominantly Muslims – in India are up in arms against it. The act is being despised solemnly on the elision of Muslims as refugees along with Hindu, Buddhists, Jains, Sikhs, Parsis and Christians. An opportunity to welcome the suffered ones has fell afoul to the squinted, murky and somewhat morbid interpretations of secularism. While majority of Indians have opened up their arms to refuge innocent minorities from 3 Islamic States; some have added salt to their wounds by protesting against the act.