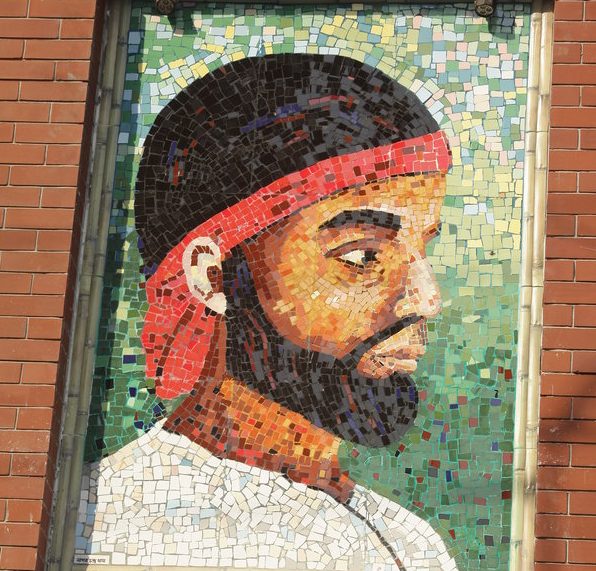 Titu Mir (1782–1831) is eulogized in Bengali children’s literature as a brave freedom fighter who dared to stand up against the British might from behind his bamboo fort. He is celebrated in Bengali folklore as a peasant leader. He is particularly honoured in Bangladesh.

The Left historians  consider him as a leader of the agrarian revolt.

So who is Titu Mir?

Since not much record is available, the only reliable source to know  about Titu Mir is from John Russell Colvin’s Report. John Russell was a British civil servant in India. He was lieutenant-governor of the North-West Provinces of British India during the mutiny of 1857. He was appointed to give a report on Titu Mir.

“Titu Mian, to the authorities as Mir Nisar Ali. This man had begun life as a small cultivator. It was whispered that he had been the leader of a robber gang. He drifted in course of time to Calcutta, where he became a wrestler. Thence he passed into the service of one of the large landed proprietors, who kept each in his pay a retinue of swashbucklers. The business of these bullies was to break each other’s heads over their masters’ disputes, whenever a boundary question or the right to a plot of land had passed beyond the power of argument. This occupation brought Titii Mian, who was an expert at it, within the four walls of one of the Company’s jails. The experience seems to have led to a distaste for engaging in other people’s quarrels. On his release, he took the ship to Mecca, where salvation awaited him. For Sayyid Ahmad met him; made him a disciple, and sent him back an Apostle to India. He preached the Wahabi tenets to the north and east of Calcutta. Many adhered to the Apostle; some doubted; others made a scoff of him. But Apostles are not to be lightly scoffed at. Titu Mian, though now enlisted in the service of a divine master, had not forgotten the cunning of the right hand which had been once raised in earthly interests.”

So according to John Russell Colvin Titu Mir was a swashbuckler in the retinue of a landed zamindar. His occupation led him to Company’s Jail. On being released we went to pilgrimage to Mecca where he chanced to meet Sayyid Ahmad who later sent him back as an apostle of Wahabi Islam.

Since the advent of Islam in Bengal, Bengali Muslims followed a syncretic version of Islam. Sufism and Bauls had established a pluralistic society in Bengal. Both Muslims and Hindus lived peacefully and harmoniously and often borrowed each other’s customs. It was not unusual for a Muslim to go to Sitalah Matah’s temple to find a cure for small pox and a Hindu to visit dargah of a Sufi with a wish for a child.

On the other hand,  Wahabism is totally opposed to Sufism, the main guiding force of Muslims in the Indian subcontinent. Wahabi movement originated in far-off Arabia and reached India via Syed Ahmed of Bareilly. Titu Mir was a recruit of the Wahabi movement.

In 1827 Titu Mir returned from Mecca to Bengal and preached pure Islam amongst the Muslims and advised them to refrain from un-Islamic practices.

Titu Mir’s master Syed Ahmad Rai Barelvi (1700-1850) was the chief exponent of Wahhabism in India, an adherent and fervent advocate of puritanical fundamentalism and jihadism.

In a letter, Syed Ahmad portrays declining conditions of the Muslim community and decay of the Mughal Empire in these words:

“Large part of the India has been captured by foreigners. They have adopted the policy of brutality and injustice. The government of Indian (Muslim) rulers has vanished. No one has the courage to challenge them. Everyone has started to consider them his master.”   The simple monotheistic teachings of  Islam had been polluted and ignored.  Many innovations and un-Islamic traditions had been introduced and sanctified. Mughal  rule in  India had almost  ceased to  exist and  political  scene was  dominated  by  British  Empire,  represented  by  East  India  Company,  which controlled  most of  northern  India, the  Marhattas in southern and central  India, Sikhs in north-west and hundreds of powerless rulers of princely states”

Syed  Ahmad sincerely desired to see the restoration of the supremacy of Islam. Syed Ahmad used to say:-“When a Muslim state has been occupied by Non-Muslims, then Jihad becomes obligatory, both for the Islamic Ummah (Muslims)”

His resentment was not only against the Britishers but also Sikhs and Marathas. He organized a mujahedeen force to fight the Sikhs under Ranjit Singh. The Battle of Balakot is the first historically recorded Jihad inspired by the Wahabi ideology. Jihadis of South Asia such as the Taliban movement take inspiration from Syad Ahmad Barelvi.

Like his master Titu- Mir wanted a Muslim revival and led a Jihadi upsurge. He fought to throw out the British so that Muslims could avenge defeat  at the battle of Plassey. He considered Hindu Zamindars as a usurper of power. He mission was to make  dar al-Islam  (house of Islam) from  dar al-Harb (house of heathens).

From the Report of John Russell Colvin, we also come to know:-

“The zealots had begun to assemble in great numbers. By November 6 they had gathered. Then began their operations in the time-honoured way in which the Muhammadan in India declares war against his Hindu brother. They seized and killed a cow, sprinkling the blood over the walls of a Hindu temple, and hanging up the carcass in front of that building. Then, a Brahman was killed. With the slaughter of a cow and a Brahman, vengeance had begun prosperously. The Hindus turned out to oppose Titu Mian and his host. Another Brahman was claimed by vengeance.”

From the above report it is clear that  Titu Mir killed cows, desecrated temples and murdered Brahmins. Hence he was no freedom fighter but a Jihadi.

Titu Mir established a bamboo fort near Narkelberia, close to present day Barasat and declared war on the East India Company, the Indigo Planters and the Zamindars. At first many soldiers of the British, Collector was killed and the collector managed to escape with his life.

Later British artillery was deployed and it destroyed the bamboo fort and killed Titu in action on 14 November 1831. His nephew was hanged and some 350 others were sentenced to transportation for life.

Thus ended the Saga of a Jihadist. However, Titu Mir’s legacy continued and led to the partition of Bengal.