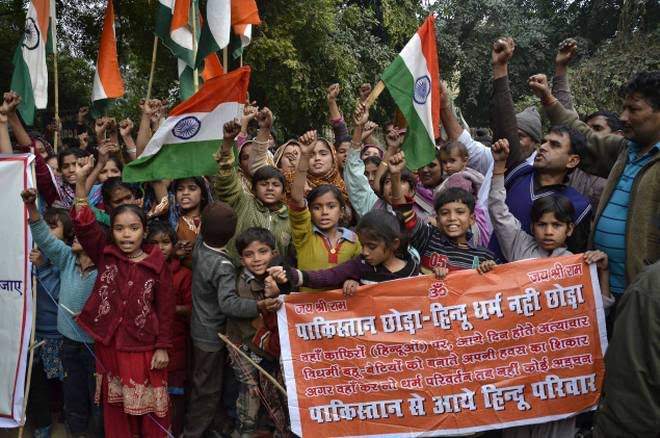 On 11th December, 2019, the Rajya Sabha passed the Citizenship Amendment Bill, 2019. With this the Bill became law, as the Lok Sabha had already passed it two days ago. I do not intend to delve into the legal details and implications of the Bill. Others, far more competent than me, are already doing it. I will instead try to analyze the civilization import of this Bill; and what it means for the Hindu psyche.

Rising Up as the Hindu Nation

All the loony left brouhaha about the Bill rests on the foundation that it discriminates on the basis of religion: that it doesn’t allow Muslims the same status as it gives the followers of other religions, particularly the Hindus. Our Home Minister, Amit Shah, responded by saying that the Bill does not differentiate against Muslims as all these countries are Muslim majority and officially Islamic states. Hence the very possibility of them being persecuted there is non-existent. He is of course right in his assertion.

All the countries included in the Bill: Afghanistan, Pakistan and Bangladesh are Islamic Republics with only a nominal cover of democracy. They are practicing Islamic states with applicable Shariat Law. A State which legally conserves and propagates Islam, Islamic culture and identity can hardly be deemed dangerous to Muslims. At the same time, as Islam is a proselytizing religion, with a hatred for other religions ingrained in its very scriptures, which are the foundation of the Islamic Law, an Islamic state, legally speaking, is a threat to the very existence of any non-Muslim who has the misfortune of living there.

This theory is borne out by the statistics about the changing demography of all of these countries. In 1901, there were around 15.93% Hindus in West Pakistan. In 2001 they have been reduced to less than 1.84% now. As our Home Minister said in the Parliament, the Hindus there were either converted forcefully, or made to flee to India or killed en masse. A silent genocide of Hindus has been going on in Pakistan ever since its independence.

In Bangladesh, the genocide has even been greater and any illusion of Bangladesh being a cultural friend of India breaks down when one sees the changing demography of the country. In 1901, there were around 33.93% Hindus in Bangladesh, who have now been reduced to less than 8% in 2011. A quarter of the population of the country has been wiped out through forcible conversions and outright genocide and the world watches silently. [1]

Both theory and practice of the Islamic states of Pakistan, Bangladesh and Afghanistan testify to the fact that the Hindus in these states will be wiped out completely if not given shelter by India. This fact has always been crystal clear. The political leadership of India under Congress, ever since independence has been hell bent to deny this. In a manner, they have never acknowledged that the Partition was done on religious lines and as hard a fact it is, it has to be accepted.

This denial by the Congress-Communist eco-system is not just ignorant, but downright malicious. Because denying that India was partitioned on religious lines, means denying the religious character of its constituent countries. In case of India, this denial has resulted in the rule of the most intolerant minority, the Muslims. The Hindus, even in India have been on the losing end ever since independence.

However, in Pakistan and Bangladesh this denial by India’s leaders was not just ignorant, or just painful but downright genocidal. For India has been denying for the past seven decades, that Pakistan and Bangladesh are engaged in the ethnic cleansing of their Hindu minorities, perhaps the greatest genocide of any religious community anywhere in the world, in peacetime. No matter how incredulous it sounds, the secular politics of India is as much responsible for the genocide of Hindus in Pakistan and Bangladesh, as the Islamist regimes of these countries are. The blood of lakhs of Hindu women raped, children massacred are also on the hands of Indian secularism.

This Bill is also a tacit acceptance, at the level of the State, that an Islamic State, by its very nature, is detrimental to its minorities, particularly the idol-worshipping Hindus, the worst kind of Kaffirs, in the Islamic jurisprudence. This is a huge step in the direction of the civilizational battles that are to be fought ahead in future. The first step towards fighting the enemy is the recognition of its existence. Along with safeguarding the interest of Hindus everywhere, this Law will go a long way in legalizing the civilizational struggle of the Hindu society against its enemies.

This Bill will also have an impact on the Hindu psyche. Before going into the how, let me tell you an anecdote. On my temple trails, particularly across north India, I found a curious attitude amongst the villagers who inhabited around a great temple, now forgotten. Most of the ancient temples in north India are in ruins and are in the middle of nowhere, with often a few villagers knowing their exact location. And most often, they don’t call it ‘Mandir’, the common term to denote a temple in the north. Mandir is the term reserved for the modern brick and concrete structure, often ugly, with no antiquity. The ruins of the ancient temples are called ‘garhi’. ‘Garhana’ in Hindi means to create, or to sculpt. Owing to the profuse sculpture all over the walls of the ancient temples, they are called ‘Garhis’. And the villagers don’t go to these ruins. They would often advise me not to go to these ruins, as it is inauspicious.

At first, I ignored this, but when I started encountering this attitude too often, I realized something. The Hindu temple had been the first and the most obvious target of Islamic iconoclasm in medieval India, whenever an Islamic king defeated the local Hindu kings. Immediately after the victory, the temples would be destroyed, and the local Hindus massacred, particularly those who tried to defend the temple and the deity. Even then the Hindu society was so keen on defending its heritage and the living soul of the temple, that it would go to absurd lengths to preserve the vigraha of the deity of the temple. Dr. Meenakshi Jain, India’s historian par excellence explains this beautifully in her latest book, “Flight of the Deities”. S Vijay Kumar also explains how the temple priest would sacrifice everything just so that the dhruva bera, the primary icon of the deity would survive and continue to be worshipped.

But, no matter how much they tried or wanted, they could not save the outer structure, or the rest of the temple. Being immovable, the Hindu temple became an obvious victim to Islamic iconoclasm. When the Islamic hordes attacked the Hindu temple, the communities living around it and nourishing it were also at great risk. Gradually, the Hindu society must have learnt to save themselves and the dhruva bera by staying away from the great temples, thus keeping the deity alive, while saving themselves too in the process. This was the survival mechanism which saved the Hindu from the physical pain and the mental anguish that resulted from an Islamic invasion of India. This selective amnesia helped them survive.

This takes us to a greater wound. The Hindu identity, for centuries, was a painful burden to carry. Being Hindu was frustrating and demeaning. The socially conscious Hindu ran a great risk of falling into depression: there is so much death and destruction in Hindu history. What made matters worse, was that there was no light to be seen at the end of the tunnel. The past was dark, yes, but that the present held no promise, was even more painful. The secular Indian state, not just in denial of the plight of the Hindus, but in active persecution of it, had closed the last avenues of hope. The tunnel even in future, held no promise of light. The Hindu, in order to survive, closed his eyes, and started faking blindness, denying the very existence of sight.

As a result, the happy Hindu, more often than not, was a Hindu in cultural amnesia: a Hindu intentionally careless and unconcerned about his own history. That was his way to deal with reality: a rather stoical and almost spiritual way of dealing with an inconvenient truth: deny possession of things and even time; deny possession of history and the pain ceases to be yours. For what is not yours, cannot possibly hurt you. That is how the Hindu survived. By denying history. Facing it was simply not an option. The sheer magnitude of genocide and destruction that was heaped upon the Hindu society was simply too much to bear.

The modern era proved even more dangerous to the Hindu identity. Instead of being recognized as victims of the greatest Holocaust in the history of humankind, the Hindus were demonized as the perpetrators of mass murder. They were decried as fascists who were bent upon killing Muslims, simply because they happened to be in majority in one of the many pieces that India was divided into by Islam. This is why, the Hindu would abandon his identity as soon as a self-righteous Westerner, or a Muslim would blame him for it. First the pain of all the death and destruction; and then the monumental guilt of not being completely dead. No wonder, ‘spiritual, but not religious’ was a category that the Hindus accepted too readily.

The CAB changes this. For the first time, in a very long time, light appears at the end of the tunnel. The present is still painful in many ways, but the Hindu has never shied away from walking on a path of thorns for a better future. Now, when there is hope for a better future, the Hindu identity is suddenly not a burden anymore. Now when there is a promise that the Hindu culture will be preserved, Hindu history will be established and Hindu heritage will be preserved and recreated, the pain disappears and pride takes its place.

Being Hindu, which until yesterday was punished with humiliation, is now no longer so, and in cases of the refugees from Bangladesh and Pakistan, will even prove to be an advantage. Shri Ram Swarup, in “Hindu View of Christianity and Islam” consoles his readers. The present trend of secessionism is a symptom of a weak centre. As the centre becomes strong, as Maa Bharati starts calling again, those who considered their Hindu identity a matter of shame until yesterday would come back and proudly proclaim their Hindu identity.

The passing of the Citizenship Amendment Bill is the beginning of this hope.