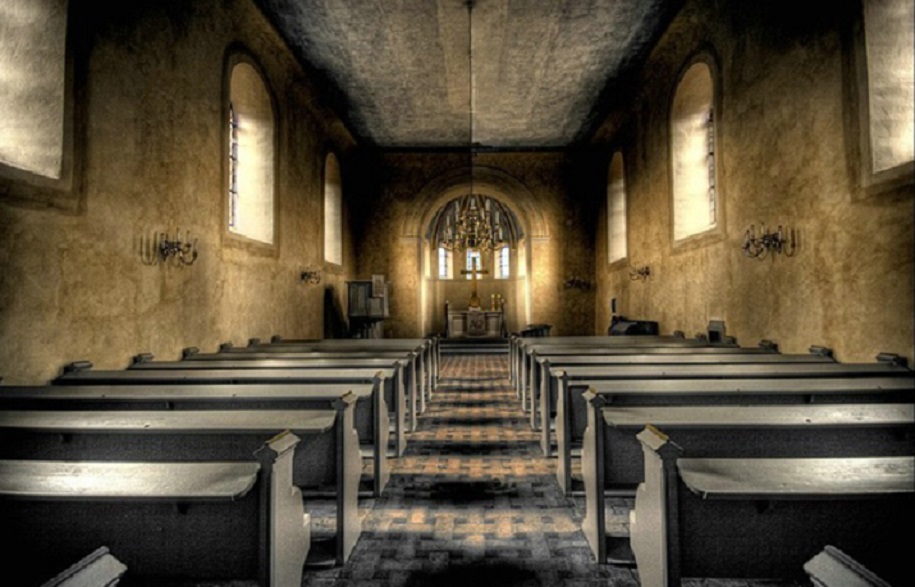 Is Christianity facing an exodus of, well, Biblical proportions? There are clear signs that the passion of Jesus’s followers in the West is ebbing and the congregation is losing critical mass.

A major new survey of more than 35,000 Americans by the US-based Pew Research Center finds that the per cent age of adults (ages 18 and older) who describe themselves as Christians has dropped by nearly eight per cent age points in just seven years, from 78.4 per cent in 2007 to 70.6 per cent in 2014.

Pew corroborates the American Religious Identification Survey which first studied the phenomenon. According to the 2009 Religious Identification Survey, the biggest decline in US church affiliation was concentrated in the north-east. This massive decline in the Mayflower heartland, where Christians first settled, has caused acute anguish among conservative Christian leaders who fear America will soon become a post-Christian country.

Of course, there is denial. Christian commentators like to talk about revolving door membership – that people quitting the traditional churches are signing up at Born Again denominations. Sure, more than 34 per cent of adult church goers today consider themselves Born Again or Evangelical Christians, but as the Religious Identification Survey says, ‘The challenge to Christianity in the US does not come from other religions but rather from a rejection of all forms of organised religion.’

Indeed, 27 per cent  of Americans do not expect a religious funeral at their death, indicating that they dismiss Christianity’s zero-sum offer of heaven or hell. In fact, there is a growing trend among Americans to opt for Hindu-style cremation.

On 28 July 2010 in a spectacular renunciation of her faith, celebrated Christian author Anne Rice announced on Facebook that she was quitting the Roman Catholic Church.

‘For those who care, and I understand if you don’t: Today I quit being a Christian. I’m out. I remain committed to Christ as always but not to being ‘Christian’ or to being part of Christianity. It’s simply impossible for me to ‘belong’ to this quarrelsome, hostile, disputatious, and deservedly infamous group. For ten years, I’ve tried. I’ve failed. I’m an outsider. My conscience will allow nothing else.’

In yet another celebrated case, in August 2010, 42-year-old Hollywood actress Julia Roberts declared she, her husband and their three children were practising Hindus. Roberts, who was born to Baptist and Catholic parents in Bible belt Georgia, is thought to have made the religious conversion while in India where she was shooting her film, Eat, Pray, Love, in which she plays a woman hoping to find herself through Hindu spirituality.

While these high-profile exits, coming shortly after the damaging exposes of rampant paedophilia in Christian churches worldwide, have no doubt caused disquiet in the over 2000-year-old faith, it is the less publicised but inexorable exit of once staunch members that is a pointer to the real crisis.

Across the Atlantic, Northern Europe is a virtual graveyard of abandoned churches. Further south, in predominantly Catholic Italy, over 60 per cent  of Italians have stopped attending confession. An entire generation of European Catholics has become indifferent – or openly hostile – to the church, mainly because of the sexual abuse of young children by priests.

In fact, there is a rapidly growing movement that seeks to rediscover the original and vibrant fertility religions of pre-Christian Europe, Wicca being the most well-known. (Incidentally Wicca practitioners, or witches and warlocks, were Europe’s medicine people. Falsely accused of black deeds, thousands of them were burned at the stake by the church.)

Born again Christians have long lived under the delusion that their storm troopers, a new breed of uncompromisingly fundamentalist pastors, are ready to kick in the doors and spread the Lord’s faith worldwide. They also believe their moral compass is perfectly tuned towards god. According to them, they are simply better human beings with special suites reserved for them in heaven.

But surveys have repeatedly proved there’s little measurable difference between the moral behaviour of churchgoers and the rest. Evangelist George Barna, the founder of The Barna Group, a market research firm specialising in studying the religious beliefs and behaviour of Americans, has found that born-again Christians are more likely to divorce than atheists and agnostics, and are more likely to be racist than others.

And while evangelical adolescents overwhelmingly say they believe in abstaining from premarital sex, they are more likely to be sexually active – and at an earlier age – than peers who are mainline Protestants, Mormons or Jews, says University of Texas researcher Mark Regnerus.

Christian activist Ronald J. Sider writes in his book, The Scandal of the Evangelical Conscience: ‘By their daily activity, most Christians regularly commit treason. With their mouths they claim that Jesus is their Lord, but with their actions they demonstrate their allegiance to money, sex, and personal self-fulfillment.’

However, the Christian church is not giving up without a fight. In 2009 in a debate on ‘The Uniqueness of Christ in Multi-Faith Britain’, Nezlin Sterling, general secretary of the New Testament Assembly, a black majority church, told the Church of England’s governing body, the General Synod: ‘There is no room for complacency, no room to procrastinate or retreat but like a mighty army of the church we Christians must go forward, spread the Gospel and the good news of salvation. Every person in my mind is a potential convert.’

While missionaries such as Sterling want to revert to their lapel grabbing mode, others have tried more creative methods. A pastor in New Zealand, hoping to arrest falling church attendance, delivers his Sunday sermon rap style.

However, it’s the Catholic Church’s charade of modernisation that is most comical. In March 2008, the Pope, playing God, announced seven new sins to be placed alongside the Biblical seven deadly sins.

To add onto Envy, Pride, Gluttony, Greed, Lust, Hate, and Sloth, the seven ‘mortal’ ones are: Environmental Pollution, Genetic Manipulation, Excessive Wealth, Inflicting Poverty, Drug Trafficking and Consumption, Morally Debatable Experiments, and the Violation of Human Rights. Observe that paedophilia has been conveniently left out.

Not going down without a fight

Like a virus that refuses to die but mutates into a more dangerous form, the nature of Christianity is changing too. The latest Pew survey says ‘evangelical Protestants, while declining slightly as a percentage of the US public, probably have grown in absolute numbers as the overall US population has continued to expand’.

Let’s not forget that despite steep decadal declines, there are still more than 225 million Christians in America.

Churches in the evangelical Protestant tradition – including the Southern Baptist Convention, the Assemblies of God, Churches of Christ, the Lutheran Church-Missouri Synod, the Presbyterian Church in America, other evangelical denominations and many non-denominational congregations – now have a total of about 62 million adult adherents. Says Pew: ‘That is an increase of roughly 2 million since 2007, though once the margins of error are taken into account, it is possible that the number of evangelicals may have risen by as many as 5 million or remained essentially unchanged.’

It is worth mentioning that several Presidents, lawmakers and other key decision makers in the US belong to the rabidly anti-Hindu Southern Baptist church.

Pew adds: ‘Similarly, the size of the historically black Protestant tradition – which includes the National Baptist Convention, the Church of God in Christ, the African Methodist Episcopal Church, the Progressive Baptist Convention and others – has remained relatively stable in recent years, at nearly 16 million adults.

According to the survey, over the same period, the percentage of Americans who are religiously unaffiliated – describing themselves as atheist, agnostic or ‘nothing in particular’ – has jumped more than six points, from 16.1 per cent to 22.8 per cent.

However, just because atheists are growing doesn’t necessarily mean tolerance will increase. The racist statements of evolutionary biologist and leading atheist Richard Dawkins about Indians in the wake of a horrendously racist documentary on a non-existent ‘rape culture’ in India should alert us to where the loyalties of some of these so-called atheists lie.

For, Dawkins and others like him are probably closet Christians, and use the atheism cloak in order to sell their books and get invited to sit at the high table of the scientific community. In fact, Dawkins has admitted he is a ‘secular Christian’ because he hankers after the nostalgia and traditions of the church.

In fact, the rise of Islamism in Europe is playing a key role in reviving Christianity. As Muslim numbers grow rapidly across Europe, Christianity could well be the unifying factor for white Europeans. For instance, UK Prime Minister David Cameron declared in April 2015 that Britain is a Christian nation. Cameron used his Easter message to the country to declare: ‘This is a Christian country.’ And he urged Britain to ‘speak out’ over the persecution of the faithful around the world.

In fact, during Easter 2014 Cameron had said that in a secular age Christians should be even ‘more evangelical’ about their faith.

Evangelical leaders like Cameron are fanning the ambers of a dying faith and are, therefore, more dangerous than openly sadistic forces such as the Islamic State. For, where the Islamic State has declared itself to be the enemy of all those opposed to it, including other Muslims, the likes of Cameron come wearing Armani suits and smarmy smiles. They try to penetrate countries in Africa and Asia for their trading activities but behind the merchants, the pastors follow. It is nothing less than a reprise of the East India Company and Robert Clive.

If the current trends hold, the Christian church could die a natural death by the latter half of this century. But if it wants to stay in the game, here’s a piece of advice:

Instead of being obsessed with the harvest of souls, the church needs to build a new order that values spirituality, which millions of former Christians have found in Eastern religions such as Buddhism (Hinduism’s export model) and healing systems such as yoga. It is indeed ironic that while the flock is seeking spirituality in the East, the church is seeking adherents in the same catchment area. Or is the church abandoning the questioning West and seeking converts in countries where people are (as yet) unaware of its human rights record?

As Anne Rice summed up, ‘People despise us, Christians, and think we are an ignorant and violent lot. I don’t blame them. This kind of thing makes me weep. Maybe commitment to Christ means not being a Christian.’

We are Tribals and we worship Goddess Durga