Girish Shahane’s myth-busting explodes in his own face 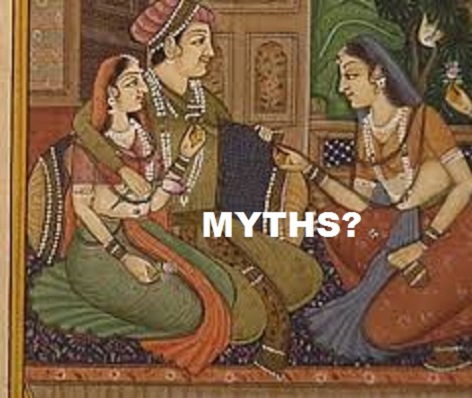 On the last day of 2014, Girish Shahane decided to be a mythbuster-I’m not saying this. They are his words wherein he purports to ‘debunk significant Hindutva myths.’ Mr. Sahane attempts in his so-called expose to correct our reading of history by clearing the air which was filled with clouds of Hindutva mythology. Let us look at Shahane’s myths and try to place them in the light of history.

As stated by Mr. Shahane :

Rani Padmini is not mentioned in any Rajput or Sultanate annals, and there’s absolutely no historical evidence she existed. Alauddin Khilji, one of the finest generals in India’s military history, certainly required no treachery to subdue Chittor. He repelled successive Mongol invasions while conquering much of Rajasthan and Gujarat. But what has survived of him is the image of a lustful, deceitful, tyrant pitted against chivalrous Rajputs…..

I think it is relevant here to quote this excerpt from page twenty seven of The History and Culture of the Indian People [Volume 6: The Delhi Sultanate]:

Alauddin Khalji’s lust for a Hindu queen is proved by the known instances of Queen Kamala Devi of Gujarat and the daughter of King Ramachandra of Devagiri.  It is to be remembered also that Abul Fazl definitely says that he gets the story of Padmini from ‘ancient chronicles’ which cannot obviously refer to the Padmavat, an almost contemporary work. On the whole it must be admitted that there is no inherent impossibility in the kernel of the story of Padmini……

Hence although the existence of Rani Padmini is not documented as a concrete historical fact, it is equally illogical to dismiss it as a myth simply because it is undocumented. Furthermore, Malik Muhammad Jayasi is celebrated as a Sufi philosopher even by the secular scholars of India. So, on what grounds Mr. Sahane is calling Padmavat a Hindutva conspiracy is best known to him.  And if he is so concerned, did Mr. Sahane take the initiative to debunk the secular myth of St.Thomas?

In the hands of Prithviraj’s court poet Chand Bardai, and several later writers who embellished the narrative, the chivalrous Prithviraj defeated and imprisoned Ghuri, but generously set him free. The foe returned, attacked unfairly at night, captured and blinded the Rajput king, and took him back to his capital. Prithviraj’s companion convinced Ghuri to let the blind king demonstrate his skill as an archer. Instructed by the companion, Prithviraj killed Muhammad Ghuri before ending his own life in a suicide pact.  I grew up believing this to be historical truth, thanks to the volume of Amar Chitra Katha about Prithviraj’s life.

Mr. Sahane seems to believe that the reputed court historians of Muslim rulers like Hasan Nizami (who wrote the Taj ul-Maasir)  Ferishta ( who wrote Tarikh-i Firishta and the Gulshan-i Ibrahim) and Al-Badāoni ( who compiled Muntakhabu-’rūkh) were story writers since it is in the works of these historians that one gets to read about Prithviraj Chauhan and his gallant clash with Muhammed Ghuri in the two battles of Tarain. If that is the case, then I suggest Mr. Sahane to go through Abu Mohamed Habibullah’s The Foundation of Muslim Rule in India, a standard work on the early medieval history of the subcontinent and learn about the Ghori-Chauhan clash instead of blaming Amar Chitra Katha.

[pullquote]Malik Muhammad Jayasi is celebrated as a Sufi philosopher even by the secular scholars of India. So, on what grounds Mr. Sahane is calling Padmavat a Hindutva conspiracy is best known to him.[/pullquote]

Of course, there are some elements of folklore about Chauhan’s personal life, a feature common to all great warriors of history from Hannibal to Napoleon. But how that equals to the non-existence of the historical figure itself is for Mr. Sahane to answer.

Ironically, Sri Lanka is one of the countries that Indian kings (Hindu ones at that, for in such a reckoning only Hindu kings count) have repeatedly invaded. The Cholas also launched naval expeditions against towns and regions across South-East Asia in the 11th century AD.Hindu rulers rarely hesitated to invade neighbouring domains, with all the killing and plunder associated with the business.

This practiced deception of balancing the religion-inspired wanton brutalities of Islamic invaders by trying to find similar parallels in Hindu rulers is a standard template used by most of our eminent historians who will go to any lengths to falsify the truth of medieval Islamic barbarism in India. Needless to say, one of the best practitioners of this balancing act is Romila Thapar who has been exposed by the erudite Arun Shourie in his book “Eminent Historians: Their Technology, Their Line, Their Fraud.”  A sample of this meticulous expose can be seen in this extract:

…. the most popular “evidence” for Hindu persecutions of Buddhism is a passage in Kalhana’s history of Kashmir, the Rajatarangini (Taranga 7: 1089 ff.), where king Harsha is accused of looting and desecrating temples. This example is given by JNU emeritus professor of ancient history, Romila Thapar, in Romila Thapar et al.: Communalism in the Writing of Indian History, p.15-16, and now again in her letter to Mr. Manish Tayal (UK), 7-2-1999. The latter letter was written in reply to Mr. Tayal’s query on Arun Shourie’s revelations on the financial malversations and scholarly manipulations of a group of historians, mainly from JNU and AMU…Note, at any rate, Romila Thapar’s total reliance on arguments of authority and status. No less than seven times does she denounce Shourie’s alleged (and unproven) incompetence: Shourie has “not the faintest idea”, is “unaware”, “untrained”, and “does not know”, and what he does is “laughable”, “a joke”, “garbage”. But what exactly is wrong in his writing, we are not allowed to know. If history is now a professional discipline, one couldn’t deduce it from this letter of hers, for its line of argument is part snobbish and part feudal (appeal to formal authority), but quite bereft of the scientific approach…….

(The complete article can be read here.)

Speaking of Sri Lanka, Mr. Sahane narrates only a part of the story when he mentions only the Chola/Pandya invasion of Anuradhapura while cleverly ignoring the chapters from the Sinhalese historical chronicles, which speaks of the kinship early Sinhalese kings had with the same Hindu rulers who Mr. Sahane identifies as violent invaders. He chooses to ignore the fact from the Sinhalese historical chronicle Mahavamsa which speaks of the early ages of the Anuradhapura Kingdom, when King Devanampiya Tissa (250–210 BC) was said to be friends with Emperor Asoka which led to the introduction of Buddhism by Mahinda (son of Asoka) around 247 BCE. Was that an act of violent invasion?  Throughout the ages, the Sinhala kings and their South Indian neighbours have often come to each other’s rescue in times of peril.

More importantly, Sahane fails to provide a single verifiable source which can prove that the cultural scenario of Sri Lanka and South-East Asia was brutally stamped out by Hindu rulers as was the case with India under Islamic invaders. But then, making evidence-less assertions seems to be a feature perfected by India’s eminent historians in whose footsteps Girish Shahane faithfully follows.

The first person to discover this language family, William Jones, suggested back in 1786 that Sanskrit, Latin and Greek, “have sprung from some common source, which, perhaps, no longer exists”. He was exactly right. That source is now called proto-Indo-European, and is considered to have been spoken in the vicinity of the Black Sea around 5,500 to 6,000 years ago.In India, though, the idea is anathema that an ancestor of Sanskrit was spoken by pastoral nomads living in what is modern-day Turkey and Ukraine. For that would make Sanskrit essentially a language like many others. Which is what it is.

If Mr.Shahane cares to do some research, he can find that the methodology of today’s linguistic research is largely derived from the work carried out by the ancient Sanskrit grammarians like Panini. Experts of linguistics have nothing but words of praises for the Sanskrit grammarians and linguists who had attempted to catalogue and codify the rules inherent to Sanskrit’s proper usage.

Also an important point to note here would be that European scholarship in Sanskrit which was carried by Heinrich Roth and Johann Ernst Hanxleden preceded the proposal of the Indo-European language family by Sir William Jones. The basics of modern linguistics employs many forms of the structures that evolved in the works of Sanskrit grammarians, but Mr. Sahane pooh-poohs all this without even citing one reliable source. Oh and on the so-called proto-Indo-European language, the words of perhaps one of the greatest contemporary Sanskrit linguists, Shatavadhani Dr. Ganesh should suffice: “proto-Indo-European language is a language in which there is the word “butter” but not the word “milk.”

[pullquote]The Sinhalese historical chronicle Mahavamsa  speaks of the early ages of the Anuradhapura Kingdom, when King Devanampiya Tissa (250–210 BC) was said to be friends with Emperor Asoka which led to the introduction of Buddhism by Mahinda (son of Asoka) around 247 BCE[/pullquote]

5. The Myth Of India’s achievements

In truth, almost nothing in India is 5,000 years old. … India’s major mathematical achievements originated almost exclusively in the medieval era.….

Over the past four or more decades, extensive research has been carried out by archaeologists and scholars in various other fields regarding the timeline of Indian civilisation. There are some passionate activists who advocate everything in the modern world originated in India. Sure, call them out on the basis of facts and evidence. But Shahane, you need to understand that in your childish zeal to deride even genuine Indian achievements that can be traced back to antiquity, you forget that such attempts show your own article in poor light. Consider the following examples:

1. The Śulba Sūtras which means ‘Aphorisms of the Chords’ in Vedic Sanskrit contain the earliest extant verbal expression of the Pythagorean Theorem in the world- The diagonal rope (akṣṇayā-rajju) of an oblong (rectangle) produces both which the flank (pārśvamāni) and the horizontal (tiryaṇmānī) <ropes> produce separately.1

Now the Śulba Sūtras are known to have been composed around 1750–500 BCE according to well-documented historical research. So how did Mr. Sahane reach the conclusion that ‘India’s major mathematical achievements originated almost exclusively in the medieval era?’  And as usual, he fails to furnish a single shred of evidence to prove this.

Indeed, Girish Shahane’s entire piece is an elaborate exercise in stating blatant untruths–or at best, unverifiable assertions about Indian history and expecting the reader to swallow them uncritically. It is a singular feat of valour indeed except that he shouldn’t have called it Hindutva history myth-busting. Here’s an accurate title for your piece, Mr. Shahane: Five Eminent Historical lies repeated.