Gravy Train of Eminent Historians about to end 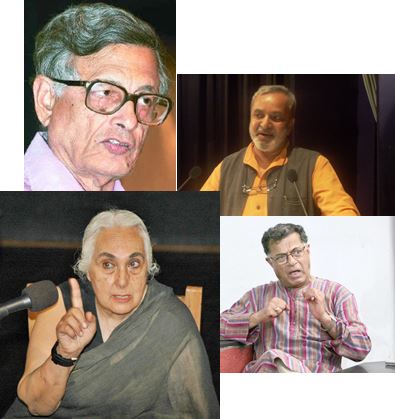 We seem to be living in unusual times. The meteoric rise of Narendra Modi more or less accompanied by the precipitous decline of the family that calls itself the Congress party seems to have let the cat among the pigeons of the secularist intelligentsia. A few weeks ago U.R. Ananthamurthy announced that if Narendra Modi became prime minister he would leave India and settle in a foreign country. He did not specify the unfortunate country he would move to but presumably it will be Pakistan (but far away from the Kashmir border). It was disappointing that no one appealed to him to change his mind and stay on; in fact many urged him not to wait for Modi’s elevation and leave immediately.

This was not an isolated case. Other secular luminaries calling themselves ‘intellectuals’ urged the UPA Government to form a committee (made up of themselves no doubt with generous funds) to correct the saffronization of history books in different states including Maharashtra, Karnataka, MP and others. Who are these concerned individuals? The usual suspects— Romila Thapar, Ifran Habib, Zoya Hassan, Girish Karnad, Ramachandra Guha and their ilk.

Among these only Professor Habib has any claims to be called a historian for his work on the economic history of Medieval India. (Zoya Hassan is more a political scientist than a historian.) Ramachandra Guha is a popular writer and Romila Thapar is a falsifier on a massive scale which she peddles as history. Girish Karnad is a charlatan who should be classified with Amartya Sen as a propagandist who thinks he can talk about anything while knowing nothing. A singular feature of this tribe is total ignorance of science. This is accompanied by ignorance of Sanskrit needed to study primary sources.

We see this most clearly in the case of Romila Thapar, widely projected as an expert on ancient India, especially the Vedic period. The extraordinary thing about her is she knows no Sanskrit, let alone Vedic Sanskrit. This means she can only follow English translations of Indian records like the Vedas and the Puranas, done mostly by colonial era scholars. This means her fifty year career as a historian of India is built on 19th century colonial scholars’ translations and perceptions. Her standing and influence as a historian was largely the result of the fact she is related to the Nehru family—Romila Thapar was close to her cousin by marriage. Indira Gandhi and could see her any time.

Romila Thapar’s pet theory of the Aryan invasion has collapsed, all her claims have been shown to be false, but her influence in political circles during the years of Congress power remains intact. Since the Congress going back to Mahatma Gandhi and Jawaharlal Nehru has been anti-Hindu and pro-Muslim, Thapar has used it to enhance her popularity and career (despite weak scholarship) by pandering to Congress’s anti-Hindu prejudices by falsifying history to portray Hindus as villains by whitewashing the Islamic period. This may be false history but it has paid rich political dividends. This is what other ‘intellectuals’ are also doing to get political patronage.

So what all these ‘intellectuals’ have in common is their capacity to pander to Congress politicians’ anti-Hindu prejudice and get government patronage and sponsorship. Girish Karnad is a master at that with Ananthamurthy not far behind. Sixty years of Congress domination has been a godsend to them. What they fear now is that the rise of Narendra Modi and a younger, more intellectually mature parivar, many who have excelled in scientific disciplines, may put an end to this gravy train. So they are running to illiterates like Sonia and Rahul Gandhi and immature brats like Akhilesh Yadav for support.

Circumstances after independence in 1947 favored such courtier-scholars. K.M. Munshi founded the Bharatiya Vidya Bhavan which produced the monumental multi-volume History and Culture of the Indian People under the leadership of the late R.C. Majumdar. But soon they were sidelined and power and influence passed into the hands of Nehruvians more skilled at politics than scholarship. Ever since that time Congress has driven away real thinkers like K.M. Munshi, C. Rajagopalachari and others like them.

In the years since the UPA came to power (2004) it has become clear that Sonia Gandhi’s loyalty and attachment to her family and friends (like Ottavio Quattrocchi) greatly exceeds her loyalty to her adopted country, if she has any at all. She ensured her hold over power by installing Manmohan Singh as Prime Minister and Pratibha Patil as President, neither of whom has any popular base and were not elected by popular will. She and her family members have no educational qualifications to understand what is going on in the intellectual arena. They neither understand nor care if history is distorted, as long as their dynasty is glorified above all others. This, their sycophants and the media are ever ready to do.

Now in its last stages, the party is in the hands near illiterates namely, Sonia Gandhi and Rahul Gandhi. No self-respecting scholar can work under such conditions. No wonder Dr. Abdul Kalam refused to have anything to do with it, withdrawing from the Nalanda University after Amartya Sen took control. This may be deplorable from an intellectual point of view, but it is tailor made for opportunists like Ananthamurthy, Girish Karnad and even Amartya Sen for all his intellectual pretensions. From this it is not hard to infer that Anathamurthy’s outburst against Narendra Modi was meant to attract the attention of Rahul and Sonia Gandhi.

These being uneducated non-performers, they tend to entertain and patronize courtiers and flatterers like Ananthamurthy and Karnad. These and other ‘intellectuals’ fear that Modi might get rid of this cozy arrangement and send them packing. Ideology and scholarship have nothing to do with their cry of saffronization. The cry is an expression of fear that the days of easy money in the name of secularism and saffronization may be over. If so, it is a welcome development, long overdue.