Ground report: The state of Hindus in West Bengal 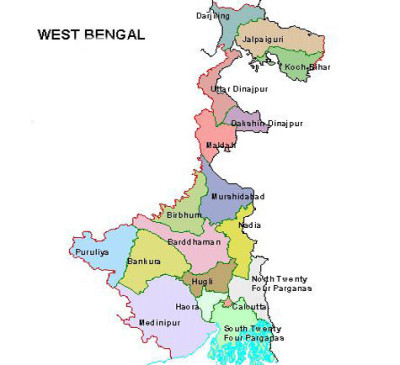 Note: This compilation was sent to the IndiaFacts team from ardent Hindu groups fighting an uphill battle against Islamist goons who with the support of the ruling dispensation has made life almost unlivable for Hindus in West Bengal. Note that this is only a partial, random list of attacks and atrocities against Hindus in West Bengal in the recent past.

Description – Attack on villagers for celebrating the swearing in ceremony of  Narendra Modi. 26 persons including one police official were received bullet wounds. 13 were treated at the local Khulna health center and 13 were taken to Kolkata hospital with serious injuries.

Description – Dulal Sardar of Golbunia village and 4 policemen were severely beaten up by the goons of Shajahan Seikh when returning from the Police Station, escorted by police.

Description – Rape of a newlywed Hindu woman Lakshmi Biswas (17 yr) by Baharuddin and  Saiful. Her husband works in Dubai. Now he is reluctant to take her back. The incident took place when she was (still is) at her widowed mother’s house.

Description – A small insignificant dispute. Muslims of neighbouring Imamnagar village attacked the house of Samar Saha, fractured his head, and beat up his wife leading to severe fractures on her left hand.

Description – A 25-year old Hindu housewife had been kidnapped and raped for 5 days by Sabid Ali, Usuf Ali and Pochu Mohammad in the house of Mir Mohammad.

Description – A group of Bangladeshi cow smugglers attacked and killed Nirmal Ghosh, a Rail Police constable.  His elder brother Paran Ghosh was injured when he tried to save his brother.

Description – A motorbike-borne gang of Shajahan Sheikh attacked and injured women and threatened villagers.  With serious injuries all over her, Smt Bindebala Sardar was admitted to the Basirhat Goverment hospital. 15 other injured persons have been pushed out of Rajbari Rural Hospital after the doctor got call from Shajahan Seikh.

Description – Local Muslims attacked a funeral party from Hajarpur village with bombs and bullets. Bikash Pal and Kesto Pal were grievously injured. The party had to flee abandoning the partially-cremated body of late Biren Pal to save their lives. After this, the attacking Muslims tried to encroach the Hindu cemetery at Arjunpur village.

Description – 25 BJP leaders and workers including Samik Bhattacharya, BJP candidate of Basirhat constituency, were beaten up by Shajahan Sheikh’s gang when they went to visit the family of the victim of gang rape.

Description – Gang rape of a 15 year old Scheduled Caste Hindu girl, daughter of a rice businessman, by Osman Mollah  and his 5 other goons. Before raping her, the Muslim miscreants looted Rs. 20,000 in cash, gold ornaments, two water pumps and other expensive items.

Description – Police stopped a 100 year old Hindu religious ceremony named “Charak Puja” and “Charak Mela” (fair) to satisfy the demands of Muslims. With the consent of the police, Hindus agreed to hold the program outside the boundary of the ground. When the Hindus gathered there on 14.04.14, a sizeable Muslim mob attacked them with arms and seriously injured many Hindus. A police officer (SDPO) was badly wounded. But the looting went on unchecked leaving several Hindus houses gutted. Police arrested 3 Hindus and 9 Muslims. However, the police was forced to free Maulavi Badaruddin who was the instigator of this attack on Hindus.

Description – Muslims attacked the Basanti Puja festival, broke the Basanti deity by kicking it, and ransacked the Puja pandal and launched an attack on the Hindus assembled there. In the process, they fractured Dilip Murmu’s head, injured many persons, and molested women. All the victims belong to the Scheduled Tribes. The notorious Anikul Islam, Sadikul Islam and Minarul Islam led the rampaging mob.

Description – When a Muslim thief named ‘Boba’ was caught red handed while stealing a cow from the house of Sushil Das, a Muslim mob of 200 led by local Congress leader Zakir Hossein attacked the village Sihipur inhabited by SC (Hari) Hindus. More than 40 Hindus were injured, women were molested, money and valuables were looted by the Muslim mob.

Description – Renowned businessman and a leading personality of Hindu society, Kartick Methia was brutally murdered by hired Muslim goons of Mohammad Raja Sheikh. Kartick Methia was courageously leading the local Hindus to resist the efforts of an illegal construction of a mosque on a Hindu ground named “Rashmath”.

Description – Hindu Samhati workers were attacked by goons of Shajahan Sheikh. Amay Bhunia and Paresh Mandal seriously injured inside the TMC party office. The police arrested the victims instead of the perpetrators.

Description – A Muslim procession on the occasion of  Viswa Navi/Nabi Divas (the birthday of Hazrat Muhammad)  forcibly entered Hindu villages beyond the sanctioned route by local administration, and attacked the Hindus there. Massive destruction and large scale violence took place. The processionists damaged four Hindu temples including one large Harisabha, looted, ransacked and gutted many Hindu houses, shops and agricultural lands. A total of about 100 Hindu houses, establishments and 4 temples were damaged and ransacked. Hindu women were abused and molested.

Description – Smt. Sarathi Maity, wife of the local fish vendor Sankar Maity, was attacked by Rafik Seikh, Jamaal Seikh and Lutfar with sharp weapons. Her head was fractured, and she was molested by the goons.

Description –The  Durgapuja immersion procession was attacked by armed Muslims after being provoked by loudspeakers of the local mosque. 10 Hindus were injured. Among them, an Army Jawan Anil Mandal’s injury very serious. He had to stay in the ICU in the Command Hospital in Kolkata.

Description – About 5-6 Muslim families slaughtered five cows for the first time in the presence of the BDO and Police. Hindus protested. In retaliation, Shajahan Seikh’s goons ransacked Hindu shops at Rampur Bazar and beat up Hindus. Muslims also attacked many Hindu villages

Description – The shop and residence of Kamal Bishai was completely looted and ransacked by Muslim goons. Gold, cash and other articles worth Rs. 2 lakh were also looted.

Description – Muslims attacked Hindu houses in the Gabbunia village. Their fault – they went to Kolkata to join a program of Hindu Samhati. 23 houses damaged, materials looted worth lakhs of rupees. Many injured. Tapas Naskar was shot in the leg and seriously injured by Ali Akbar Seikh. Smt. Sulata Ghosh (sister of Tapas) was fully stripped and molested. A few other Hindu women were molested as well.

Description – Dispute between Hindus and Muslims over illegal mining of coal. Result – On February 7, 2013, a Hindu woman was beaten almost to death by Muslims inducing Hindus to opt for a peaceful blockade of road. This peaceful Hindu protest was avenged by savagery on the part of the neighboring Muslims of village Sahapur. Hindu houses were set to fire followed by molestation of Hindu women and beastly thrashing of Hindus in general. While more than 40 Hindu houses and shops were burnt down, other households were looted. Hindus in the area now maintain a hand-to-mouth existence.

While this devastation was going on, Hindus phoned the local police station. Police came but remained silent spectators.

Description – To avenge the murder of the Imam of a Kolkata mosque by unknown assailants, 200 truckloads of Muslims from distant Kolkata and  other places attacked these 4 villages and ravaged, looted, gutted Hindu houses and establishments. The Police were again meek spectators. In fact, the rioters took diesel from the police jeeps to burn the Hindu houses.

Description – Smt. Krishna Banik, a Hindu housewife, while returning from Kolkata, was forcibly abducted by the Muslims at Mollar Chak and raped. The culprits also looted Rs. 8000 which she was bringing for her daughter’s marriage.

Description – 19 shops owned by Hindus were looted in the market of Priyor Mor by Muslims.

Description – To retaliate the murder of a SUCI Muslim leader, Muslims resorted to large scale violence. They looted and gutted about 100 Hindu houses of these 2 villages.

1. Hundreds of such incidents of Muslim atrocities against Hindus are occurring every month all over West Bengal. Neither the administration nor the police takes cognizance of these atrocities.

2 : I would like to mention an incident of another person if only to show the number and might of Fundamentalist Muslims and West Bengal state administration.

The former Judge of Calcutta High Court, a former renowned lawyer, and a sitting minister of the TMC Government led by Mamata Banerjee, Mr. Nure Alam Chowdhury was shackled, beaten up, and remained hostage for eight hours by fundamentalist Muslims at his own place Margram. His forefathers were zamindars there for seven generations.  His girl’s college named after his mother– the Asaleha Girl’s college–was set on fire, completely gutted and now remains closed. The new building has been encroached by a mosque.

The reason behind this attack/anger, which no media mentioned, was that his wife Mamtaz Sanghamitra, a Hindu convert, during the 2013 Eid Namaz, successfully made arrangements for Muslim women to offer Namaz collectively on an open ground like male Muslims.