Haider: Hamlet without the prince 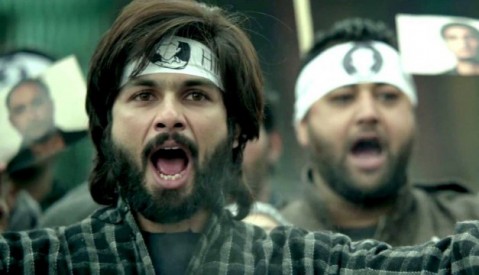 Jesus cautioned the faithful about the menace of charlatans, saying “Beware of false prophets, which come to you in sheep’s clothing, but inwardly they are ravening wolves.” A couple of millennia down the line, the danger has magnified a million times, as it is not only the apostles of evil who deceive and delude people but also the intellectuals who, perhaps unwittingly, end up as the propagandists for jihad—the greatest threat to civilization. Vishal Bhardwaj (director and writer) and Basharat Peer (writer), by depicting the separatists as oppressed freedom fighters in the movie Haider, have proved to be the useful idiots of Islamists. Worse, Bhardwaj and Peer have even used and abused Shakespeare and the revolutionary poet Faiz Ahmed Faiz (whose poems add to the backdrop) for the purpose.

So, unsurprisingly, the only good people in the movie are Islamists—the protagonist Haider (played by Shahid Kapoor) and his father, Dr. Hilaal Meer. For the former, Anantnag is Islamabad and the Indian Army is a barbarous occupation force, while the latter finds nothing wrong in helping terrorists. And the bad guys are security personnel, who routinely pull out the nails of illegally detained innocent Kashmiris and murder them in cold blood. Besides, there is the dreadful Armed Forces (Special Powers) Act or AFSPA. This is the Hurriyat narrative, beautified and beatified by Bhardwaj, Peer and Co., and unduly sanctioned by film critics who have generally called it an excellent rendition of Hamlet.

The film, claimed to be “an adaptation of William Shakespeare’s Hamlet,” begins with the arrest of the protagonist Haider’s father. He is guilty of treating a terrorist. Haider (the Indianized Hamlet) is crestfallen, not just because of the arrest and disappearance of his father but also his paternal uncle Khurram’s intimacy with his mother (Ghazala, played by Tabu); eventually, the duo marry, further infuriating Haider.

Meanwhile Haider’s search for his father proves to be futile. While Hamlet was informed about his father’s murder by the latter’s ghost, Haider came to know about the detention, torture, and extrajudicial killing of his father by a mysterious, almost ghostly, person Roohdaar (Irrfan Khan). Roohdaar, a separatist who was incarcerated along with Haider’s father, also tells the son how Khurram (Kay Kay Menon) had betrayed his father. He delivers Hilaal’s message that Haider should shoot Khurram in his eyes.

There are a lot many Shakespearean elements in the movie: Haider eschewing from killing Khurram while he is praying, the mousetrap technique, black humor at the graveyard, treachery of two of Haider’s friends, a number of killings, and so on. Yet, it would be misleading to say that Haider is “an adaptation of William Shakespeare’s Hamlet.” The characteristic Hamletian dilemma—‘to be or not to be…’—is missing; the soul is missing; it is Hamlet without the prince of Denmark. At best, Haider has some resemblance with Shakespeare’s Hamlet, nothing more than that, nothing Shakespearean. Certainly not an adaptation of Hamlet.

As Bhardwaj said in an interview to The Indian Express, “In my film, in a way, Kashmir becomes Hamlet.” Now, this is an extraordinary, outlandish twist to the definition of tragedy. According to Encyclopedia Britannica, tragedy is the “branch of drama that treats in a serious and dignified style the sorrowful or terrible events encountered or caused by a heroic individual.” Technically speaking, tragedy is about individuals, not collectives. ‘To be or not to be…’ is replaced with facetious rhetoric like ‘Hum hain ki naheen hain.’

Further, Bhardwaj overdid the Oedipus complex thing. Tabu anyway does not look or behave like a Nirupa Roy. The relationship between Haider and Ghazala has a tinge of sexuality in it. But there is no such hint in Hamlet. Yes, Sigmund Freud did talk about this complex, but I don’t think for three centuries between when Hamlet was played and Freud propounded his sex-oriented theories that anybody made such a claim.

The actors have done well, especially Tabu and Shahid Kapoor. The cinematography is good. At any rate, Bhardwaj is among the better directors Hindi cinema, so even his worst is better than the best of David Dhawan and Rohit Shetty. In his latest endeavor, however, Bhardwaj has failed miserably on more than one front.

For Bhardwaj’s understanding of Hamlet is as shallow as his understanding of the situation in the country in general and in Kashmir in particular. Let’s begin with the Indian state’s response to insurgency, uprising, or any other law and order issue. Doesn’t he know how our law enforcement agencies deal with insurgents and criminals? How did the security personnel deal with the Khalistani militants? Were they interrogated using kid gloves? Weren’t there encounters and extrajudicial killings? Are the apprehended Maoists treated in accordance with the norms prevalent in Scandinavian countries? Even petty thieves, or even the poor men suspected of any wrongdoing, are brutally thrashed by the cops. All this not nice, but this is how it is. After Independence, our political masters should have altered the governance paradigm and drastically reformed the police and justice systems, but they did not. This is unfortunate, but for all of us not just for the Kashmiris. But by focusing on the treatment meted out to the Kashmiris suspected of aiding terrorists, Bhardwaj has presented a distorted picture; it is like showing an unlovely spot near the Dal Lake and claiming that Kashmir is ugly.

But the bigger blunder is accepting the Hurriyat interpretation of the Kashmir issue hook, line, and sinker. Bhardwaj, like most liberals lauding his movie, refuses to examine the content of azaadi (freedom) that Hurriyat leaders want. By the way, the word ‘hurriyat’ also means liberty. So, on the face of it, one might be tempted to acknowledge the outfit and their sympathizers as freedom fighters. Besides, postmodern relativist ethics has it that one man’s terrorist is another’s freedom fighter. Ergo, Hurriyat chaps are freedom fighters.

Such a conclusion is the consequence of faulty premises and fallacious syllogism; and the faulty premises are the result of ignorance. Evidently, Bhardwaj can’t see through the smoke-and-screen world of jihad for the simple reason that he lacks the prerequisite erudition and profundity to do that. When Satyajit Ray makes Shatranj Ke Khilari, he knows not only the craft but also the history, culture, and ethos of India as well as of the West. He depicts the rendezvous between the East and the West in an excellent scene in which the actor David visits the nobles Sanjeev Kumar and Saeed Jaffrey playing chess. The scene is the crystallization of Ray’s discernment of the rendezvous, a discernment that is the product and function of immense scholarship and contemplation. Bhardwaj simply lacks erudition and perspicacity. Sunil Gavaskar’s comments on the RBI’s monetary policy and Amartya Sen’s on the intricacies of quantum mechanics would be more substantive Bhardwaj’s take on Kashmir.

So, it is not surprising Bhardwaj is unable to acknowledge the fact that the ultimate objective of Kashmiri separatism is an Islamic state; it has always been. Priyanka Bakaya and Sumeet Bhatti of Stanford University wrote in Kashmir Conflict: A Study of What Led to the Insurgency in Kashmir Valley & Proposed Future Solutions, “In 1980, the Islamization of Kashmir began with full force. The [Sheikh] Abdullah Government changed the names of about 2,500 villages from their original names to new Islamic names. For example, the major city of Anantnag was to be known as Islamabad (same name as the Pakistani Capital).” So, the protagonist in Haider has internalized the jihadist geography.

According to Bakaya and Bhatti, “The exact role of Saudi Arabia cannot be known due to lack of evidence currently, but there are clear indications showing their influence. Many Saudi religious personalities and scholars held an Islamic Conference in Srinagar in 1979 and visited often thereafter. Further, they set up the Jhelum Valley (JV) Medical College in 1980, through which they were able to funnel large sums of foreign exchange money into Kashmir… Anecdotal evidence suggests it was the doctors in this hospital that began spreading the message of radical Islam and communalism.”

Kashmiri leaders also spewed venom against the Hindus. The Sheikh began giving communal speeches in mosques as he used to in the 1930s. Further, in his autobiography he referred to Kashmiri Pandits as ‘mukhbir’ or informers of the Indian government, wrote Bakaya and Bhatti.

The Islamization pattern in Kashmir had a familiar trajectory. The Saudi money established facilities such as madrassahs that, according to Bakaya and Bhatti, “trained jihadis in the region. From the early 1980s, madrassahs started spreading throughout the Kashmir Vale, and these institutions planted the seeds of Islamic fundamentalism in Kashmiris from an early age. Children were instructed to ‘fight for Islam,’ and hatred for their Kashmiri Pandit counterparts was bred extensively.”

The denouement was the expulsion of three lakh Pandits from their native place. Ethnic cleansing continued relentlessly; on March 20, 2000, three dozen Sikhs were massacred at Chittisinghpura in the Anantnag district. Ten years later, in August 2010, they received anonymous letters from Islamic militants asking them to either quit the Valley or embrace Islam.

Christians have fared little better. Three years ago, a Christian priest was accused of forced conversion in Jammu & Kashmir by the state’s grand mufti. Imagine the tempest that would follow if the chief minister of a state ruled by the Bharatiya Janata Party were to appoint a Shankaracharya and seek direction for social and cultural policies. Rank communalism, vile regression, beginning of theocracy, assault on secularism—this is how our liberals would greet the move. They would vehemently campaign for the status quo.

But when it comes to Kashmir, all the grand notions about keeping the state and religion apart are given a silent burial; a conspiracy of silence entrenches itself. But the J&K government, in which the super-secular Congress was a partner, actually appointed a Grand Mufti. Yes, Mufti Mohammad Bashiruddin heads the Supreme Court of Islamic Jurisprudence in Kashmir. The mandate is obvious: to implement Shariat, which is the antithesis of all that the Indian Constitution and modernity stand for.

The grand mufti is no titular figure; he is an activist. He has a court, in which he summoned Pastor C.M. Khanna following allegations of his involvement in forced conversions. Khanna has denied the allegations. In a state where jihad is writ large, one has to be immensely credulous to believe that Muslims can be forcibly converted to Christianity or, for that matter, any other faith.The same grand mufti forced Pragaash, an all-girl rock group from Kashmir, to be disbanded in February 2013. Typically, he had denounced their music as “un-Islamic.”

So, this is the azaadi the separatists are fighting for—where non-Muslims would be either kicked out or forced to convert to Islam, women would be pressured to follow the diktats of medievalist clerics, music would be banned, and all the abominations associated with an Islamic state would be introduced.

It is a strange, frightening world we live in: theocracy assumes the guise of self-determination and democracy; slavery masquerades as liberty; and liberals do not (refuse to?) even notice the trick.

Worse, liberals like Bhardwaj actually wallow in their ignorance. Using his mastery over the craft of cinema, he just bestows a verisimilitude of veracity and legitimacy to the jihadist narrative.