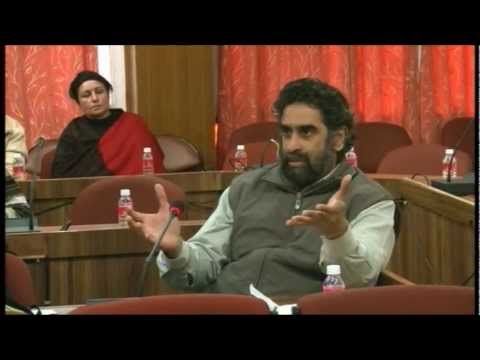 The Indian Prime Minister Narendra Modi often remarks jokingly, that many journalists and media companies would have to shut their shops if they don’t carry on their hate campaign against him. The now-editor of Carvan, Hartosh Singh Bal is easily one of such shop owners who wouldn’t have a career if he didn’t sell his inventory of anti-Modi habiliments on an ongoing basis.

Bal’s clan fortunately for India is dwindling but in a last-ditch effort to save the ship from sinking into the ocean of ideological and moral putrefaction, the Bals of the world are hitting the rancid waters with their ores of fabrications. This is why you see a Rajdeep Sardesai mocking at and getting into a public brawl with Indians settled in the US who don’t subscribe to his anti-Modi “views.” And now, a Hartosh Bal “advising” the US government to maintain a safe distance from Narendra Modi due to his “past”. These are signs of desperation and frustration. These are also signs of a sinister mindset.

In the present article, Hartosh counsels the US government to practice caution while striking new alliances with Narendra Modi in particular and the BJP in general. He reminds the Americans in case they have forgotten, why Modi was denied entry to the United States and how the very same reasons still stand irrespective of the thumping and unprecedented endorsement the PM has received both politically as well as personally. While sharing his wisdom and cautioning the US government, Bal totally ignores the fact that no Indian court has convicted or has been able to convict Narendra Modi and even the committee set up by the Supreme Court didn’t find any evidence of his involvement in the unfortunate events that unfolded in 2002.

But then, who cares for truth and the country’s justice system when the survival of one’s shop is at stake? As phony secularists often say, “What’s the use of development if you don’t feel safe in the country?” while trying to conjure up a doomsday scenario for the Muslims of the country under the Narendra Modi government. Following their own logic, this translates to: what’s the use of the verdicts of the courts if they don’t suit your purpose?

What do people like Hartosh Bal stand to gain by broadcasting their ululations interminably? The recent elections have shown that their decade-long  propaganda of vileness has failed miserably. In their limited stock of intellectual and journalistic skulduggery they have used practically everything and now the only option left to them is repetition. Keep repeating the same old lies again, and again, and again, even if they don’t achieve anything. They have to show to their political masters that they’re doing something. Like a pet hamster, they are running in the wheel of lies they have created for themselves just to pretend to do some sort of activity.

More evilly, they’re also trying to instigate unrest in the society. What journalists like Hartosh Bal fear the most is irrelevance. So they are writing provocative articles even to the extent of writing completely outlandish pieces, expecting some sort of retort from Narendra Modi or his supporters so that they can scream to the world that look, we are being targeted for speaking out. This is in the fond hope that they can gain instant stardom.

Indeed, this was what Rajdeep Sardesai, the practiced Modi hate-monger was trying to achieve during Narendra Modi’s US visit but the entire fiasco backfired with the original unedited video surfacing on the Internet that shows that he was the one who mounted the physical assault. The same video also showed that it was the so-called Modi-bhakts who exercised restraint and prevented the situation from getting out of hand. Let’s also not forget that Tarun Tejpal, the infamous managing editor of Tehelka—now facing rape charges—won the International Premio Hemingway award in Italy for “outstanding journalism from a conflict zone” – the rackets these people run in the name of “fearless journalism” are unlimited.

The goodies that ensue from such racketeering is also one of the reasons why writers and journalists of the ilk of Hartosh Bal feel emboldened. If they are attacked, intellectually, legally or in the rarest of the rare scenarios, physically, they will receive instant victimhood. Suddenly awards will rain down upon them. The floodgates of “secular” opportunities will be opened all over the world, especially in the western, left-dominated world of the media and academia. Book deals will be signed. Grants will be given. They will be called to various conferences to deliver lectures on how repressive and anti-minorities the current Indian government is, and so on.

When your entire career is based on manufacturing and propagating lies, you don’t develop the habit of doing the actual work, which is hard and which takes integrity and where no rewards and awards are guaranteed. Hence the easy way: keep writing stuff that you have been writing for decades, keep regurgitating stuff that has been written for decades, spin a few words here and there to make your stuff appear original or topical and there you have it, another hallmark of “unrelenting journalism in pursuit of truth and justice”.

In this so-called pursuit for justice, they have now plummeted to such depths that they don’t even realise whether they are writing for their own country or serving the interests of another country, even an enemy country. It’s hard to even imagine the kind of mentality you must have in order to urge another country not to trust and strike up alliances with the PM of your own country. But expecting such decency from people like Hartosh Singh Bal would be expecting the Moon.

The funny part is that people like Bal are so conceited that they have gotten themselves into believing that what they say matters. Why would the US government care what he or anybody like him has to say about Modi? International relations don’t hinge upon rumours and hearsays let alone rabid and fraudulent pieces. If forming alliances with Narendra Modi goes counter to the US interests, they will maintain a distance, and if it is in their interest, no matter what these weeping Cassandras have to say, they will go ahead and form every alliance possible under the sun.

There’s no nice way of saying this: how does Hartosh Singh Bal even face himself in the mirror?