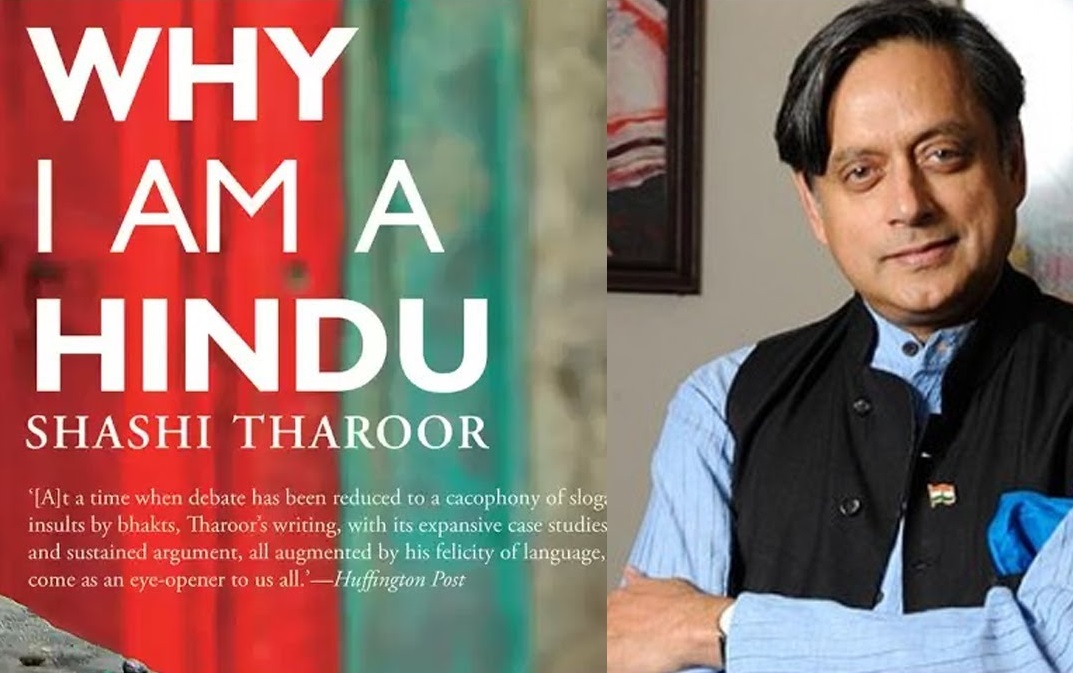 Shashi Tharoor is an erudite author and his English prose is eminently readable. He generally makes sense in his views and opinions on many issues, in spite of being a Congress politician. But his recent book “Why I am a Hindu” appears to be quite disappointing and superfluous, if one were to go by his speeches and interviews promoting it. The ideas in the book are solely aimed at discrediting Hindutva as something alien to Hinduism proper and hence illegitimate. This whole premise is baseless, dubious and deceptive.

For decolonized and self-conscious Hindus, this whole ‘debate’ about Hinduism vs Hindutva is artificial, pointless and divisive. Even if one manages to define these two terms with certain characteristics peculiar to each of them, that would be more of ‘traits’ rather than two separate and watertight categories. For example, how would one classify Vijayanagara Empire and Shivaji’s Hindu Padshahi? Hinduism or Hindutva? Without these movements, the very survival of Hindu religion and culture in many parts of the country would not have been possible. Shashi Tharoor would have been born as Shahul Hameed, and Ramachandra Guha as Rahman Gafoor, had these developments not happened in history. And even today, Hindu religion and Hindu communities face such dangers and threats from the aggressors and enemies of Hindu Dharma, both within India as well as in other parts of the world. To ignore and downplay this sense of history as prescribed by these self-delusional ‘erudite’ writers and their cohorts is suicidal for Hindus.

The same confusion would elude regarding say, Swami Vivekananda and Sri Aurobindo too. For that matter, even regarding Sankaracharya’s consolidation of Advaita Vedanta and his iconic Digvijaya, the all India tour, Ramanuja’s tireless Bhakti mission and institutionalization of Sri Vaishnavam, Basavanna’s Veera Shaiva teachings and Ramcharitmanas of Tulsidas uniting all Hindus of North India cutting across castes, sects and language dialects. Are these Hinduism or Hindutva? In the case of Swami Vivekananda, we already see Jyotirmay Sharma, an anti BJP academic putting him under Hindutva, but Shashi Tharoor under his brand of ‘non-Hindutva Hinduism’, whatever that means.

Debates around this theme are intentionally engineered in the media by Nehruvian secularists and Leftists of late, and the recent book by Tharoor also belongs in this category. These anti-Hindu ideological camps are desperately watching the crumbling of Nehruvian, Leftist, Secularist dominance in all spheres of India’s national life, not just in politics and economics, but also in social and cultural affairs. Their original narratives of ridiculing, dismissing and neglecting Hinduism as an old relic of the past or nothing more than a bundle of superstitions and caste evils, in their vintage style will no more work now. Such discourses will be frowned upon in today’s India and will spell disaster for their political ambitions. The fact of the matter is that Hinduism has proved to be far more enduring in the 21st century India compared to the silly 20th century fads like Nehruvian socialism, Marxism, Liberalism or various hues of Socialism. That is why the posturing as to we are ‘more Hindus than Modi and BJP’.

There is a calculation that such posturing will find favor with many ‘common’ Hindus and ‘spiritual’ Hindus, who allegedly associate Hindutva negatively with violence and bloodshed, but Congress brand of ‘secular Hinduism’ (never mind the term being oxymoronic) with peace and harmony. This is because, a large majority of ‘common’ Hindus have already been swayed by the successful rosy propaganda of ‘No bloodshed Hinduism’ over decades. “Hinduism has been facing any number of onslaughts, but nothing could destabilize it. Because it is not a religion established by someone. It was neither propagated zealously, nor defended with bloodshed. It is a way of life… the current trend of Hindutva hooligans claiming to safeguard Hinduism, if left unchecked, will definitely besmirch the spiritual core of this age old tradition”. We often come across such a refrain from many such ‘common Hindus. But, is this fully correct?

Hinduism being spiritual and non-propagating is true. But “not defended with bloodshed” is plain wrong. True that Hindus have not caused bloodshed due to their aggression on others. But let us not forget that we had to shed lot of blood to defend our religion from the onslaught of aggressive Abrahamic religions. How can one explain why Hinduism was saved in spite of thousand years of Islamic aggression, when all other countries and civilizations that came under Islam’s sword were simply wiped out without any trace of their ancient culture? Was it by some magic or some strange spell? No. It is because generations of our ancestors shed their blood to defend and safeguard it. We remain Hindus today only because Vijayanagara Empire, Rajputs under Rana Pratap, Marathas under Shivaji, Ahoms under Lachit Borphukan, Nayaka warriors of the South, Gajapatis of Odisha, Sikhs under Guru Gobind Singh and countless other Hindu brave men and women continuously fought and died, over centuries. Our great Gurus and sages guided us in this long struggle. Let us not insult their sacrifices by denial. Yes, ultimately there is the supreme divine force of Dharma guiding such a course of history. But, there has to be a realistic human action, with the spilling of real blood and sweat to manifest that divine Dharmic force in the real world. This should be understood without any confusion or ambiguity by all the Hindus.

The 19-20th century Hindu resurgence and the Hindutva politics are nothing new, but a continuation of this history. One can criticize specific threads and strains in it, but to deny it completely is detrimental for Hindus. Such denial is born out of a certain self-hypnotization coupled with a deeply colonized mindset. What this mindset lacks is sense of history and social consciousness, but it tries to disguise that with ambiguous notions of spirituality and harmony.

The main aim of the ‘Hinduism vs Hindutva’ narrative is to confuse Hindus who, after a long slumber have woken up to respect their religion, to fight for their rights and honor, to have a sense of their own history, to proudly proclaim their religious affinity without shame and to gain political consciousness. The ascent of Narendra Modi in 2014 despite so much anti-campaign against him and the BJP is only the first step towards the next wave of Hindu renaissance in Indian politics. There is still a long journey. The reactionary shouts like the book by Shashi Tharoor are nothing more than feeble attempts to counter this march, and they are doomed to fail.

The term Hindutva is a lofty one and is any day better than the Colonial term ‘Hinduism’, for that matter. The Sanskrit suffix ‘tva’ indicates essential nature, unlike the suffix ‘ism’ which is usually applied to ideologies, theories or philosophical and artistic fads, like Communism, Fascism, Impressionism or Existentialism. Just to give a comparison, what would a practicing Christian prefer to call his religion as – Christianity or Christism? Obviously the former and not the later. Technically, the same argument applies to Hindutva vs Hinduism too. But again, we don’t want to unnecessarily vilify the term Hinduism on this silly point, as it has already become popular all over the world to indicate our timeless religion. So we embrace it wholeheartedly without worrying about the schism regarding ‘ism’ in a similar way, why should Hindus belonging to non BJP parties be asked to vilify and hate the term Hindutva?

Hindutva represents an essential social, political, cultural and historical consciousness of Hinduism rooted in its Dharmic and spiritual core. It is never alienated from it. The likes of Tharoor and Guha desperately try to give it a limited meaning associating with RSS/BJP politics alone. Such caricaturing is only aimed at weakening the above said consciousness for narrow and selfish political motives and to create yet another wedge among Hindus on ideological lines. This is not just plain wrong, but very dangerous for the wellbeing of Hinduism the religion, and Hindus, its adherents. Instead, Congress should adopt the word Hindutva and convince us why they represent better Hindutva compared to Modi and BJP.

“The question is”, said Alice, “whether you *can* make words mean so many different things”.

“The question is”, said Humpty Dumpty, “which is to be the master – that’s all”.

Jataayu has been writing on a range of topics centered around Hindutva, cultural and social issues and current affairs since 2005, mostly in Tamil and occasionally in English. He is well read on Hindu philosophy, history, culture, literature and arts. He is a scholar of Tamil literature, especially Kamba Ramayanam. A collection of his Tamil essays has been published as a book 'Kaalamthorum Narasingam' (2015). He is one of the founders and editors of tamilhindu.com and also the Tamil monthly magazine Valam. An Electronics Technology professional by vocation, he is currently a resident of Bengaluru. His real name is Sankara Narayanan.