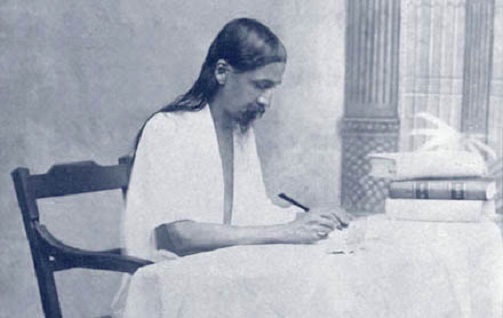 In pursuing an English private school education in 90’s urban India, one thing that was quite natural for a student like me, was developing a sense of admiration for Western thought, culture and way of life. In literature, Shakespeare was held as the ultimate, in science Stephen Hawking was revered and in art and culture, Hollywood set the bar. The admiration seemed to be validated by the West’s leading position in technology, economics and general quality of life as it appeared. But in recent years, spurred by the Great Recession and the political turmoil unfolding in the West, the world has been slowly brought to the realisation that the economic and technological development spearheaded in recent centuries by the West, has not, despite all the wonderful conveniences, resulted in a happier world or more fulfilled human beings.

Our current times are one of information overload, stress-ridden workplaces, competition and consumerism. Shockingly, one in six Americans is on psychiatric drugs and according to Gallup, the world faces an ‘engagement crisis’, with only 13% of employees worldwide determined as being engaged in their work. More than a billion people (roughly one-fifth of the world’s population) live in communities that do not meet the World Health Organisation’s air quality standards. And what are the West’s proposed solutions to these issues? Well, they are generally in the nature of Band-Aids, clever abbreviations, jargons, and statistics. For the severe, existential challenges like overpopulation and natural resource depletion, we find that the answer is to abandon ship altogether – but on Mars. Elon Musk’s SpaceX is working on colonising other planets so that we can escape from our failures on planet Earth altogether.

To address issues of human life and work, the West has traditionally clung to psychology, economics and management theories. Should you encounter mental health issues for instance, many companies will proudly pay for your psychiatrist sessions and anti-depressants. While living in France, I was amazed at the casualness and routineness with which people claimed psychiatric sessions through their state health benefits – sometimes, it seemed, mainly because of an unwillingness to let claimable benefits go unused! For those with a somewhat more robust mental constitution, affirmations and positive thinking are the names of the game. “Embracing failure”, “loving yourself”, “keeping calm and carrying on” and anything similar that’s cute enough to post on Facebook seems to do the trick to alter human experience, if only momentarily. To combat workplace stress, companies are now eager to support sabbaticals and career breaks and France’s recent ‘right to disconnect’ law even outlaws after-hour work emails.

However, all these measures seem cosmetic and the West is now slowly coming to realise the limitations of psychology and new-age management theories in addressing the problems of human wellbeing. While many in the West have reacted by incorporating yoga into their gym schedules, there are others however, who are on a mission to transform the human experience, by avoiding at any cost, the chanting of Om.

For instance, some of the latest research in the West is around “consciousness hacking”, “neuro-hacking” and the “science of flow” – all of which attempt to achieve altered states of consciousness through technology or learnings, relying on the usual Western methods of data and information gathering, this time mainly biometric.(1) The desperate search for an enhanced human experience is leading the West towards a greater focus on the senses and a greater dependence on external solutions, be it drugs or technology, that attempt to tinker with the brain and body in order to alter consciousness.

These new approaches, are touted as the secrets of the ‘elite’ high performers in the West in domains ranging from sports to investment banking.(1) The primary focus of this latest research is to make humans more effective and enhance performance and productivity. Basically, to ‘DO more’. But how is this any different to what Western societies have been doing for centuries, focusing on higher productivity, ‘doing’ and chasing after some goal or thing to make them happier? From the perspective of Eastern spirituality, the Western habit of filtering everything through the mind and senses needs to be transcended if consciousness is to be elevated, but it is precisely this which is being indulged further and further, without the understanding that it is the “problem”, not solution. ‘Accessing flow’, an apparently transformational new technique touted by Jamie Wheal, director of the Flow Genome Project, is motivated by chasing a certain experience, the ‘flow state’, without the recognition that ‘experience chasing’ is the problem itself.

What is clear is that the Western thought and science is missing a fundamental understanding of human beings and life. The West is obsessed with information but lacks real knowledge. It is focused on outer purpose, but ignores the inner dharma of human existence.

For those like me who feel queasy about the idea that the next stage of human evolution involves taking your pick between the West’s offerings of drug prescriptions and laser brain therapy, there is good news because the ancient saints and rishis of our country found a better way. India’s spirituality offers all of the solutions the world is seeking and much more and only requires a human being to turn within rather than say, invest in a ‘mind control headband’ – one of the latest ‘promising’ tech innovations out of the West. There is also nothing ‘elite’ about this knowledge as India’s sages have always believed it to be universal and to be freely shared, to the extent that many of our ancient scriptures bear no names of authors.

There is a denial in the West about the so called Eastern mysticism that perhaps stems from an historical complex of seeing themselves as the torch-bearers for the world and of carrying an imaginary burden of having to redeem humanity with their brilliance. Or perhaps it is the reaction of religious conditioning, of the habit of chasing data and experiences or merely a reaction to the twisted versions of Indian spirituality popularised for decades in the West. But this time, with the tremendous levels of empowerment through modern technology, their efforts could actually end in disaster, if the requisite consciousness to accompany them is missing. It is indeed worrying to learn that Silicon Valley billionaires like Elon Musk are investing millions to find a way out of this world that they are convinced is a computer generated simulation. They have perhaps been inspired by the concept of the physical world as illusion or maya as long held in Indian spiritual traditions, but their proposed ways of coming out of it would appear simply childish and immature were it not for the fact that they also imply a waste of resources and could be potentially dangerous.

The world needs India now more than ever to spread its knowledge of a blissful existence in harmony with all other life. Sri Aurobindo’s words from the early 1900’s couldn’t be more fitting today, over a hundred years later:

“There is a mighty law of life, a great principle of human evolution, a body of spiritual knowledge and experience of which India has always been destined to be guardian, exemplar and missionary.” (2)

“The time has almost come when India can no longer keep her light to herself but must pour it out upon the world. Yoga must be revealed to mankind because without it mankind cannot take the next step in the human evolution.” (3)

India needs to shine forth its spiritual light onto the world by first rediscovering it for itself, which would require taking off some of the blinders of Western thought that don’t serve us. Sri Aurobindo also pointed out the danger of India trying to ape the West and although he was referring to the 19th century India, his words appear to be equally applicable to 20th century India as well:

“The nineteenth century in India aspired to political emancipation, social renovation, religious vision and rebirth, but it failed because it adopted Western motives and methods, ignored the spirit, history and destiny of our race and thought that by taking over European education European machinery, European organisation and equipment we should reproduce ourselves European prosperity, energy and progress.” (2)

India’s role is vital in directing the world from senses-based information gathering to true knowledge based on realisation of the Self. Fortunately, the profound knowledge of India’s ancient sages has not been lost and even today, wise and enlightened sages and gurus walk this land, establishing dharma among the people and ensuring that India rises and reclaims its sanatana dharma. If the world has to turn within, first India must turn inward and rediscover the repository of knowledge of which it is the custodian.

Because Hindu thought has always accepted and even encouraged a spirit of enquiry, the knowledge it has discovered is unparalleled in profundity. Sanatana dharma is not staked on a dogma, book or belief but on the ever-present truth and reality of existence. Centuries before Socrates became popular for asking lots of questions, the method of questioning (the main tool for “Jnana yoga”) was used in India to discover profound existential truths. And the answers too were received – not through gathering material data or through learned theories, but through inner experience. Fortunately, the way of Indian sages from Adi Shakaracharya to modern-day gurus, has been to invite questioning and encourage logical debate. And fortunately, every Arjuna that expressed a true longing to know and be something more, was not told to blindly believe in God. And we’re very glad that Krishna didn’t simply tell him to “keep calm and carry on” either.  Or worse, artificially manipulate his brain waves with a mind-control headset, to get him to shoot that arrow.

Perhaps all this Western enthusiasm of finding a better way will eventually lead it onto the same path pointed to by India’s spiritual tradition. While that would be the best and likely safest outcome for the world, it would be a very long and roundabout way of getting there, with a greater than necessary indulgence in ignorance.

(1) See work being done by The Neurohacker Collective, Quantified Self and Flow Genome Project.

Shruti Bakshi is a finance professional holding an MBA from INSEAD and an MPhil in Finance from Cambridge University. Having spent a decade living and working in Europe, she now resides in Gurugram. She writes on spirituality at https://stumblingintolife.com Twitter: @shruti_paris.