Hindus must reclaim their history 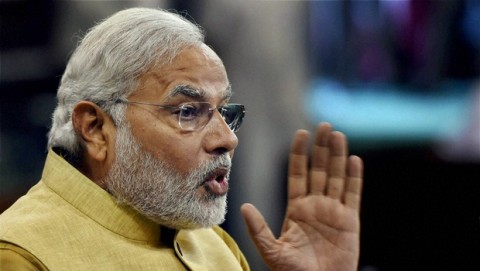 In an opinion piece in Outlook (“Chaining 1200 years”, 7-7-2014), Hasan Suroor takes issue with PM Narendra Modi’s diagnosis that Indians suffer from a slave mentality due to “1200 years” of oppression. He thereby defends the central falsehood that the Marxist historians have introduced into Indian education, viz. that British rule was colonial oppression while he preceding Muslim regimes were somehow indigenous. Fortunately he makes no secret of where he himself stands: by classifying Makkhan Lal as “ pro-RSS historian” but praising his opponent Mushirul Hasan as a “noted historian”, he plays the well-known Leftist game of denouncing the other as ideologically biased but their own as wearing the mantle of objectivity.

The respective language policies already give the true story. The British are remembered for imposing English as language of administration and partly of education. But firstly, this was introduced against a faction of administrators, the Orientalizers, who had preferred the use of native languages (a faction unknown in the Muslim regimes), and secondly, every British official had to take an exam of “Hindustani” before even being posted to India. The Muslim rulers had mostly not even bothered to learn an indigenous language and at any rate kept on using Arabic and then Persian as the medium to administer India. If any degree of colonialism can be made, Muslim rule was definitely more colonial than British rule.

To be sure, though Muslim regimes typically started out as based in Central Asia and then expanded into India, they all lost their bases outside India to their local competitors and then had to make do with India. But that doesn’t make them less foreign. The White regimes in Rhodesia and South Africa were also nominally independent from the European motherland but were nonetheless treated as hold-overs of colonialism.

The British exploited India? So did the Muslim regimes. Land tax was very high under the Delhi Sultanate and peasant famines as frequent as under the British. Moreover, apart from their negative effect on Indian society and the economy, the British cloud also had the silver lining of modernization, as physically represented by the railway system. They “enslaved” India but also brought the abolition of slavery (which they forced the Moghul and Ottoman empires to abolish as well). The Muslim regimes cannot boast of a single such contribution. On the contrary, they destroyed the Indian universities and brought only the sterile dogmatism of Islamic theological academies in return.

As for “1200 years”, Suroor rightly considers this inaccurate, as Muslim rule started in Sindh 1300 years ago, in most of India centuries later, and in some pockets never at all. He also has the merit of pointing out that it was effectively over in the 18th century, as not the British but the Marathas broke the back of the Moghul empire. So, he is right on this, but then, Modi’s political speech was not a Ph.D. dissertation. At any rate, the fuss about the exact number of years was only meant to belittle Modi’s message, which is in essence that Muslim rule deserves to be classified as oppressive and colonial.

Suroor’s article is part of the “secularist” attempt to keep control of Indian history. Not just the institutions, where the Modi regime will have a hard time introducing more objective historians against the anti-Hindu lot presently ruling the roost. But more importantly, the general public’s perception of Indian history, which Suroor’s own kind has tried to slant communally.

In fact, experience teaches that the Marxists have little to fear from the BJP. The textbook reform by Murli Manohar Joshi of circa 2002 was a failure. Subsequent Indologist conferences which I attended all had sessions on history-rewriting, where the mood among the mostly anti-Hindu scholars was upbeat and in expectation of a further decline of any Hindu activism. The conclusion came down to: “The Hindu nationalists are unspeakably evil, but fortunately, they are also abysmally stupid.” The Hindu movement has never bothered to invest in scholarship and even after Modi’s accession to power, it simply lacks the historians equipped to effect the glasnost (openness) which this Marxist-controlled sector urgently needs.

Regardless of this power struggle between contending views of history, however, at a deeper level, the established historians have already lost the battle. Of course, the anti-Hindu school has the key positions both in the relevant Indian sectors (including Bollywood) and in the foreign India-watching institutions, so they still keep the lid on this development. But they have suffered some embarrassing defeats.

Huge defeats for the Marxists

On Ayodhya, for more than twenty years, they have managed to make the world think that history is being falsified by Hindu extremists asserting that the Babri mosque there had been built in forcible replacement of a Hindu temple. This was in defiance of the preceding consensus among all the parties concerned that there had indeed been a Hindu temple at the site, as still asserted in the 1989 edition of the Encyclopaedia Britannica.

But suddenly the consensus reversed, not because of any scientific discovery, but because of political compulsions.

Like babes in the wood, all the India-watchers worldwide started toeing this new line and lambasting the Hindus for “falsely” staying true to the old consensus. One Dutch professor who had personally registered evidence for the temple, felt compelled to eat his own findings and parrot the new consensus. Unfortunately for all of them, the Archaeological Survey of India (2003) and the Allahabad High Court (2010) reconfirmed the old consensus: of course, a Hindu temple had stood at the site and had been forced to make way for the mosque. So, all these Leftist efforts to impose a rewritten version of history have been in vain. Moreover, in her recent book, Rama and Ayodhya, Meenakshi Jain has documented what a sorry figure these supposed “experts” have cut when they were questioned in court during the Ayodhya proceedings. One historian after another was forced to admit that he didn’t really know, that he hadn’t been to the site though pontificating on its archaeology…that is it was all just a hypothesis. So, those were the people who had been cited as authority by all the politicians, journalists and India-watchers. If the truth of their politically motivated deception is given proper publicity, their game will be over forever.

On Nalanda, the Left has staged a really daring history falsification. This Buddhist university, then the biggest in the world, was destroyed by Bakhtiar Khilji’s mujahedin in 1194, and has recently been refounded under tight Leftist control. Today, Buddha is being used as a weapon against Hinduism, so the anti-Hindu forces would like to take possession of the memory of Nalanda. Unfortunately, that would normally force them also to memorize the way in which the historical Nalanda University had disappeared.

Well, in 2004, the then president of the Indian History Congress managed to put the blame on the Hindus and simply ignored the true story, though as usual it had been proudly proclaimed by the Muslim perpetrators themselves. As Arun Shourie has shown (“How history was made up at Nalanda”, Indian Express, 28 June 2014), the IHC eminence violated all the norms of his discipline by citing a hearsay foreign document of five centuries later, and only giving a manipulated quote from it, all while keeping out of view the real, immediate and contemporary testimony. The historical fact that Nalanda was destroyed by warriors for Islam still stands, but the reputation of this prominent Leftist historian among his many parrots should be revised.

The anti-Hindu bias taught by the History professors also translates into a bias on contemporary matters, where it has not fared better. In autumn 1996, I attended the Annual South Asia Conference in Madison, Wisconsin. The NDA alliance led by the BJP had been in power for 13 days and was widely expected to accede to government for real. The Indian, American and Indo-American academics at the conference outdid each other in doomsday predictions: Fascism was going to be installed, the Muslims were going to be thrown into the Indian Ocean, the Government was going to come down on Dalits/women/artists/journalists, India was going to attack Pakistan, and so on. The BJP did come to power in 1998 and led the government till 2004, yet nothing at all of these dire forecasts came true. The BJP observed all the democratic procedures, Pakistan attacked India (Kargil) but not the reverse, and on the social front nothing sensational happened, except that the economy boomed. Rarely has an army of accredited “experts” been proven so completely wrong.

In 2002, in spite of BJP rule, Muslims felt confident enough to start a pogrom of 59 Hindus in Godhra. This is a hugely significant point that commentators, sociologists and experts of every hue have succeeded in burying. Hindus had not reacted to a series of Islamic terrorist acts including attacks on the Parliament buildings in Srinagar and Delhi, but this time they finally did. Communal riots ensued, killing some 800 Muslims and 200 Hindus. Bad enough, but by Congress standards not that unusual: the 1984 massacre of Sikhs by Congress Party activists killed 3000, and afterwards Congress leader and former Prime Minister Rajiv Gandhi had only seen fit to minimize the issue. This time, however, the man in charge had the wrong political colour: Gujarat Chief Minister Narendra Modi. He was accused of being complicit in the riots, or even of having organized them. Though he was campaigned against and scrutinized like nobody before him, he was repeatedly cleared by the courts. All the Indian and foreign “specialists” who go on accusing him, are simply in contempt of court.

Moreover, Narendra Modi has been accused of piloting history textbooks that praised Adolf Hitler and denied the Holocaust. Naturally, this propaganda offensive too has been copied in media around the world. However, investigation of the textbooks showed that these did not praise Hitler, did mention the Holocaust, and had been issued by a previous Congress government anyway. But this follow-up did not get any attention in the world media. The slander may have been successful in the short run (I heard it cited and discussed in all seriousness in a session on Hindu-Jewish relations at the American Academy of Religion Conference in 2009), but truth has a way of prevailing in the end.

Modi’s accession to power and the respect he clearly enjoys among the neighbouring governments (and even in the US, which has to rescind its visa ban against him, in spite of the pressure by Indo-American Leftists) may well be an apt occasion to rethink our attitude towards the ideological power struggle in India. So far, Indians and foreigners, and even many inside the BJP, have looked at India through the glasses which the wrongly-named “secularists” have put on their noses. Millions of people busy with other things have relied on the “experts” to decide for them what is what, not realizing that the positions normally associated with expertise have been cornered by a politically motivated school. It is time to change this power equation.

Meanwhile, we can already free ourselves from this school’s exceeding sympathy for the Muslim regimes in Indian history. These regimes were part of a long intermezzo of oppression, which has conditioned the minds of the Indians (especially of those people loyal to the native civilization) to attitudes of servility. It remains to be seen whether Narendra Modi’s government will live up to the expectations. But by publicly redefining the intermezzo of colonization as including the Muslim period, he has already changed the terms of discourse.