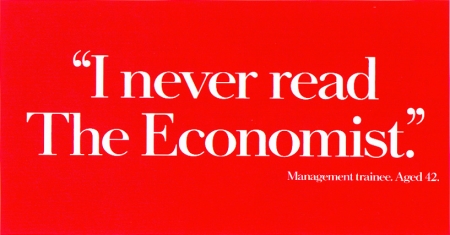 First, the world’s largest democracy needs no backing of anybody except the Indian voters, let alone a foreign rag named “The Economist.” For all we know, this rag’s footprint across the world cannot beat the number of voters participating in this mammoth exercise. India and Indians function perfectly well without any support and/or backing of the Economist. Neither are Indians particularly asking for it.

And here’s precisely where the duplicity sets in. Even this advice-dispensing rag needs to rant against the BJP‘s Prime Ministerial candidate,  Mr. Narendra Modi to increase its eyeball count.  At least that much is obvious from its latest attention-seeking piece, which has been cynically economical with the truth.

And so this piece is aimed, with great compassion, at helping the miserly Economist with some home truths. Perhaps the Economist too realizes that gone are the days when what was spoken or written in the mainstream media was accepted as Gospel Truth. Even as the supposed watchdog of a democracy over the years became a faithful dog of Governments, an unforgiving social media has emerged as the alternate media, ripping their lies apart.

A dose of Truth for The Economist

Even a cursory study of the Economist’s article is highly revealing.

Just so that the rag can appear unbiased, it starts with deploring the Congress corruption, before charging full steam with an unbridled rant against Narendra Modi. The Economist’s idea seems to be to preempt any future negative feedback with, “but we have spoken against Congress too.”

Lie 1: Mr Modi had helped organise a march on the holy site at Ayodhya leading to death of 2000 in Hindu-Muslim clashes.

This is like saying the Economist helped India’s Economic revolution of 1991 leading to millions of lives being benefitted.

Lie 2: The reason begins with a Hindu rampage against Muslims in Gujarat in 2002, in which at least 1,000 people were slaughtered.

This is strictly not a lie but a clear case of misleading the reader. If you ask a student preparing for the English comprehension paper for the CAT exam to read the article and tell how many Muslims died in Gujarat 2002, the answer will be ‘at least 1000.’ The truth : Statement made in Rajya Sabha by Congress Minister of State for Home Affairs on 10 May 2005 : 790 muslims and 254 Hindus . And so, just for the above statement, the Economist should be condemned for journalistic terrorism, Nothing less.

Lie 4: One reason why the inquiries into the riots were inconclusive is that a great deal of evidence was lost or willfully destroyed.

Many Muslims and Hindus have been convicted and incarcerated (including a BJP minister). But if Modi is given clean chit by a SIT (a team of specially selected experts by India’s Supreme Court), then the ill-intentioned Economist counters it with ‘evidence was lost of willfully destroyed.’ Perhaps the definition of journalistic ethics at the Economist is elastic when it suits their predetermined purposes.

But that does not answer a crucial question: what about the evidence that was not destroyed, so diligently brought forth by Teesta Setalvad? The answer: the courts found that every single exhibit of the 13 evidences of murder and rape by Hindus to be carefully concocted by her and her NGO. (It is also not entirely coincidental that before this court finding, she was duly awarded the Padma Bhushan by Congress Government at the Centre perhaps to lend credence to her claims). Occasional evidences coming from Pradeep Sharma and Vanzara (given huge publicity by the anti-Modi media) have found to be eventually fabricated and false.

Truth be told, the Economist simply hates Modi’s guts. More fundamentally, the root of all hate is fear.

The longer explanation is that Narendra Modi is proudly Hindu and doesn’t play the communal, divisive or appeasement politics of the Congress. Equally, that doesn’t make him anti-Muslim. Indeed if the Congress party’s claim or the Economist’s “logic” were to applied, it amounts to saying that Hinduism is anti-Muslim. If that were true, would the Economist also say that Islam is anti-other religions because only a Muslim can go to Jannat (Paradise/Heaven), and all non-Muslims are Kafirs?

Indeed, the Economist needs to be publicly shunned for denigrating the oldest and the most inclusive and pluralistic civilization on the planet, Hinduism. One would also advise the Economist to read: “Man and myth collide as Modi eyes final ascent to power.“

Clearly, the so-called communalism of Narendra Modi who never used the word “Hindu” – as per a study by the Outlook magazine of Modi’s 68 speeches, he has used the word “Development” more than 500 times– doesn’t match up to the Economist’s twisted standards of secularism.

Lie 5: He could put the pogroms behind him by explaining what happened and apologizing. Yet he refuses to answer questions about them.

At this point, we seriously wonder whether the Economist has even heard of something called Google. Or the World Wide Web. Or the SIT (Special Investigation Team) who grilled Modi not once or twice but five times. Everything has been explained, if only you care to listen or want to know! As for apologies, was George Bush asked to apologize for attacking two countries, both under false pretexts, killing millions of people? Besides, why should Modi apologize for doing his best to contain the violence? Would the head honcho of the Economist apologize for doing his best to provide quality content in his magazine? Perhaps he should, after reading this article.

But let’s give the devil its due. And so, just for the record, although Modi need not have apologized for having done his best, here’s what he actually did at the time of the riots:

Lie 6: Mr Modi has refused to wear a Muslim skullcap.

The childish Economist fails to grasp a simple fact that there is a difference between personal preference and the work he has done for the Muslim community. Since 2002, no riots have happened in Gujarat and the Muslim community feels safe and cared for in Gujarat. A chance visit to Gujarat could clear the muddled Economist’s misconceptions. The rag must have missed what real Muslims living in Gujarat have written on this topic:  Debunking the ‘facts’ on Narendra Modi and Muslims. Of course there are bigger issues like Muslims refusing to sing India’s national song ‘Vande Mataram’. But well, the Economist seems to have conveniently omitted that.

Earlier on in the article, the Economist mentions that in 2002 Mr Modi was chief minister and he was accused of allowing or even abetting the pogrom.

Credit where credit is due. Actually, this was true. But in the past. Cut to the current time–Modi has been exonerated of this charge by the highest court of the country at least 2 years ago whereas time has stood still for the Economist.  Moreover, on the very day the Economist published this fraudulent piece came a news headline: Supreme Court of India Praises progress made by SIT.

And even now, raking up the issue on the pretext of ‘evidence lost or destroyed’ could easily be held as contempt of court. Perhaps the Economist would peddle this piece in an Indian court of law. Or perhaps a conscientious lawyer would like to take the Economist matter the legal route.